How schools can increase student interest in STEM careers

It’s general knowledge, at this point, that STEM graduates are in short supply. Educational institutions are bursting with campaigns to get students more excited about math, engineering, and science classes. But why the urgency?

Estimates in 2012 predicted a need for 1 million more graduates with STEM degrees in the next decade than the current track will produce, in order for the US to be able to have a solid economy in the coming years. That’s 100,000 extra people entering STEM fields every year. With college enrollment decreasing, that’s a lofty goal.
In order to combat this insufficiency, more students need to pursue STEM degrees. But attracting and retaining students on STEM career paths is no easy feat, and traditional methods clearly haven’t been effective. In fact, only 40% of students who enter college intending to pursue a STEM track end up actually graduating with a STEM degree.
That means that more than half of students who were originally interested in STEM careers change their minds somewhere during the course of their education.
Increasing student excitement for STEM careers is vital to combat the growing deficit in competent graduates.
While the addition of technological components like virtual laboratory simulations to traditional courses has already been shown to positively impact learning outcomes, recent research explores whether virtual labs could be an effective tool for boosting student interest in STEM fields.
Read on to see what the study uncovered.

Social Cognitive Theory (SCT) was developed by Albert Bandura and posits that learners can acquire new knowledge and behaviors simply by observing someone else. It works off of the assumption that people are motivated to work toward goals, especially when they think they’re achievable or when there is continual encouragement to keep working.
In other words, high self-efficacy and positive outcome expectations increase the likelihood that someone will be interested in or work hard at a given subject.
SCT is intricately related to career choice, including the development of career interests, deciding on subjects to study, and persisting in academic pursuits.
It makes sense: if a student thinks that she is good at math, has repeated positive outcomes on math assignments, and receives continuous feedback for improvement in math, then her interest in math is likely to be high, and she’s much more likely to choose math as her course of study. 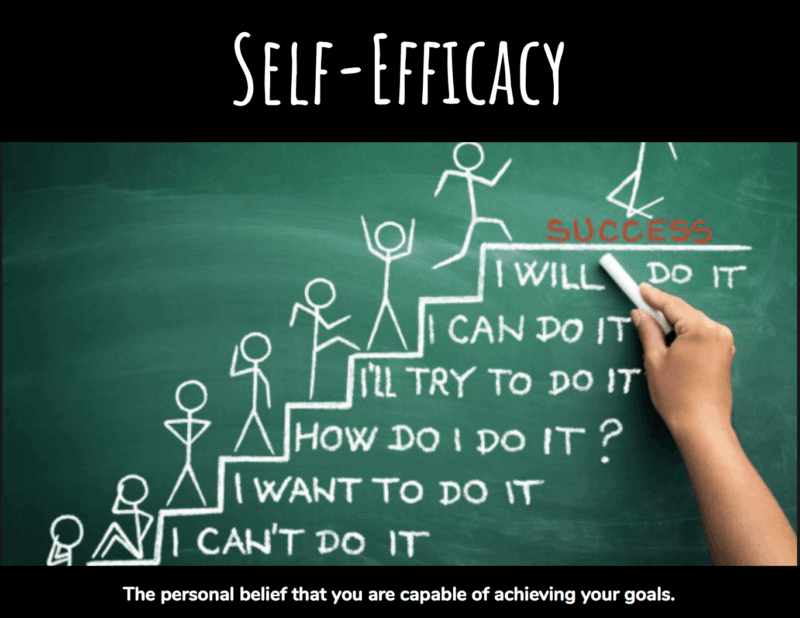 In short, high self-efficacy increases interest, which leads to intention to pursue a degree in the field. Increased intention means a lot more students taking action to get STEM degrees.
So, if educational institutions can figure out a way to increase student self-efficacy across the board in STEM courses, then we’ve moved a step down the road toward solving the overarching problem with STEM student interest and retention.

The documented impact of simulations on education

The benefits of incorporating virtual lab simulations into education have already been well documented. In previous research, simulations used in conjunction with traditional instruction were shown to increase learning outcomes significantly compared to a lecture on it’s own.
Other documented benefits of simulations include:

The reported effects of simulations on learners include development of career-relevant practical skills–aseptic technique, for example–as well as increasing students’ intrinsic motivation to learn course content. These are benefits that a traditional classroom environment simply cannot supply, due to constraints like time, cost, and equipment.
This is not to say that virtual simulations are superior to regular instruction, but rather that incorporating simulations into traditional courses of study can bring students to levels of achievement they otherwise may not have reached. Using simulations as a supplement to, rather than a replacement for, traditional classroom learning can provide invaluable academic benefits.
However, while the positive effects on learning outcomes have been well studied, there is a lack of research investigating the effects of simulations on student self-efficacy and interest in STEM subjects. A group of researchers in Denmark noticed this, and performed a study hoping to measure the effects of simulations on non-cognitive outcomes.

With the academic benefits of simulations in mind, researchers began to look at the potential impact of Labster virtual laboratory simulations on self-efficacy and student interest.
The study took place on biology students in four high schools in Denmark. Students in the sample were divided into two groups, each of which played one simulation and attended one normal class covering the same content. Students took a comprehensive assessment of non-cognitive as well as knowledge-based outcomes before, between, and after the lessons.

In agreement with prior research, the study found a significant increase in knowledge-based outcomes when students used a simulation as opposed to a lecture, while using both together was the most effective of all. 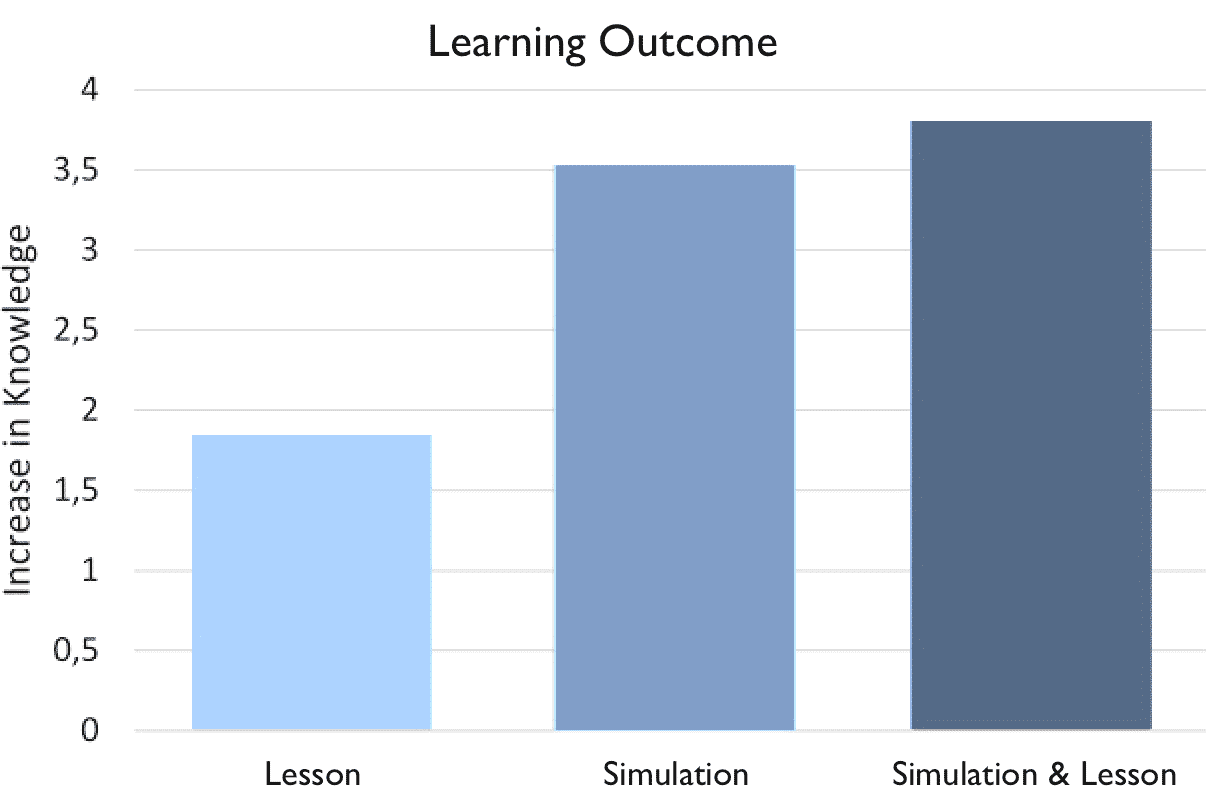 The study also found that the simulation increased intrinsic motivation and outcome expectations, but not to a degree significantly different than the traditional lesson. Overall, the effect of simulations on non-cognitive outcomes was only slightly greater than the effect of the normal lesson, and not to a significant degree.
However, the study results support the idea that increased self-efficacy impacts interest in course content, and that simulations could affect career choice through their impact on self-efficacy.
The simulations increased student self-efficacy more than the classroom lesson did. Notably, students were also significantly more interested in biology-related tasks after the simulation, while the normal lesson did not significantly increase interest. This suggests that simulations can, in fact, increase student interest in STEM careers.

So what’s the point?

The STEM gap is a complicated problem, with no perfect solution. However, based on Social Cognitive Theory, the introduction of educational components that increase student self-efficacy are one possible way to get more students excited about course content and careers in STEM.
Labster virtual labs have been found to significantly increase student self-efficacy in several studies. To learn more about Labster’s effects on classroom education, read the articles published in in Nature Biotechnology and BMC Medical Education, or explore more on our research page.
This study linked the increase in self-efficacy to a potential long term boost in student interest in corresponding careers. According to SCT, increased interest in STEM careers will increase the number of students intending to pursue a STEM degree. In other words, virtual labs can be part of the solution to bringing more students into STEM.
By implementing simulations and other self-efficacy-increasing measures into traditional courses, educational institutions can hopefully increase the number of students on STEM career paths, and combat the growing STEM graduate deficit.

Sign up to our newsletter to stay up to date with the latest in science teaching and learning.

We Can Make Virtual Labs Work for You

Dr. Brian Harfe
University of Florida
Talk to us

Decide which cookies you want to allow. You can change these settings at any time. However, this can result in some functions no longer being available. For information on deleting the cookies, please consult your browser’s help function. Learn more about the cookies we use.

With the slider, you can enable or disable different types of cookies: