5 Ways To Get Students Energized About Embryology 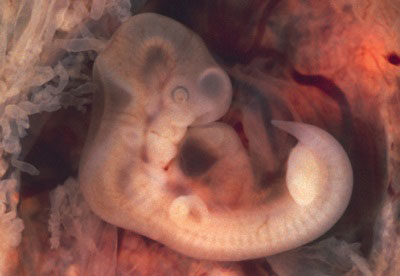 Have you ever wondered how a  single cell can turn into a  complex human?

Embryology is the steps by which an organism develops from a unicellular zygote into a multicellular organism. Embryo development is complex and well-regulated. The  development of the human embryo  is divided into  the following progressive phases:

The human embryo is regarded as a fetus nine weeks after fertilization. There is no unique feature that differentiates the embryo from the fetus. The term fetus suggests that the embryo can be perceived as a human. The embryo is pink on a  red background. The embryo has a  slightly rounded part at one end with an extended tail-like piece that is bent in a C-shape. Two small bumps are visible on the sides,  where the limbs will later form.

Read on why this can be a daunting topic for teachers and students,  five suggestions for improving the learning experience, and thoughts on why virtual labs make things easier.

Why Embryology Can Be  Difficult

There are three reasons why embryology can be difficult for even the most academically sound students.

Before the popular use of the microscope and the birth of cell biology in the  19th century, embryology was based on descriptive and comparative studies. Not being able to visualize the process can frustrate learning and make it difficult for students to stay excited.

Each cell contains the whole genome (a perfect genetic blueprint),  but only a specific set of genes is expressed at any given time. The set of expressed genes gives the cell its traits,  functions and, if necessary, specialization. It is an ever-changing process in which gene expression is turned on and off in response to internal and external stimuli. A gene is said to be expressed when it is transcribed and a  functional product is produced. The direct products of transcription are RNA molecules: messenger RNA (mRNA), regulatory RNA ( such as miRNA), or structural RNA ( such as rRNA). Regulatory and structural RNA is already a  functional product,  while mRNA needs to be translated into protein. In the case of protein-coding genes, the abundance of mRNA reveals the level of gene expression. Various techniques can be used to measure gene expression levels,  such as next-generation sequencing or quantitative PCR.

Embryology provides proof of interrelationships between very diverse groups of organisms today. Mutational changes in embryos can have serious outcomes in adults so embryonic development tends to be preserved. As a result,  structures absent in some groups often appear in the embryonic form and disappear when the adult or juvenile form is attained. For example, all vertebrate embryos,  including man,  exhibit gill and tail slits at some point in their early development. They vanish in adults from terrestrial groups but persist in adults from aquatic groups such as fish and some amphibians and humans have a tail structure during development that is missing at birth.

Model organisms are species used to study certain aspects of biology and are non-human species that can be studied notably to understand certain biological phenomena in the hope that discoveries in model organisms will offer insight into how other organisms, especially the human body function. The following is a  list of common  model organisms:

Each has specific advantages. The type of experiment will determine the choice of animal to use. The following advantages of model organisms apply to different degrees for each model organism.

Now that you have a good foundation let's go over five ways you can make embryology lessons more interesting, easier, and fun for you and your students.

Proposed by Marcello Malpighi, early embryology is known as preformationism, the theory that organisms evolved from pre-existing miniature versions of themselves. Aristotle proposed the now-accepted theory of epigenesis. Epigenesis is the idea that organisms develop from seeds or eggs in a series of steps. Modern embryology evolved from the work of Karl Ernst von Baer, ​​ although close observations were made in Italy by anatomists such as Aldrovandi and Leonardo da Vinci during the reawakening era.

2. Relate to the  real world

Gallus gallus domesticus (chicken) is an important model organism for developmental biology. Chicken domestication is an activity that has been going on for more than 8,000 years. The earliest reference to the chicken as a  model organism is attributed to Aristotle, who described the chicken embryo in his Historia Animulum. Chickens are great model organisms because eggs are readily available and can be used to observe and manipulate live embryos. The relatively large size of the embryo makes it easy to observe the embryo.

By the time the chicken egg is laid, the embryo has divided and has begun gastrulation, forming a bilayered blastoderm of nearly 60,000 cells. If the eggs are not incubated,  development practically stops at this stage but continues as the temperature rises. Chicks hatch 21 days after oviposition. The stages of development of the chicken embryo are defined in the Hamburger-Hamilton series.

Place the egg sideways in the incubator and mark the top surface of the egg with an X. The yolk rotates so that its brightest point, the embryonic blastoderm, rotates from below the air chamber to its highest point. Therefore X  indicates the position of the embryo. Incubate eggs at high relative humidity (>50%) and in the range of 37. 5 to 39°C.

Now observe the embryo under a dissecting microscope. Ensure to close the tape before incubating,  otherwise, the eggs will dry out. Chicken embryos are ordered according to a series known as the Hamilton and Hamburger series. Each phase is labeled and timed and fully identifiable. Estimated time is:

The rat (Mus musculus) is a  classic mammalian model. The genetic and physiological similarities to humans,  combined with short generation times and low maintenance costs,  make them ideal model organisms. There is a  complete catalog of mouse strains that have been genetically engineered to study certain diseases that would not occur naturally in mice. The data obtained from this study is an additional advantage of mice over other mammals.

Using next-generation sequencing (NGS), a massively parallel sequencing technology that offers ultra-high scalability, and speed. This technology is used to determine nucleotide sequences across the genome or target regions of DNA or RNA. NGS is revolutionizing the biological sciences, enabling laboratories to perform various applications and study biological systems at a level never before possible and permitted, sequence the whole genome on the fly, sequence depth of the target region, use RNA sequencing (RNA-Seq) to discover new RNA variants and splice sites or to quantify mRNA for gene expression analysis, analysis of epigenetic factors such as genome-wide DNA methylation and DNA-protein interactions, sort cancer samples to check for rare somatic variants, tumor subclones, explore human microbiome and Identification of new pathogens.

Liebenberg syndrome is a  condition that involves abnormal hand development,  resulting in distinct hand deformities of varying severity. In people with this disease, the bones and other tissues in the elbows, forearms, wrists, and hands show specific similar structures to the lower extremities. Liebenberg syndrome is characterized by stiffness of the elbow joint and fusion of the wrist bones. The arms of the Liebenberg patient generally resemble the legs. This partial transformation is caused by faulty homeotic gene expression.

Liebenberg syndrome is inherited dominantly. There is currently no cure,  but it is possible to surgically remove some of the wrist bones to create more correct wrist function.

A good mnemonic for the progressive stages of human embryonic development is FaCt By GlOVe excluding lowercase letters as shown:

A unique way to teach embryology is through a virtual laboratory simulation. At Labster, we’re dedicated to delivering fully interactive advanced laboratory simulations that utilize gamification elements like storytelling and scoring systems, inside an immersive and engaging 3D universe.

Check out the Labster embryology simulation that allows students to learn about embryology through active, inquiry-based learning.

Learn more about the embryology simulation here or get in touch to find out how you can start using virtual labs with your students.