Figure: An image of human nervous system from the Labster’s theory.

Why the nervous system can be tricky to learn

The nervous stem consists of several structures, each with its own function. Three reasons explain why students find it difficult to learn the gross function of the nervous system.

Students learn about nerves, neurons, and ganglia in the nervous system, which are very small in size. You need to use an electroscope to see these objects. Sometimes, students may find it hard to learn abstract concepts. The reason is that they read the structure of neurons and nerves, but they cannot imagine these structures.

Since we are familiar with the reasons that make the gross function of the nervous system difficult to understand, five ways make this simpler and easier for learners.

1. People behind that science:

Herophilus was a physician often known as the “Father of Anatomy,” who differentiated the nerves from the blood vessels. He explained that nerves of the spinal cords are directly attached to the brain. He discovered seven cranial nerves and sperate the cerebellum from the cerebrum. He also identified optical nerves by the dissection of an eye. His dissections helped to identify the trigeminal nerve, hypoglossal nerve, facial nerve, oculomotor nerve, and trigeminal nerve. He correctly recognized that the nervous system produces and controls voluntary motions. Herophilus stated that nerves are responsible for the transmission of neural impulses.

2. Learn about the basic parts of the nervous system

The nervous system is classified into two main parts. Each part is made up of millions of nerve cells called neurons. These cells are responsible for sending and receiving signals through the body.

The brain is a complex organ that consists of four lobes. These lobes are the temporal lobe, occipital lobe, parietal lobe, and frontal lobe.  Generally, the brain is divided into three main parts; cerebrum, cerebellum, and brainstem. The brain plays important functions such as creativity, reasoning, touch, emotion, breathing, temperature, and vision.

The spinal cord connects the brain to the body. It starts from the bottom of the brainstem and ends at the lower back. There are 31 spinal nerves present in the spinal cord. The spinal cord has four main regions; cervical, thoracic, lumbar, and sacral. The spinal cord is helpful to control the reflexes responses, for instance, involuntary movement of your hand.

3. Explain the functions of the nervous system

Neurons are the basic units of the brain and the nervous system responsible for sending and receiving information between the brain and the other parts of the body. It consists of axons, dendrites, and a cell body. The image below represents the neurons' structures and the signal's transmission from one neuron to another. The color diagram helps the students easily understand the neurons' structure and function. 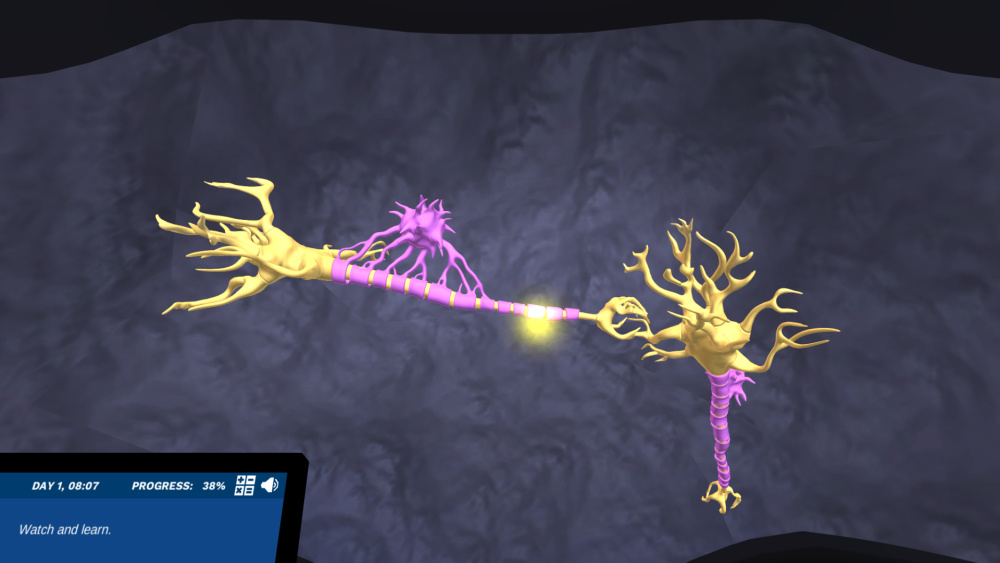 Figure: An image structure of neurons from the Labster’s virtual laboratory on gross functions of the nervous system.

The old methods of teaching the gross function of the nervous system through textbooks do not always seem interesting. Teachers may need to use new technologies like virtual lab simulations in the advanced world during class. Labster provides 3D simulations with gamification elements such as storytelling and the scoring system. It makes it interesting to learn a complex topic like the gross function of the nervous system.

Labster provides Gross Functions of the Nervous System simulation that give you a 3D animation of the topic. This simulation provides detailed information about the structural and functional comparison of the central nervous and peripheral nervous systems, chemical and electrical synapses, and the role of the types of neurons. Virtual lab simulation provides a detailed explanation of the tough topic, like the gross function of the nervous system, that can be helpful for students and also for teachers to convey the topic appropriately.

Check out Labster’s simulation of the gross function of the nervous system here, or get in touch to know how you can start a virtual lab with your students.