A benzene ring (or any aromatic compound) can be written as two different resonance structures, placing the double bonds in the ring in two different ways. Aromatic rings are hydrocarbons that contain benzene or another comparable ring structure. They are sometimes referred to as aromatic compounds. The six-carbon ring of benzene, C6H6, is frequently shown as having alternate double and single bonds. In reality, the structure of benzene is an average of the two structures, with each bond being in between a single and a double bond.

A conjugated system, which in general may lower the overall energy of the molecule and boost stability, is a system of connected p-orbitals with delocalized electrons in compounds with alternating single and multiple bonds. The system may contain radicals, carbenium ions, or lone pairs.

The image is showing the shifting of electrons and alternate double bonds step vise and at the end hydroxyl ion again gets the neutral charge.

One thing we need to keep in mind in conjugation is bond rotation.  Bond rotation is the rotation about the axis that connects the two connected atoms, with one end of the bond rotating and the other remaining stationary.

E and Z isomers can affect conjugation. Alkenes with higher priority substituents on the two sides of the double bond are called e-isomers. Alkenes with greater priority substituents on the same side of the double bond are called z isomers. The e isomer is more favored for the structure in terms of hindrance or conjugation than the z isomer.

Why can principles of molecular resonance be tricky topic?

There are many reasons this topic is tough. Organic chemistry is all about compound structures and their nomenclature. There are many types of bonds that are formed between compounds and molecules. It is difficult to study these topics, and it makes students exhausted. Some of the reasons of the toughness and dryness of this topic are as below:

When we talk about organic compounds, our primary focus is on carbon atoms. The carbon atom has millions of combinations with other compounds which include aromatic compounds, hydrocarbons, phosphorus group, halogens, and bonds with oxygen and nitrogen. Further, there are many types of bonds between atoms. Some of the types are ionic bonds, covalent bonds, double covalent bonds, triple bond, sigma bonds and pi bonds. All bonds have different characteristics and properties. Then, there is a mechanism of resonance that makes it possible for electrons to shift their places in the carbon ring with alternate double bonds. Conjugation is another concept that is of key importance in resonance and resonance and conjugated system work hand and hand. All these concepts have their own details and it comes as a very vast topic to cover. Therefore, students this topic a little tiring and difficult.

Some orbitals involve in resonance, which are p orbitals of atoms. P-orbitals of atoms make two types of bonds: sigma and pi, which were discussed earlier in the introduction. The understanding and illustration of these bonds is very important in order to understand this topic fully. This game of orbital and bonds is a little challenging for students but only initially.

The mechanism of molecular resonance is very important and highly organized. Students may forget the transfer of electrons at each step or the charge on an ion. It needs lots of practice to keep it in mind. When students read the topic, many confusions arise in their minds. We have read many things earlier, but studying this topic feels entirely different and complex.

In the previous section, we discussed the problems a student can face while learning molecular resonance. But it is said that there is a solution to every problem. So, these problems can also be tackled with the help of a few suggestions:

1. Read about the people behind the science:

In each era, science is taking steps towards advancement and technology. Scientists, chemists, physicists, mathematicians, and engineers are trying their best to solve the problems and to clear the doubts of coming generations. Therefore, there is advancement in organic chemistry and particularly in molecular resonance.

Some of the people which should be acknowledged for their work are:

The German chemist F.A. Kekule described the structure of benzene as a six-membered ring of carbon atoms in 1865. In order to make the structure compatible with the valence of carbon, he added alternate single and double bonds to the ring. In 1872, he proposed the hypothesis of an oscillation between structures to explain why no isomers of benzene had been found. The structures are of the form:

American chemist Linus Pauling proposed in 1931 that the normal state of the molecule can be represented as a hybrid of the two Kekule structures and the three structures of the form, which further clarified the structure of benzene.

Similar to this, the idea of resonance has been used to develop structures for molecules such as free radicals, poly-nuclear aromatic hydrocarbons, molecules with conjugated double bond systems (such as biphenyl and butadiene), and other molecules to which no satisfactory single structure in terms of single bonds, double bonds, and triple bonds can be assigned.

2. Take the concept with full attention and practice:

Distraction is the biggest hurdle in the way of effective learning. Especially in science, you have to imagine ideas in mind and propose them to others. Concepts are all about focus and attention. Molecular resonance and its mechanism is a challenging topic if you do cramming or something. Repeat practice of structures of aromatic compounds and their molecular resonances will lead you to an easy and exciting path. When you pay full attention and practice a lot, then you can also solve the resonance mechanism of any compound. You have to grab the concept and feel free to practice resonance mechanisms on different compounds.

3. Discussion and sharing of ideas:

The discussion comes with many answers and solutions to your ideas and queries. Students must share their knowledge of molecular resonance and bond types. This type of discussion will give students the confidence to present their idea and clear their confusion and it will help them to remember the different points of view about resonance mechanisms which will eventually help them to solve the questions.

Organic chemistry is all about ideas and their implementation. Visual representation of any idea is very effective and easy to understand. Colors and pictures add more interest to the topic. Visual presentation enhances the imaginative ideas of students and they can see what they imagined. It helps students to come up with the topic and take a better understanding of the topic. The same is the case with molecular resonance. 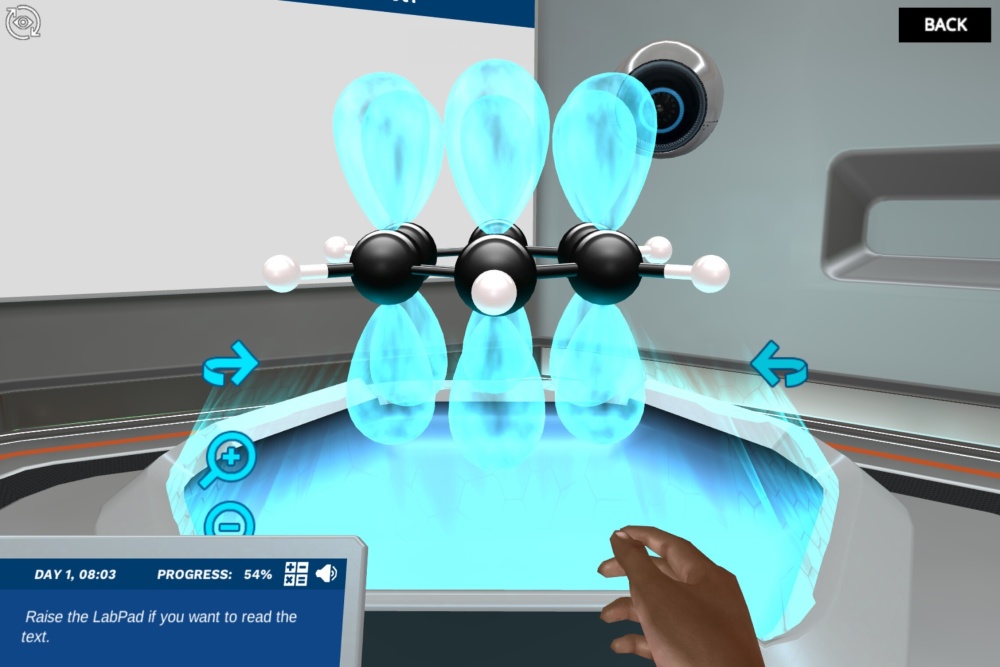 In the above image, it is clearly showing that how pi bond makes electron clouds on the compound of Phenol during molecular resonance. 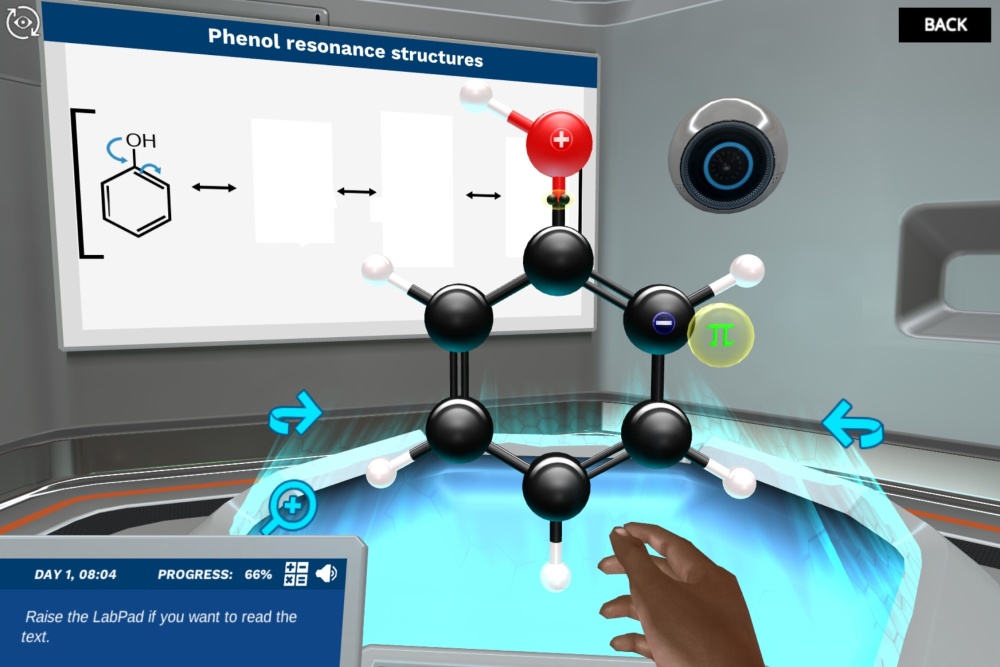 Figure: An image showing the mechanism of resonance in compound of Phenol from Labster's Principles of Molecular Resonance: Electrons like to travel Virtual Lab.

In the figure, the mechanism of resonance is taking place in Phenol. There is a clear presentation of sigma and pi bonds and a positive charge on hydroxyl ion, which will eventually turn neutral after resonance. You can observe the whole mechanism clearly in our next section.

A virtual lab is a platform to see the actual pictures of your imaginative ideas. Virtual labs are a great source of learning for students. At Labster, students can watch 3D simulations related to their topics. Students can also apply their knowledge. It’s about the experience of applying your knowledge and seeing the results.

Teachers monitor the activities of students. There is a scoring theme in Labster. Simulations are short and easy to watch. This platform help students gain confidence in their knowledge and encourage them to try more theories.

There is a 3D simulation in which you can see the whole mechanism of resonance in Phenol which we have verbally discussed earlier. It will clear all doubts of students, eventually making this concept a more interesting and exciting topic.Check out the Principles of Molecular Resonance: Electrons like to travel Virtual Lab