Structurally the peripheral nervous system is divided into sensory and motor divisions. The sensory neurons carry the term afferent functions because they transfer action potential towards CNS. Contrary to this, motor neurons have the term efferent functions because they conduct action potentials away from the CNS. The motor division can be further divided into somatic and autonomic nervous systems.

A neuron is the basic unit of the nervous system. There are different types of neurons, but all have primary characters like cell bodies, axons, and dendrites. The particular extensions in neurons (axons and dendrites) allow the neurons to communicate even across long distances. The network of nerves spread across the body helps transfer signals between cells, glands, muscles, and the brain.

The subdivisions of the nervous system are a complex topic for students because some key details make the topic lengthy and confusing. In this article, we’ll discuss five practical strategies that educators could apply in their classrooms to make learning this topic more approachable and a fun experience for students. 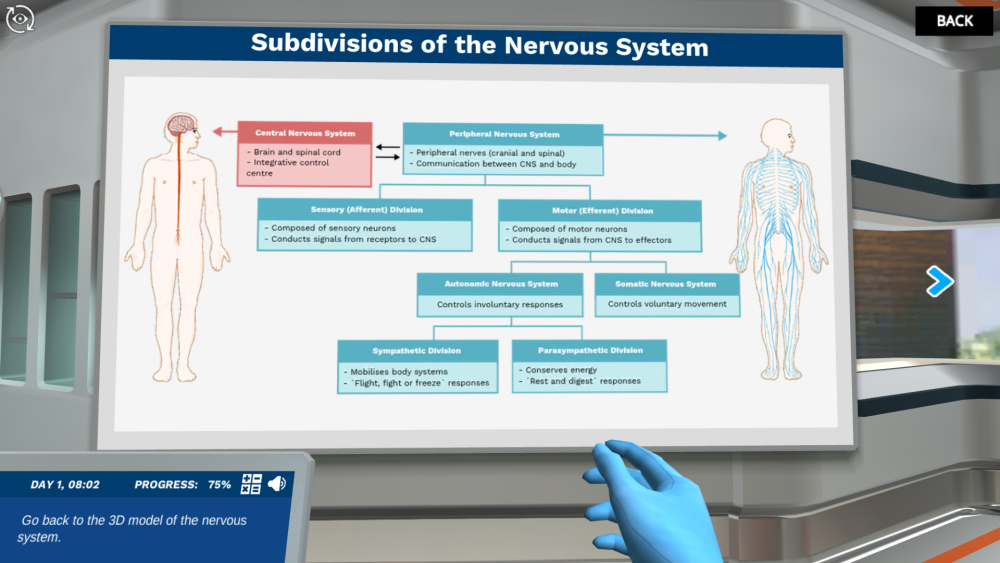 Image from Labster's subdivisions of the nervous system virtual lab.

Why could the subdivision of the nervous system be tricky?

There are many reasons why learning about subdivisions of the nervous system could be overwhelming and tricky. The top three reasons experienced by most students are discussed below:

We study parts of the body's nervous system, making it an abstract topic. The somatic nervous system is a subdivision of the peripheral nervous system that registers sensory information from our surroundings and within the body and provides voluntary control over skeletal muscles. Students won’t be able to visually see the differences between the sympathetic division and the parasympathetic division. Likewise, the brain and spinal cord parts also seem conceptual unless visualized. The abstract nature of this topic makes it tricky for educators as students demand to see the phenomenon with their eyes.

The nervous system is a complicated subject. Intricacies and details make this an even more complicated topic for most students. The brain has a complex structure with different parts, like the midbrain, forebrain, and hindbrain. Each piece is further subdivided into separate parts. The spinal cord is a direct continuation of the brain located within the vertebral canal. We can divide the spinal cord into four different regions: cervical (C), thoracic (T), lumbar (L), and sacral (S). These spinal segments are connected to different parts of your body through 31 pairs of spinal nerves. The spinal nerves emerge between each vertebra.

Some terms used in the nervous system, like hippocampus, thalamus, and hypothalamus, have similar sounds. Students often need help remembering the difference between these terms. The cerebrum is found at the front of the brain, further divided into two parts: the left and right cerebral hemispheres. The cerebellum is located behind the brain beneath the temporal and occipital lobes. It regulates voluntary functions, coordination, and balance.

The diencephalon is composed of the thalamus and hypothalamus. The thalamus helps process sensory data, while the hypothalamus transmits hormonal signals. They are also responsible for a bunch of jobs. Together with the hippocampus and amygdala, they make a limbic system. The hippocampus is primarily involved in memory, while the amygdala helps us decide when danger is approaching by switching on the ‘fight or flight response.

Subdivision of central nervousness can be a manageable topic for students. Use the following strategies to make it a more approachable subject for students.

Students in high school are already familiar with some terms associated with the nervous system. However, there is a chance that most students need to refresh these topics. Delving into the topic without these terms would demotivate students as they won't be able to keep up with the class. Teachers could also ask some general questions to accomplish knowledge objectives. Simple questions to ask about the subdivision of the nervous system are as follows:

The information in books sometimes gets boring for students. An effective way to keep students motivated and interested throughout the lesson is to share exciting facts about the topic. Here are a few things about the nervous system that you could share with your students.

We usually think something is true after seeing it with our eyes. Students also need to be able to visualize a phenomenon before accepting its actual value or even that it exists. Please take advantage of 3D models of the nervous system that would help students realize why the parts are divided the way we learn. Use interactive learning activities like the ones described in the Labster simulation to make learning more effective and effortless. 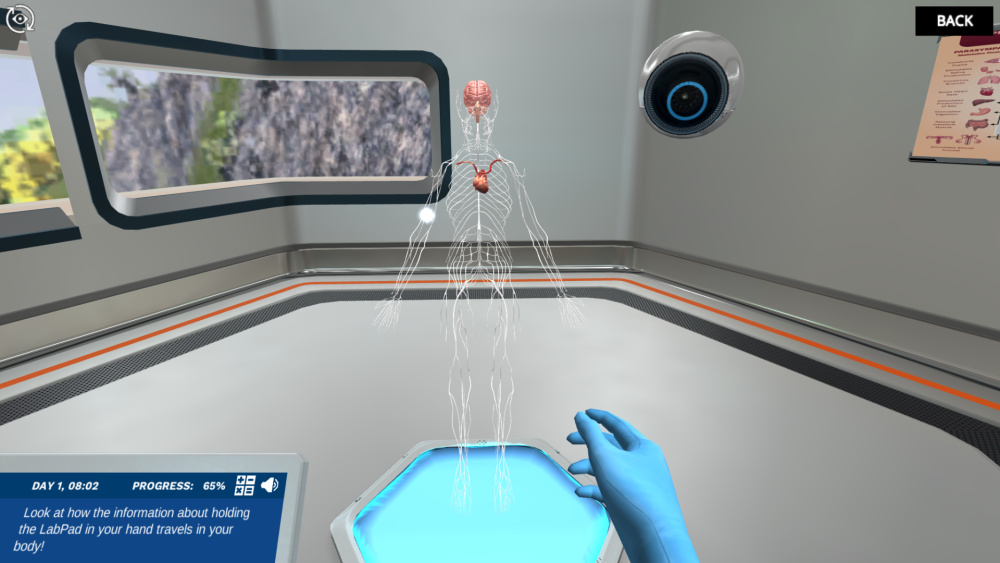 Image from Labster's subdivisions of the nervous system virtual lab.

Learning about parts of the nervous system is a challenging task. Students face many difficulties in exams as they forget details included in relative subdivisions. For instance, it is straightforward to mix up that medulla is the part of the brain stem, not the cerebrum. Wordplay or mnemonics comes in handy when memorizing such topics. Linking a story or playing around with words to make some connection with the real world help students ace exams.

A virtual laboratory simulation is a great way to teach subdivisions of the nervous system. At Labster, we're dedicated to delivering fully interactive advanced laboratory simulations that utilize gamification elements like storytelling and scoring systems inside an immersive and engaging 3D universe.

Please look at the above snippets taken from the Labster simulations or get in touch to find out how you can start using virtual labs with your students.