5 Ways To Get Students Interested in Natural Climate Change Factors

The climate has changed throughout Earth's history and has experienced ice ages and greenhouse periods. Compared to today, the greenhouse season is relatively warm. An ice age is a climatic period with a layer of ice on the earth. Ice ages (colder) and interglacial (warmer) periods occur in ice ages. Different factors are responsible for climate variability at different time scales.

It could be said that the timescale of change is a repetition of events in Earth's history. Adequate representation of these changes is evident in the natural change in climate over time; These catastrophic changes, usually caused by human activities, cause greenhouse gas emissions in landscapes and wetlands around the world. 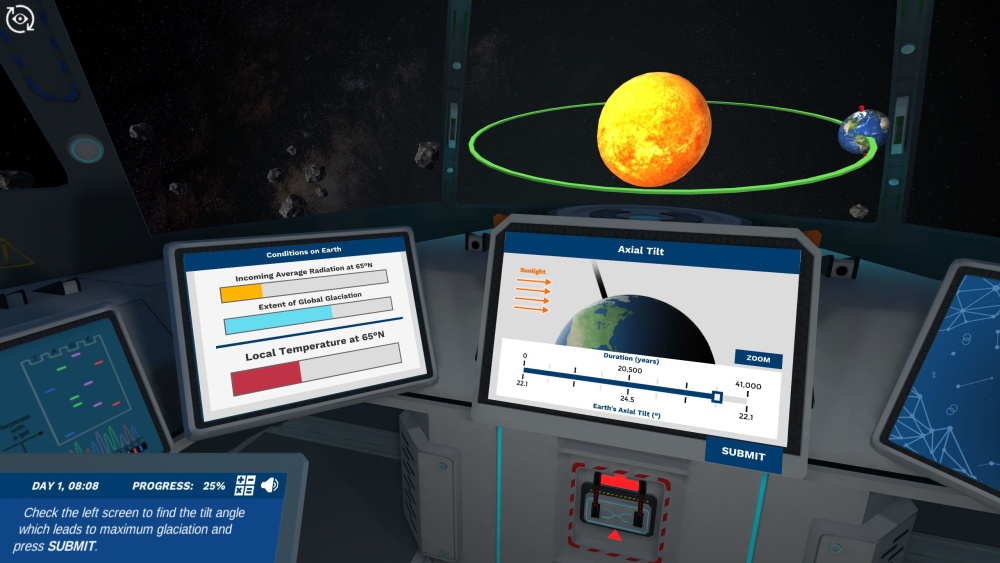 In the past century, we have experienced climate change caused by human activities (anthropogenic emitters) called anthropogenic climate change. Anthropogenic emissions include the burning of fossil fuels, agriculture, and deforestation, which release billions of tons of greenhouse gases into the atmosphere every year. This has caused the earth to warm faster than is believed to be natural in recent decades.

If everything related to timescales of change is so well-known and well-documented, why is the subject such a nightmare for students?

Why don't teachers have the resources to deliver effective lectures on this topic?

What are the main challenges students face when studying how timescales of change are natural drivers of climate change?

To answer all these questions, we have tried to collect some of the resources in this article. As you read, you will be presented with the main problems faced by students studying this subject. We will also provide some practical solutions to solve the problem. Finally, we convince you why virtual labs benefit your students and allow you as an educator to convey concepts more effectively.

Why Timescales Of Change Can Be Difficult To Learn Or Teach

There are 3 main reasons why students are frightened by the topic of timescales of change. Recognizing this problem is the first step in helping students understand this topic.

Many natural and man-made factors affect the timescales of change. Students cannot see or feel them. Not being able to visualize the process and not seeing its relevance to the real world can demoralize learning and make it difficult for students to stay motivated. The second challenge is that natural climate change takes years, which can be difficult for students to follow up.

2. It requires a basic understanding of astronomical climatic factors. 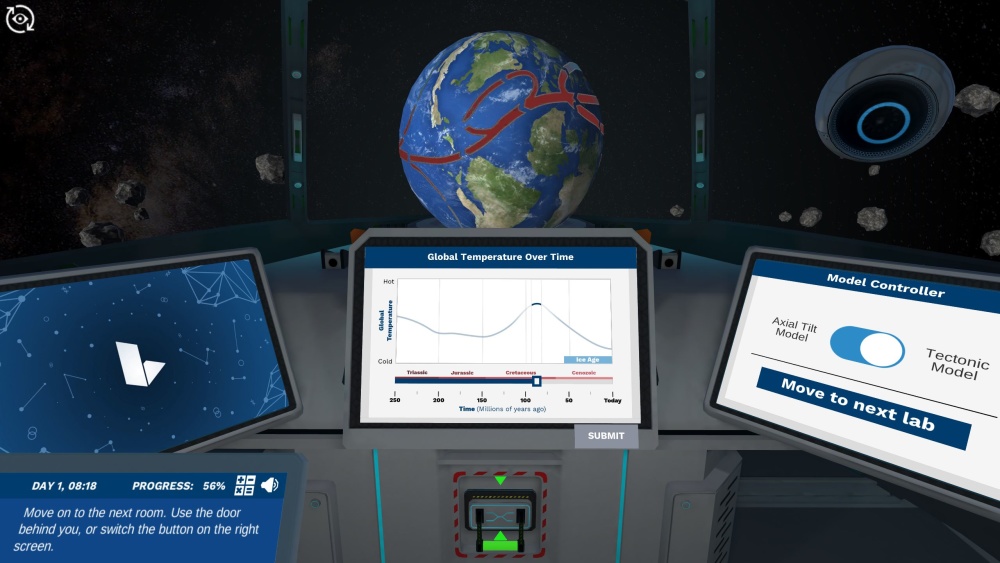 The Milankovitch cycle theory explains long-term cyclical changes in the Earth's orbit, axial tilt, and the direction of the Earth's axis. The Milankovitch cycle also affects Earth's climate. Earth's axis is tilted at an angle as it moves around the Sun. In 41,000 years (one tilt cycle) the angle of this tilt changes. It can vary from 22.1 to 24.5°. Currently, the earth's tilt angle is about 23.4°. The tilt of the earth directly affects how extreme our seasons are. The angle of inclination changes how much incoming solar radiation reaches the polar regions. A smaller tilt angle results in a milder season, allowing larger ice sheets to form.

Eccentricity (orbit shape): It takes the earth 365 days to orbit the sun. However, the shape of the Earth's orbit changes from nearly circular to slightly elliptical. As a result, the distance between the earth and the sun changes over a very long time. The closer the earth is to the sun, the more solar radiation reaches the earth. The cycle of eccentricity lasts for 100,000 years.

3. The topic is too theoretical

Precession (wobble): Earth's axis tilts slightly (or wobbles) as it rotates. It also occurs in a cycle known as precession. It took about 26,000 years to complete. Earthquakes are responsible for the timing of the seasons and the seasonal contrast between the hemispheres. These cyclical changes affect the global climate over tens of thousands of years. 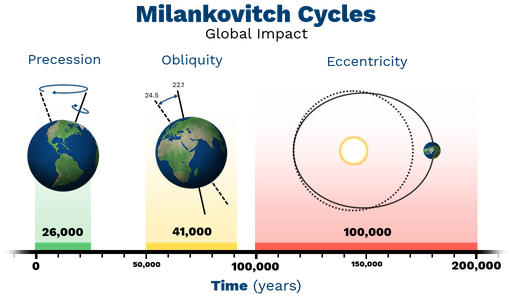 Figure 3: The Milankovitch cycle is the long-term change in Earth's orbit, axial tilt, and direction of Earth’s axis. These cyclic changes influence global climate on timescales of many ten thousand years. Image source

5 Ways To Make Timescales Of Change A More Comprehensible  Topic

To overcome the problems encountered when teaching timescales for change, teachers can use the solutions discussed in this article. They not only make lessons clearer and easier to understand for your students, but also make teaching easier for educators like you

Although scientific discoveries about climate change date back to the 17th century, the 19th century marked the unfolding of these events when the natural greenhouse effect was first discovered. John Fourier (1768-1930) said that the earth would be much colder than the atmosphere. In 1896, Svante Arrhenius calculated the effect of carbon dioxide as an increase in surface temperature by 5-6 degrees Celsius. John Tyndall (1820-1890) and Eunice Newton Foote (1819-1988) independently demonstrated that carbon dioxide and water can store heat in the atmosphere. Roger Revell (1909-1991) pointed out in his journal published in 1957 that the increase in carbon dioxide would be dramatic because the oceans were unable to absorb all of the carbon dioxide released by human industrial fuel emissions. Charles Neeling (1928-2005) published research examining the annual increase in carbon dioxide in the Earth's atmosphere.

2. Connect it to the real world 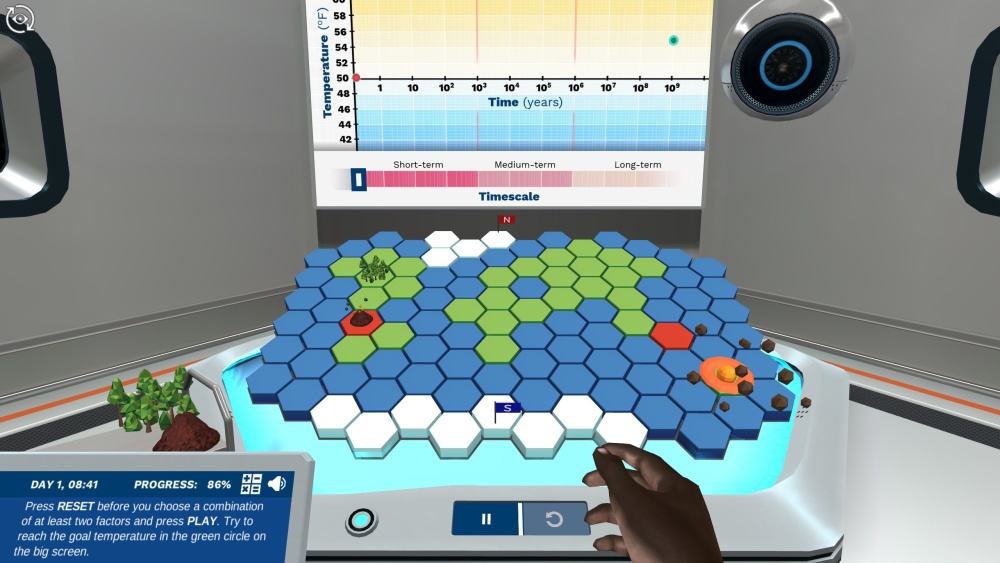 Geological and biological climatic factors: Plate tectonic processes affect climate in a variety of ways. Tectonic activity can change the distribution of continents and affect ocean currents. It is often associated with volcanic activity or mountain building. Because the mountain-building process takes millions of years, its global climate impacts are manifest on a long-term scale. But the mountains also change the local climate in a short time. Just imagine the rain shadow effect of the Andes or the Rockies. The same natural climate change agent can act on different timescales!

Volcanic eruptions release various gases, aerosols, and solid particles (such as ash) into the atmosphere. Although eruptions often last for days or weeks, their effects can last much longer. Ash particles and sulfur aerosols reflect incoming solar radiation and cause global cooling. For example, the 1815 eruption of Mount Tambora caused intense volcanic cooling. The year 1816 is known as the "year without a summer". However, volcanic cooling usually lasts only a few years. Ash particles fall back to the ground within hours to weeks. Aerosols can remain in the atmosphere for up to three or four years. Once these particles stop blocking sunlight, global temperatures will rise back to pre-epidemic levels. Volcanic eruptions also release greenhouse gases such as CO2 and methane. These gases have a warming effect and can remain in the atmosphere for thousands of years. However, the amount of greenhouse gases released by individual volcanic eruptions is negligible compared to anthropogenic sources. The timing of high volcanic activity throughout Earth's history is another matter. It is suspected that large-scale volcanic activity, such as seafloor spreading, may have released large amounts of CO2. Over millions of years, this may have caused global warming, including melting ice sheets and rising sea levels.

Sea ​​wave: The constellations of plate tectonics (the relative positions of continents and straits) have a major impact on global ocean currents, changing the trajectories of major ocean currents. Ocean currents are driven by differences in water temperature and salinity which are closely related to sea level and atmospheric circulation. The ocean is the largest carbon store on earth and regulates the concentration of CO2 in the atmosphere. The oceans also store and transport heat, which can significantly impact the local climate. The Gulf Stream, which warms northern Europe, is an example. The ocean circulation system operates on an intermediate time scale (several decades to tens of thousands of years), so it is much slower than the atmospheric circulation system.

Asteroid impacts cause the same climatic effects as volcanic eruptions. However, these effects can be more intense and short-lived. Dust and aerosols are released into the atmosphere, where they reflect sunlight and cause global cooling. Scientists suspect that an asteroid impact was responsible for the extinction of the dinosaurs. Intensive cooling after impact may last from several months to decades. This cooling period is believed to have been followed by a long and steady period of global warming. Chemical reactions between asteroids and Earth's rocks can release greenhouse gases and cause global warming.

The components of the biosphere (all living organisms) have a measurable impact on the Earth's climate, both locally and globally. Plants use CO2 through photosynthesis. Over the long term, increased plant cover can reduce global CO2 levels in the atmosphere.

Scientists quickly noticed a curious pattern: Because there is more land north of the equator than south of it, vegetation is measurably changing global CO2 levels. During spring and summer in the Northern Hemisphere, photosynthesis reduces global CO2 levels by about 3%. This annual pattern of CO2 levels in our atmosphere is due to seasonal vegetation cycles. 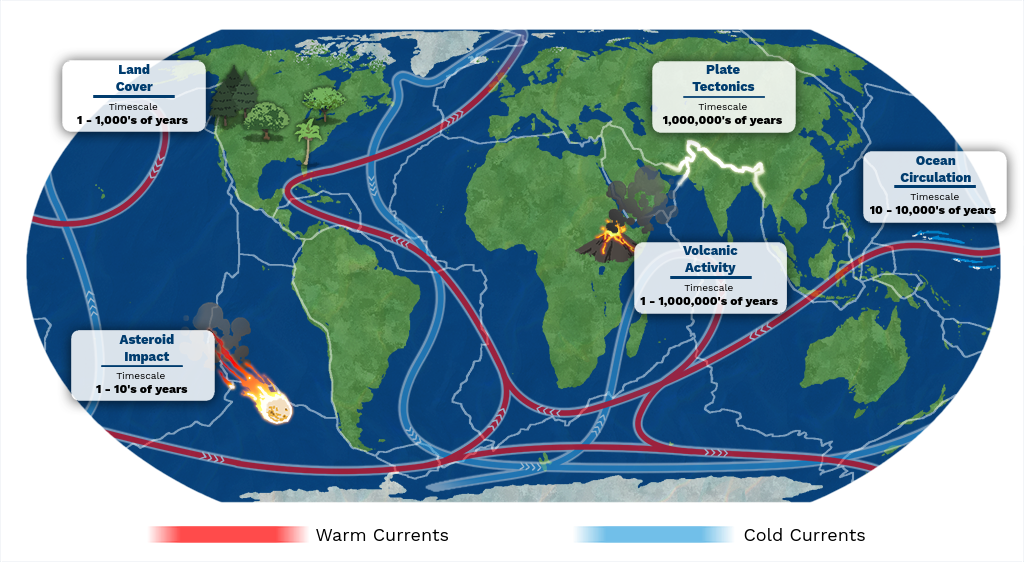 4. A mnemonic can be valuable

Memory aids can be very helpful in understanding complex topics such as timescales of change and can be used in recalling chemical names. It is a requirement that students know some of the main chemicals behind greenhouse gases and global warming. This mnemonic facilitates the learning process. "MoNoHyPerC2-Sul", note that the order of these formulas is not in any particular form.

5. Train them to use virtual lab simulation

A unique way to teach the timescale of change is through a virtual laboratory simulation which challenges theoretical teaching concepts. At Labster, we have a solution for you. You can use Labster's timescales of change simulation to help fill gaps in available learning resources and address the lack of visually appealing video and graphics capabilities in education.

We offer interactive 3D mini-games where your students can virtually learn how astronomical, geological, and biological factors caused climate change in Earth's history. The geological record shows that natural climate variability has occurred in the short, medium, and long term. Studying Earth's past climate is essential to understanding current global warming.

Learn more about Labster's timescales of change simulation here, or contact us to find out how you can start using the virtual lab with your students.