A method for the separation of various compounds that is predicated on the physical properties of those compounds is known as liquid-liquid extraction. A solute of interest is transferred from one liquid phase into some other immiscible liquid phase, where it can be shown to have a higher degree of solubility. The extraction process is normally carried out with a separatory funnel, and the two immiscible liquid components are usually water (referred to as the aqueous phase) as well as an organic solvent (referred to as the organic phase) (figure).

The idea of relative solubility underpins the process of liquid-liquid extraction, which employs this approach. Depending on the degree to which the solute dissolves in each of the two immiscible solvents, the solute will disperse itself in a certain and predicable ratio between the two solvents. It is essential to make certain that the solute is more solubility in the solvent system than it is in the other solvent. This will allow the solute to predominantly partition into the extraction solvent. The ratio of the concentrations of a solute in two immiscible solvents at equilibrium can be thought of as the partition coefficient (P), and it can be used to calculate the relative solubility of a solute in two different immiscible solvents. 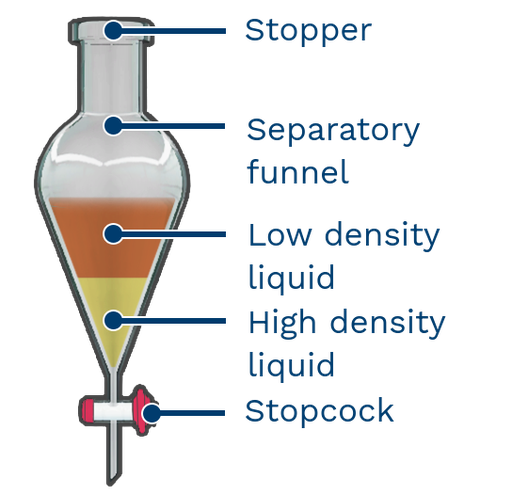 Instructions for utilizing a separatory funnel:

To fill, remove the stopper from the separating funnel and replace it with another funnel. Be sure to position the funnel to cover a beaker or flask, and then secure the stopcock. After that, pour in both of the stages, after which you should take out the funnel and put the cap back on.

Mixing is necessary if the objective is to change the phase of a substance, and this can only be accomplished through shaking. When the two phases are contained within the funnel, giving it a light shake will temporarily cause the phases to "mix," increasing the surface area between them. This will allow the substance of interest to move as easily and quickly as possible from one phase to the other. When doing so, a tiny gaseous pressure can develop; therefore, the funnel needs to be evacuated to prevent the pressure from becoming a mess.

It is essential to guarantee that a buildup of gases does not occur in a separatory funnel by venting the funnel. This will prevent an inadvertent push out of the stopper or liquid. While maintaining your grip on the stopper, carefully rotate the separatory funnel so that the pointed end faces upward and away from any persons or vital laboratory equipment. After that, proceed to activate the stopcock so that any gas that may be present in the separatory funnel can gently escape. Carry on shaking and opening the vents until there is no longer any sound that can be heard.

Stopcock: the stopcock is a tiny valve structure that is located at the bottom of the separatory funnel. Its purpose is to allow gas to escape and to slowly discharge one phase at a time into a new container.

Stopper: the stopper's purpose is to prevent any splashing from occurring and to prohibit liquid from escaping the separatory funnel when the funnel is maintained in an inverted position.

Caffeine is a psychoactive substance that is consumed most frequently all around the world. It is a pharmacologically active chemical that, at certain doses, has the potential to exert a moderate stimulating effect on the central nervous system. Caffeine is consumed on a daily basis by around 80 percent of the world's total population. After being cleaned, the caffeine is subjected to either an iodometric back titration procedure or a high-performance liquid chromatography examination. Caffeine is one of the medications that has received the most research attention because of the grave concerns regarding the possibility that it could be used for pathogenic consequences.

Why  Liquid-liquid Extraction is difficult for students?

Because this subject is connected to pure chemistry and is a component of a subfield of extraction, it may be challenging for someone who is just starting out to comprehend it in its entirety. The fundamental ideas of solute, solvent, buffer, and solution could leave the pupils scratching their heads. Additionally, the part of the technique that analyses the data at the end includes graph representation, which comes from the knowledge of statistics. As a result, learning statistics can be quite challenging for pupils.

As was just mentioned, it is necessary to have a fundamental understanding of chromatography's process before moving on to the extraction step. because the method of extraction involved a series of procedures as well as a set of guidelines to follow in order to get things done correctly. The extraction process is expensive, and even the smallest amount of carelessness can result in the loss of the experiment and the resources.

3) An approach based on the theory

In most cases, theoretical learning with the assistance of diagrams is used to cover the subject of chromatography, its various varieties, and the underlying principle. Using a flow chart, it may help pupils form an image in their heads of what is going on. However, kids have difficulty understanding each phase's relevance in the process. This is necessary to have that level of comprehension. It is vital to keep in mind that the answer to this problem does not lie in determining the underlying mechanism of each subject, which once would be done in a theoretical environment.

This exercise aims to get you thinking about solutions and mixtures and solvents and buffers and saturation and concentration. A learner needs to be able to recognize the distinctions between these two ideas. Providing examples drawn from regular life is one way to accomplish this goal. The students are given an outline of the properties that distinguish mixtures and solutions from one another and how those qualities work. During a demonstration that will be given by the teachers in the classroom, the students will have the opportunity to try and compare the physical aspects of a few simple mixtures and solutions.

After that, it is suggested that the pupils try their hand at some extraction experiments. These "hands-on" exercises are advantageous to the growth of students' practical capabilities and help in the formulation of their grasp of scientific ideas and occurrences. Students can benefit from developing their practical abilities by participating in these exercises. Participating in practical training, in particular, the process of learning extraction has several advantages, one of which is the development of knowledge regarding danger, risk, and safe functioning. This is a direct effect of participation in practical training.

3) Discussing the problem during

The formation of emulsions by some chemicals, a bothersome habit, is a typical issue with extractions that is not caused by the pour method. These typically form between the two layers and are chemically made up of the two solvents as well as other substances present in the initial solution. The emulsion may self-resolve in a short period of time or may be highly persistent. In the latter situation, draining the emulsion out during the phase that doesn't contain the product and again extracting it can occasionally be a good method.

In order to collect data and evaluate chemical compounds more effectively and manage information flow more efficiently, statistical approaches are used in the field of chemical research. They enable the physiochemical characteristics of the chemically constituted substances to be predicted. They aid in obtaining more conclusive scientific findings and in making better use of the available resources. Since the majority of the students will have a scientific background, statistical mentoring of students is necessary for this aim.

As liquid-liquid extraction is a complex topic. So the better way to learn extraction is through virtual lab simulation. Here at Labster, students investigate the extraction machine by looking inside it. The gamification option provides an advantage to students and teachers to control the conditions and separate the caffeine from its aqueous phase into an organic phase and then dry it for a tiny amount of dried caffeine powder

Check out the Liquid-liquid Extraction: Extract caffeine from your everyday drinks Virtual Lab.