5 Ways to Get Students Energized about the Periodic Table

The elements are the fundamental components of all matter. Their atoms weave together to make everything in the cosmos, including ourselves-the air we breathe, the food we eat, the animals that share our environment, and every bit of mass found in our universe.

The data about all elements (either found in nature or synthesized in laboratories) is collected in the form of an iconic Periodic Table. The elements are arranged in increasing atomic numbers in the form of rows and columns. The rows of elements are termed periods while the columns are called groups.  The arrangement is made such that the element's properties repeat after regular intervals, and elements in a group share the same chemical properties.

For chemists and researchers, the Periodic Table is extremely helpful. Based on their position, they can get an idea of how atoms will react to build molecules and connect components with similar chemical properties.  Chemists can synthesize novel molecules more easily once they have a better understanding of such interactions.  Even better, it allows them to foretell the properties of newly formed compounds.

Since the periodic table holds such sacred value in chemistry, you will have to teach it to students in the introductory course.

Students usually find it challenging to understand and memorize. However, that doesn’t have to be that way. Read on to learn five ways to grab your students’ attention and get them energized about the Periodic Table.

Why are Groups of Periodic Table tricky to remember?

Here are three reasons why students find groups of a periodic table hard to remember:

The periodic table consists of 18 groups with a total of 118 elements. When students first look at the table, they may think that they need to memorize the whole table. But necessarily, they don’t need to do it. However, they should be familiar with the main 8 groups and their elements. Even memorizing those 30 to 40 elements is tough for students.

The concept of an element is abstract. The size of atoms of an element is so small that even a full stop contains 10 million atoms. Moreover, you cannot show what an element looks like since it’s a microscopic quantity.

In textbooks, the atoms of an element are shown by the nucleus and some circular rings (orbits) with electrons. These diagrams though distinguish between the two elements, but don’t intrigue students to learn.

The periodic table contains only the symbol of elements.  The symbols of most elements do start with their names, however, in some cases, the symbols are based on their Latin words. For instance, Iron is abbreviated as Fe, which is based on its Latin name Ferrum.

Each group of elements shares properties that are different from the others. So, for a student who has just started studying chemistry, it is natural that he feels the periodic table is complex and hard.

Though students find the Periodic Table hard to learn, you can make it fun by adopting the following five ways.

Story-telling is a handy tool when teaching an abstract chemistry course. Stories are proven to be quite effective in grabbing the attention of students. For instance, in this case, you can tell the history of how the periodic table was made.

The table may be hard to learn but its history is exciting. The periodic table we use today, the one mentioned in your textbook, is the modern form of the Periodic Table. It hasn’t always been the same since its inception.  It took the combined efforts of several scientists spanning over a century to put all of these elements together.

The first effort was made in 1789 by Antoine Lavoisier. He classified the elements as metal and non-metals, however, he didn’t arrange them in order. Forty years later, Johann Döbereiner, observed that a group of elements shared some properties. He created groups of three elements that shared the same chemical and physical properties in the order of increasing atomic masses. It was known as the law of triads. The interesting fact about the middle element was that its atomic mass was the average of the other two elements in the group.  An example of a triad group is Chlorine, Bromine, and Iodine.

Still, a rough periodic table wasn’t formed. In 1865, John Newlands, a British chemist, was the first one to arrange elements in the form of the periodic table. He arranged all the available elements based on their increasing atomic masses. He observed that every eighth element had similar chemical properties to the first one. The period table could not move further since no space was left for undiscovered elements.

So very soon in 1869, a Russian chemist, Dmitri Mendeleev announced a periodic table in the order of increasing atomic masses. It was different from the previous one since Mendeleev left spaces for the undiscovered elements.

Even though Mendeleev’s table formed the basis of the Modern Periodic Table, it had some defects. The position of hydrogen was undefined. The position of isotopes wasn’t correct; Mendeleev believed that since they differ in atomic masses they should be written separately. Moreover, it was later realized that atomic mass cannot be used as a parameter for arrangement since some elements do share the same atomic masses.

In 1913, Henry Mosley introduced the atomic number of elements through his X-ray study. He passed X-rays to the element and noted down the wavelength of elements, which he then converted into atomic numbers. After he assigned the atomic numbers to all elements, he arranged them and constructed the modern periodic table, in the form of rows and columns. The rows are called periods while the columns are groups. The periodic table illustrated in your book is the one Mosely proposed.

Apart from the tale of how it was discovered, you can tell them interesting facts about the elements in the periodic table. Some of the facts that may surprise your students are listed below:

3. Tell Them the Significance of Periodic Table

If you don’t tell students about the actual use of a particular topic, they are not motivated to learn about it.  In this case, you have a lot to tell about the significance of the periodic table.

The periodic table is a brief encyclopedia of elements. The table tells you pretty much everything about the element, what is its size, how it reacts, its physical state, etc.

As a student, you can find out the atomic masses and atomic numbers of elements using this table. Both these characteristics are extremely important because they directly correspond to elements’ physical and chemical properties. Moreover, you can just find out whether an element is a metal, or non-metal, using the periodic table.

Teachers usually want their students to memorize some of the elements of the periodic table; however, students can’t cram each element by name. So, you can ask them to create a song, phrase, or mnemonic surrounding the element names.

Noble Gases - He Never Argued; Kevin Xeroxed Ronaldo - He, Ne, Ar, Kr, Xe, RnAnother idea is to give students a task to come up with some interesting song or phrase. You will be surprised to see that students will come up with some amusing phrases. However, they’ll during the process.

In addition to the ways listed above, virtual simulations are also of great help when teaching chemistry. Students usually take more interest in visual and animated content.

You can use Labster’s virtual lab simulation in this regard. Our simulations help students learn and explore theories in a 3D world. For instance, in our Periodic Table Simulation, the periodic table in the lab breaks down and some of its elements get scattered. Students are tasked to identify the elements, based on their properties, and put them back in their respective places. Isn't that a fun way to explore the periodic table? 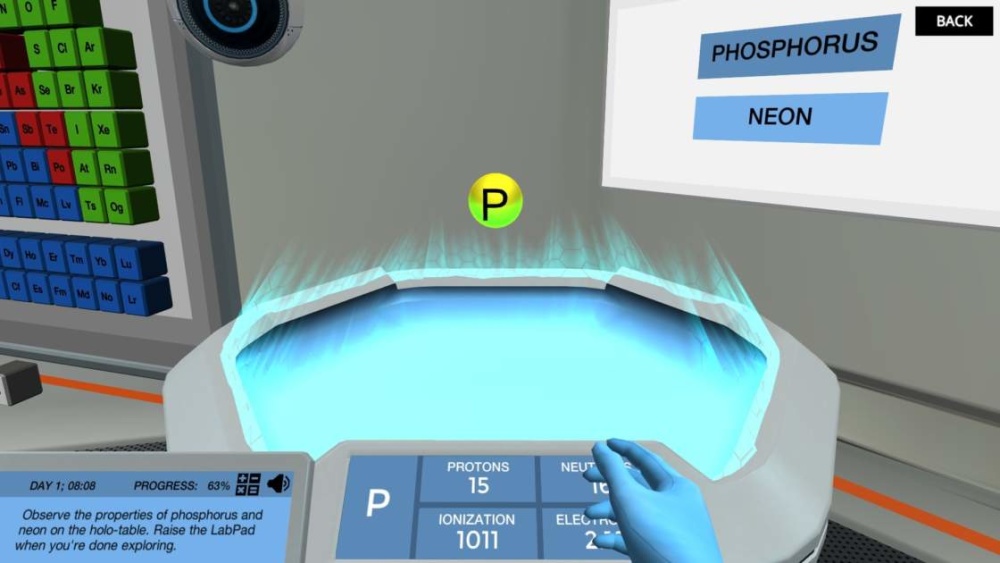 Have any questions, or want to learn about our Virtual Lab simulations, contact us now.