Experimental design: Learn how to solve problems like a real scientist

Being a scientist is a little like being a detective. Scientists look at a problem or a dilemma, and then collect evidence to form a conclusion. Our society relies on scientists to be correct in their conclusions. For example, every year scientists develop a new flu shot to protect us from getting sick. To do this, they have to perform experiments to figure out which strains of the influenza virus are most likely to affect the population that year. Once they have collected enough experimental evidence, they create a flu shot that will provide the most effective protection from those strains. We count on those scientists to form the correct conclusion and develop the right flu shot to protect us all from sickness. But how do they make sure that the answers they find are correct?

This is where experimental design comes into the picture.

What is experimental design?

Experimental design is all about planning experiments in order to ensure that the results are objective and valid. Since experiments are a fundamental part of scientific discovery, it’s absolutely essential that we design them well. A poorly designed experiment will not provide any evidence to support a particular conclusion, and might even point toward an incorrect conclusion.

Take a look at the graph below, published by the New England Journal of Medicine, which compares the number of Nobel Prizes won to annual chocolate consumption per capita in 20 countries. 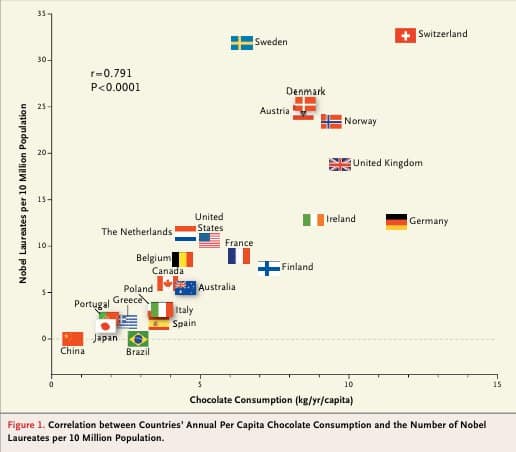 However, the graph fails to take into account other factors that might affect winning a Nobel Prize, such as education standards in each country, or the available research funding. This is a classic example of mistaking correlation for causation. A well-designed experiment would account for those other factors, using positive and negative controls to measure whether chocolate actually influences the likelihood of winning a Nobel Prize.

How do you plan an effective experiment?

All scientific research starts with a question that you want to answer. For example, does eating chocolate increase intelligence?

A hypothesis could be something like: Eating two ounces of chocolate per day increases IQ.

The experimental model is the technique and sample you use to test your hypothesis. In other words, what tests you’ll perform, and what test subjects you’ll use. Some experiments use plates of cells, some use mice, some use computer programs, and others use humans. It all depends on what you’re testing!

There are many experimental models, and you should try to choose the most effective one for your experiment.

Look at the resulting data and analyze it. Does your data support your hypothesis, or not?

Once you have carried out your experiment with controls, you will have an idea of whether or not your hypothesis is correct – but that still isn’t proof! We can only make conclusions if the experiment is reproducible and the results are consistent over several replications. Once you have performed the experiment several times and observed similar results, then you can analyze the data and start to draw conclusions.

The best way to learn how to design a scientific experiment is to try it yourself. In the Experimental Design simulation, you will step into the shoes of a pharmaceutical detective for a day. Your task is to design and carry out an effective experiment to find out if a new drug is causing damage to kidney cells.

Here’s a brief overview of the topics you’ll cover in the simulation below.

Humans have always strived to explain natural phenomena. In the first mission of the experimental design simulation, you will do just that. The scientific method gives you a practical template for forming and testing conclusions. Using it, you can investigate phenomena, acquire new knowledge, or correct and integrate existing knowledge surrounding your experiment.

In your next mission, you have the freedom to design your own experiment from scratch while examining human kidney cells under a microscope. Every tool you need to design and perform your experiment is available in this virtual lab.

Are you ready to set up your own experiment and test the side effects of a suspicious new drug? Click the button below!