Do you know about the most powerful energy source on Earth; a source that could cause a huge explosion? Well, that source is nuclear energy from a fission reaction.

In simple terms, fission is a reaction in which an unstable nucleus splits into two daughter nuclei with the release of an immense amount of energy. Fission can be induced or spontaneous; the latter is quite rare. In induced fission, a neutron hits the radioactive atom, for instance, uranium 235, and disintegrates it into two daughter nuclei.

It is a chain reaction. That means when the uranium-235 atom is hit by a neutron, it disintegrates into barium, krypton, three neutrons, and 200 mega electron volts of energy. Each of the neutrons formed reacts with a new uranium atom and further forms three neutrons. In this way, the reaction continues to progress in a chain until the neutrons are removed.

Nuclear fission is the basis of nuclear physics and it is one of the major power sources in the world. Hence, it is an important topic for high school students.

If you are having a hard time teaching it to your students, Then, read through this article to find out five ways through which you can make fission more interesting for students.

3 Reasons Why Nuclear Fission can be Tricky for Students

Explaining chemical reactions can be tricky since they are abstract. Fission occurs on an atomic scale; you cannot show how a microscopic neutron reacts with an atom and how it splits. The only resource they have is a chemical equation to explain the substances involved in the process. This description is not enough for them to visualize. Therefore, they find it hard to learn.

2. The chemical Equations are Complex

Nuclear fission is a chemical process and it accompanies some chemical equations. Though these equations help us learn about the whole process, students have a hard time understanding them. For students, memorizing the atomic masses and atomic numbers of reactants and products, then putting them together in a chemical reaction, is a tough job.

3. Experimentation is not possible

Most of the time, physics laws and theories are explained through experiments in the lab. However, that’s completely impossible in this case. The reaction is so vigorous and destructive that even scientists have to work on it in controlled labs set up in far-flung areas. The lack of experiments to support this concept is another reason it is tricky for students.

Keeping in view the problems faced by students, here are five ways to make nuclear fission an approachable topic.

1. Tell Them Tales of the Scientist behind it

One of the techniques to make your lectures interesting is story-telling. Whenever you think that the topic is hard and complex, students will not take an interest in it. Then, to engage them, you can start with the story of the people who invented the phenomenon. The tale can revolve around the lives of scientists who discovered it or how they got to it.

In this case, the story revolves mainly around two scientists, Lise Meitner and Otto Frisch. In 938, over their Christmas break, these two scientists made a shocking discovery that transformed nuclear physics and paved the way for the atomic bomb.  When figuring out the question raised by a fellow nuclear chemist, Otto Hahn, they found something that was previously considered impossible, i.e. the splitting of an atom into two smaller atoms.

Lise Meitner was born in Vienna. At that time, women did not receive much schooling, so there were few work opportunities. She had no other option than to become a teacher. However, a few years later, she moved to Berlin in search of better opportunities. She was a shy girl, but she quickly grew close to scientist Otto Hahn and began working with him. Meitner volunteered to serve in the Austrian army as an X-ray technician during World War I. She went back to Berlin after the war was over and was appointed the director of a physics department where she conducted nuclear physics research.

When neutrons were discovered in 1932, scientists thought they could be used as a diagnostic tool to study atomic nuclei. A few years later, Enrico Fermi produced an element heavier than uranium by bombarding neutrons into uranium.  Most scientists believed that striking a big nucleus like uranium with a neutron would only cause minor changes in the number of neutrons or protons. However, Ida Noddack, a scientist, argued that Fermi had not ruled out the idea that the uranium may have truly fragmented into lighter elements. But she made no theoretical arguments to support this.  Since no one, even she herself, did not follow it, the notion was ignored.

Following this work, Meitner, Hahn, and another chemist, Fritz Strassmann, started bombarding the uranium atoms with neutrons. Initially, they didn’t get the breakthrough.

Meitner who had Jewish had to leave the country due to Nazis. However, she remained in contact with the two chemists, who then wrote her a letter in 1938 when they discovered barium in the products of neutron bombardment.

Meitner looking for the answer to that letter, when her nephew, Otto Frisch, visited her during the holidays. He was a physicist working at Neil Bohr’s institute. She showed him the letter. Although they agreed that Hahn was a great chemist, the results he sent were confusing.  To discuss the situation, they took a stroll in the snow. Frisch with his drawing showed the uranium splitting was like a water drop. It would get stretched after being struck by a neutron, then begin to squeeze in the center, and eventually split into two drops. Frisch and Meitner calculated that after the break, the two drops will be forced apart by electric repulsion at high energy. Then the question was, how much energy would be released?

Meitner calculated that the combined mass of the two offspring nuclei would be roughly one-fifth of the original mass. The energy according to Einstein's equation was 200 MeV.

Frisch named it binary fission since a nucleus got split into two, and they two published it in the research paper.

Furthermore, when scientists dug deeper, they found that fission is a chain reaction that continues to progress due to the formation of neutrons. They developed an atomic bomb using this reaction. Meitner was saddened to learn that her work was being used to develop destructive weapons. However, she continued her research in nuclear physics.

2. Explain the Balancing of Chemical Equations

Nuclear fission involves chemical equations that can be troublesome for students to comprehend. So, give them a thorough brief on the reactants and products involved.

The second thing you need to teach them is the balancing of chemical equations. If they learn the balancing, it becomes quite easy for them to remember the reaction and rewrite it in exams.

Similarly, the sum of atomic numbers on the left is 92, and on the right, it’s again 36 + 56 = 92. So, that shows the reaction contains equal quantities on both sides and is balanced.

Since the fission reaction is an atomic-level reaction, it cannot be seen with the naked eye how atoms disintegrate and release neutrons. This makes the content abstract and hard for students to comprehend. 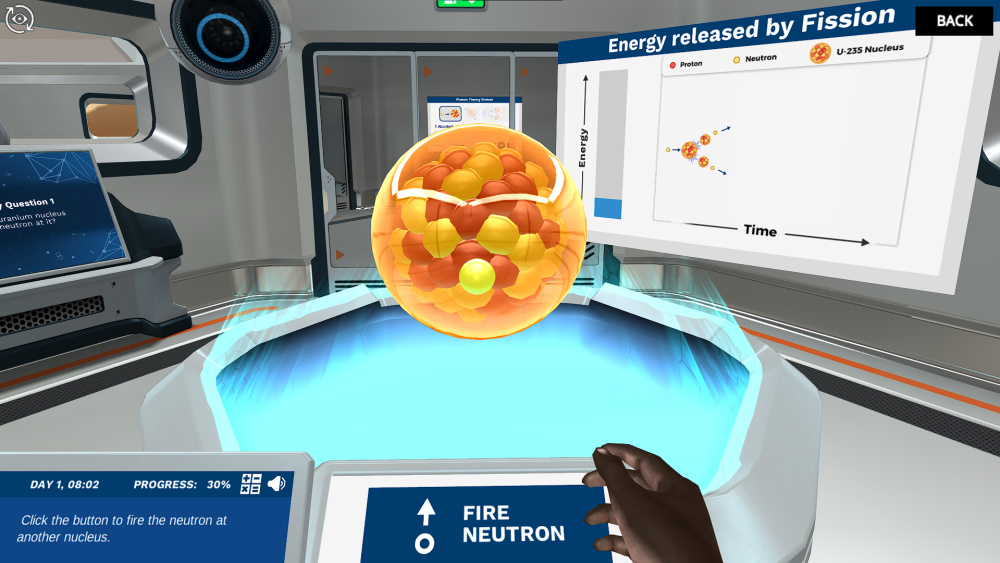 Figure from Labster showing the chain reaction of Nuclear Fission

However, you can make the subject matter attractive and interesting by using colorful animations. Students, rather than studying just the chemical equations, when get to see how atoms react, which creates more impact. Seeing the animations shows them a clear picture of what’s happening in the reaction.

Whenever you teach anything new to students, they are actually interested in knowing its bigger purpose. They often ask themselves, "Why am I am studying this?" “Is it used somewhere?  What are its applications?”

As an educator, it’s your job to make sure you are making students aware of the real-life applications. For instance, in this case, you need to cite the applications of nuclear fission.

One of the prime uses of nuclear energy is for the generation of electricity. As mentioned earlier, when a radioactive element such as uranium splits into two smaller elements, a huge amount of energy is released. This energy can be used to heat water and form steam. The steam can turn turbines and generate electricity.

However, the nuclear fission reaction takes place in a fully secured environment for three main reasons.  First, radioactive elements are involved in this reaction. Their exposure to humans is extremely harmful.  Second, since it’s a chain reaction; it will continue to progress indefinitely. For this purpose, control rods that absorb neutrons are used. Third, the by-products are also radioactive elements that need to be contained.

You may not skip this application since it was one of the primary applications for which nuclear fission reactions were used initially.

As the nuclear fission reaction takes place in a fully secured environment, even researchers have to visit the specifically designed facilities for that. There is no way you can design an experiment related to nuclear fission in your school lab. However, with modern technology, you can simulate this experiment. The whole process in which an atom splits and then continues to react further can be easily explained using simulations.

You can use Lasbter’s Virtual Lab simulations. These simulations are unique because the whole process is explained in the form of a story that is set up in the virtual world. For instance, in our nuclear fission simulation, students are on a mission to find sustainable energy sources. They visit an abandoned nuclear reactor and make it functional by learning the science of nuclear fission.

Do you have any other questions or are you interested in getting these simulations for your students? Contact Us now; our experts are here to help.