5 Ways To Get Students Excited About Endocrinology

Endocrinology is the branch of biology and medicine that studies the normal production and function of hormones and their disorders. Hormones are very important for our daily survival. They control our temperature, sleep, mood, stress, growth, and more.

Hormones are found in all organisms with more than one cell, namely in plants and animals. They affect or control various physiological activities such as growth, development, puberty, alertness, regulation of sugar and appetite, bone growth, and so on. It has also been found that a defect in a hormone or its distribution channel contributes to some of humanity's greatest ills; e.g. diabetes, pituitary disease, obesity, bone problems, some sexual problems, some neurological problems, thyroid disease, altered appetite, and cancer.

What makes embryology learning and teaching a challenge? Read this article for five suggestions to improve outcomes and also benefit from using a virtual lab.

Why can endocrinology be difficult?

There are three reasons in particular why endocrinology can be tough for even the brightest of students.

We teach students about hormones and how these hormones circulate in the human body. However, they cannot see it because the process occurs at the cellular level in our body. It is impossible to see this interaction with the physical eye when looking at a blood sample and this can be imaginary for students.

Rabbits are inexpensive and easy to handle compared to other primates in research facilities. The development of new vaginal products, such as microbicides and contraceptives, requires in vivo testing for their effect on fertility. Rabbits fertilize vaginally, in contrast to smaller laboratory animals such as mice and rats, which fertilize in the womb, and are therefore valuable as animal models for testing vaginal agents for contraceptive efficacy. The rabbit test, or Friedman test, is an early pregnancy test developed in 1931 by Maurice Friedman and Maxwell Edward Lapham of the University of Pennsylvania. 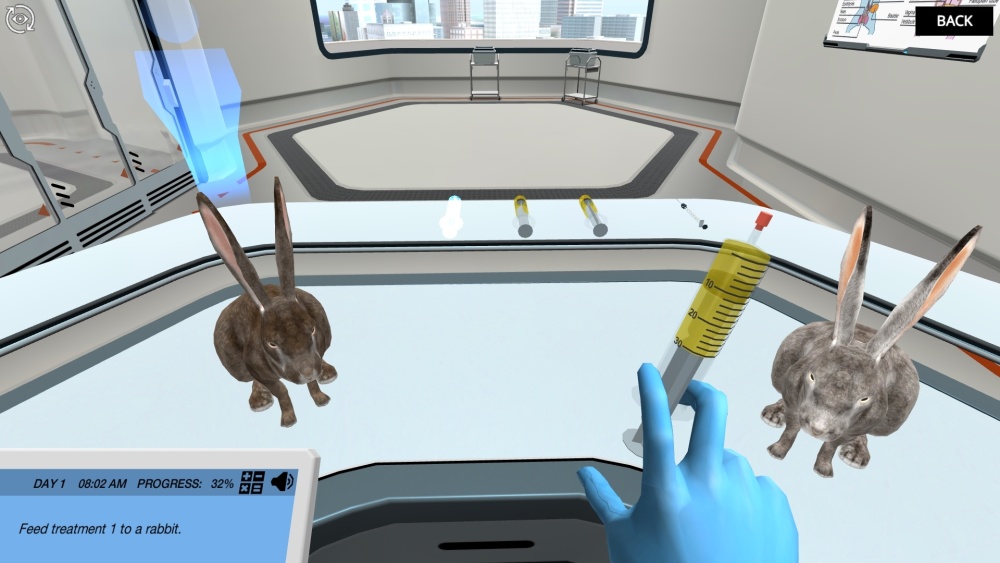 The hormone human chorionic gonadotropin (hCG) is produced during pregnancy and can be found in the urine and blood of pregnant women; this indicates the presence of a fertilized egg being implanted. An earlier test known as the AZ test was developed by Selmar Aschheim and Bernhard Zondek. When urine from a woman is injected into immature female mice in the early months of pregnancy, their ovaries enlarge and show follicular maturation. With an error rate of less than 2%, the test is considered reliable. The Friedman and Lapham tests are essentially identical, but mice are replaced with rabbits. A few days after the injection, the animal was dissected and the size of the ovaries was checked.

The rabbit test has become a widely used bioassay (animal test) for pregnancy tests. The term "rabbit test" was first recorded in 1949 and is the origin of the common euphemism " dead rabbit" for a positive pregnancy test. The phrase is based on a common misconception about tests. While many people assume that the injected rabbit will only die if the woman becomes pregnant, in reality, all the rabbits used for the test die because they have to be surgically dissected to examine the ovaries.

The rabbit test is not only cruel, but it is also bad science. It took 48 hours and was expensive and inaccurate. Sometimes more animals lose their lives if the test is inconclusive.

For this reason, ancient animal testing has been replaced by in vitro tests such as those used in modern home pregnancy tests (first developed in the late 1940s). This test identifies the same hormone, hCG, but with a simple chemical that changes color in the presence of hCG. This easy test can be done in minutes at home with an over-the-counter kit that costs only a few dollars — and uses no animals.

The hormone levels are tightly regulated by the human body through various mechanisms to ensure proper balance. An important mechanism is the use of feedback loops in which hormones, such as estrogen, provide feedback to control their production. This can be positive or negative feedback.

In negative feedback, a stimulus such as a hormone or a neurotransmitter causes the release of a product such as an estrogen. When the product reaches a certain level in the bloodstream, it signals the hypothalamus and anterior pituitary gland to stop the further release of stimulating hormones or neurotransmitters, resulting in a decrease in production levels. For example, testosterone, progesterone, and estrogen affect the hypothalamic and anterior pituitary production of Gonadotropin-Releasing Hormone (GnRH), Follicle Stimulating Hormone (FSH), and luteinizing hormone (LH) in a negative feedback loop to reduce their production, whereas a positive feedback loop is reverse of this scenario. An insufficient hormone level signals the production of a more stimulating hormone or neurotransmitter, resulting in a steady increase in the product.

Some of the hormones that work in this way are highlighted in orange in figure 2 and figure 3 below.

Now that you have an adequate footing, let's go over five paths that can make embryology lessons more fascinating, easier, and pleasurable for you and your students.

In the 17th and 18th centuries, the practice of castration was probably the first history of endocrinology. People are castrated before puberty (the testicles are removed) to maintain a clear, strong voice and to improve breath control. This practice ended in the 20th century when people realized that it had many adverse side effects such as hair loss and longer arms and legs.

Earlier in 1889, Brown-Sécard, a French physician, injected himself with a preparation consisting of blood from testicular veins, semen, and extracts from the testes of dogs, guinea pigs, or rabbits and reported significant improvements in strength, endurance, and concentration. He was probably the first to come up with the idea of ​​endocrine replacement therapy.

The first endocrine therapy was then attempted in 1889 by Charles Brown-Séquard, who used extracts from animal testes to treat aging men; this started a style in "organotherapy" which soon faded but gave rise to adrenal and thyroid extracts, which are the precursors to modern cortisone and thyroid hormones. The first hormone refined is secretin, which is produced by the small intestine to trigger the release of pancreatic juice; it was discovered in 1902 by Ernest Starling and William Bayliss. Starling applied the term "hormone" to these chemicals in 1905, proposing the chemical regulation of physiological processes acting in conjunction with neural regulation; This was the beginning of the field of endocrinology.

Hormones in the body responsible for fertility are:

The control group aims to ensure that the given results are not caused by unwanted parts of the experiment. When selecting controls for an experiment, the control should examine aspects of the experiment design that could inadvertently affect the results, e.g. Method of administering medication.

Anatomy of the Female Reproductive System:

The entire female external genitalia is called the vulva. These include the labia majora, labia minora, and clitoris.

The vagina connects the vulva to the uterus and serves both as a reservoir for sperm during sexual intercourse and as an outlet for the baby during delivery. The urethra ends with a separate opening. The cervix emerges from above the vagina. The uterine wall contains a thick layer of smooth muscle called the myometrium, which serves to expel the fetus during labor. The inner lining of the uterus, the endometrium, proliferates in preparation for the implantation of the zygote and is then shed during each menstrual cycle. Two fallopian tubes, one on each side, connect the uterus to the ovaries. This is where fertilization usually occurs. Tightly attached to the end of each fallopian tube is the walnut-sized ovary, the female gonad.

Egg production occurs in the ovaries: In women, each phase lasts for a certain period. At the beginning of the 5th month of gestation, about 7 million germ cells or oogonia develop in the ovaries of the embryo. Most of these cells then die, with about half a million of them going through the first stage of meiosis to become primary oocytes before birth. After puberty, several primary oocytes begin to develop simultaneously, each contained in a follicle with supporting cells around it. One or more ovarian follicles rupture in the middle of each menstrual cycle, releasing the egg and surrounding cells into the fallopian tube. 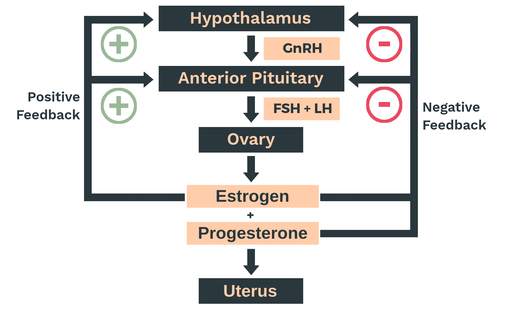 Ovarian hormone production occurs mainly in developing follicles. The two main steroid hormones produced by the human ovaries are progesterone and estradiol, a form of estrogen. The production of these two hormones varies greatly throughout the menstrual cycle:

The first day of menstruation is known as the start of the cycle. At this point, increased levels of FSH stimulate the development of several follicles in the ovaries. These early follicles, in turn, begin to produce estrogen. Usually only one of these follicles develops after the initial stage. Estrogen levels keep rising as the follicle develops. Eventually, progesterone also begins to rise. To some extent, the estrogen produced provides negative feedback on GnRH and gonadotropin secretion.

Around day 14 of the cycle, the anterior pituitary suddenly changes its response to persistently high levels of estrogen. Instead of suppressing the release of gonadotropins, estrogen now has a positive reaction. Why this transformation happens is not clear. Switching to positive feedback triggers a sharp increase in LH and, to a lesser extent, FSH. High levels of LH, in turn, initiate the process of ovulation, in which the follicle ruptures and an egg is released. After ovulation, the follicle is destroyed and the cells it contains are transformed. This new structure is known as the corpus luteum. Luteal cells produce more progesterone than estrogen, so after ovulation, blood progesterone levels are rapidly raised than estrogen levels. The corpus luteum remains active for only about 14 days, after which levels of estrogen and progesterone drop. The drop in estrogen levels eliminates the negative feedback on GnRH and FSH production, allowing the cycle to restart. 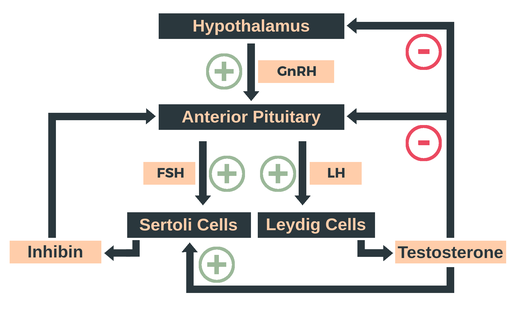 All phases of sperm production from germ cells to gametes occur continuously throughout life. Feedback control of testicular hormone production occurs in a similar pattern as the female reproductive system, GnRH stimulates the pituitary gland to release FSH and LH. FSH stimulates cells in the testicular tubules to produce sperm. LH stimulates the interstitial cells of the testes to produce androgens. Androgens also stimulate sperm production and have a negative feedback effect on the production of GnRH, FSH, and LH. FSH and LH also provide negative feedback on GnRH production. In men, this feedback loop keeps androgen levels relatively stable.

A good mnemonic for the hormones in the body responsible for fertility is FoG & LAD excluding the lowercase alphabet as shown:

A unique way to teach embryology is through a virtual lab simulation. At Labster, we’re dedicated to delivering fully interactive advanced laboratory simulations that utilize gamification elements like storytelling and scoring systems, inside an immersive and engaging 3D universe. Check out the Labster endocrinology simulation that allows students to learn about embryology through active, inquiry-based learning.