The base unit of matter that possesses the attributes of a chemical element is an atom. A typical atom is approximately 100 picometers in size. Discussions of the fundamental structure of matter date back to ancient Greece and persist to the present day. You may read more about atomic theory's evolution. Neutrons, protons, and electrons, which are neutrally, positively, and negatively charged, respectively, make up the atom. Neutrons and protons reside within the atomic nucleus, while electrons orbit the nucleus. The nucleus is a small, dense region at the atomic center.

The number of protons defines an atom's Atomic Number, whereas the total of neutrons and protons represents its Mass number. Since protons and electrons possess opposite charges, the difference between their respective numbers represents their charges. Ions are charged atomic particles.

Figure The components of an Atom

Identifying the elements can change during a nuclear reaction, which is a significant aspect in which nuclear reactions are distinct from other types of chemical processes. In addition, nuclear events are frequently accompanied by the release of massive quantities of energy, which can be as much as a billion times greater than the energy that is released by the redox process. Alterations in pressure, temperature,  or the existence of a catalyst do not typically have an effect on the yields and speeds of a nuclear reaction.’

Electromagnetism, weak nuclear force, and gravitation are the other three fundamental forces that are taken into account in the standard version of particle physics. The fourth fundamental force is referred to as the Strong Nuclear Force (SNF). As a result of its ability to overcome the repulsion that is caused by the electromagnetic force between charges that are comparable, it is the force that is responsible for holding the neutrons and protons in the nucleus together.

All particles that are relatively close to one another will be impacted by the SNF. Because it is only visible at distances less than one femtometer (1015 meters), this indicates that it is only conceivable within the confines of an atomic nucleus. At very small scales, the strength of the SNF is significantly greater than that of the other fundamental forces by a few orders of magnitude. However, as immediately as the distance among particles is greater than the femtometer, it is no longer effective, and other forces, such as gravity or electromagnetic force, become far more powerful.

Each atom's radioactive decay is a probabilistic (random) process. When a radioactive nuclei will decay cannot be foreseen. The half-life value, on the other hand, can be used to indicate how likely it is for an atom to disintegrate.

An isotope's half-life is the length of time it will take for half of its atoms to transmute into a different, more stable element or isotope. For instance, the half-life of Carbon-14, a radioactive isotope of carbon, is 5,700 years. This means that if we have a substance with a specific amount of carbon-14, the amount of carbon-14 will be reduced to half after 5,700 years. Beta decay will have taken place in 50% of the Carbon-14 atoms, converting them into Nitrogen-14 instead.

The process of radioactive decay has various uses. Carbon-14 is used to date fossils in this situation. By measuring the concentration of Carbon-14 in the present, we may estimate the amount of Carbon-14 that was present in the past through a number of indirect approaches. The amount of Carbon-14 that remains in the fossil is a direct indication of its age because it is known that Carbon-14 has a half-life of 5,700 years (during that time, half of the Carbon-14 will decay). Around the world, this method is employed to estimate the age of fossils that are up to 50,000 years old.

In "alpha decay," an unstable isotope emits two protons and two neutrons (alpha particle). This alpha particle is helium's nucleus. This happens with heavy, high-atomic-number elements. This procedure reduces the initial nucleus' bulk and number by 4. An alpha decay produces an alpha particle and a nucleus with a lower atomic number. Polonium-210 (Z=84) decays into Lead-206 (Z=82).

Beta decay happens when an unstable isotope releases a high-speed, high-energy electron. This corrects the nucleus' protons-neutrons imbalance. Neutrons in nuclei decay into protons and energetic electrons. This high-energy electron is ejected from the nucleus. Atomic number drops by one while mass stays the same (just one electron is lost in beta decay). Since beta decay loses only one electron, it loses less mass than alpha decay. Example: Nitrogen-12. Nitrogen-12 (Z=7) loses an electron when a proton becomes a neutron, forming Carbon-12 (Z=6) (beta particle).

When an isotope is energetic, it undergoes gamma decay. Adding "m" to the end of an isotope's name denotes this decay (e.g. Uranium-239m). This is usually caused by prior radioactive decay (either alpha or beta). To attain a more stable (lower energy) state, the isotope must release part of its stored energy (as energy is always conserved). As the photon moves away from the nucleus, it releases this energy. Gamma radiation. Because a photon has so little mass, the nucleus loses almost little mass. Gamma decay doesn't change the isotope's mass or number; it just lowers its energy level. 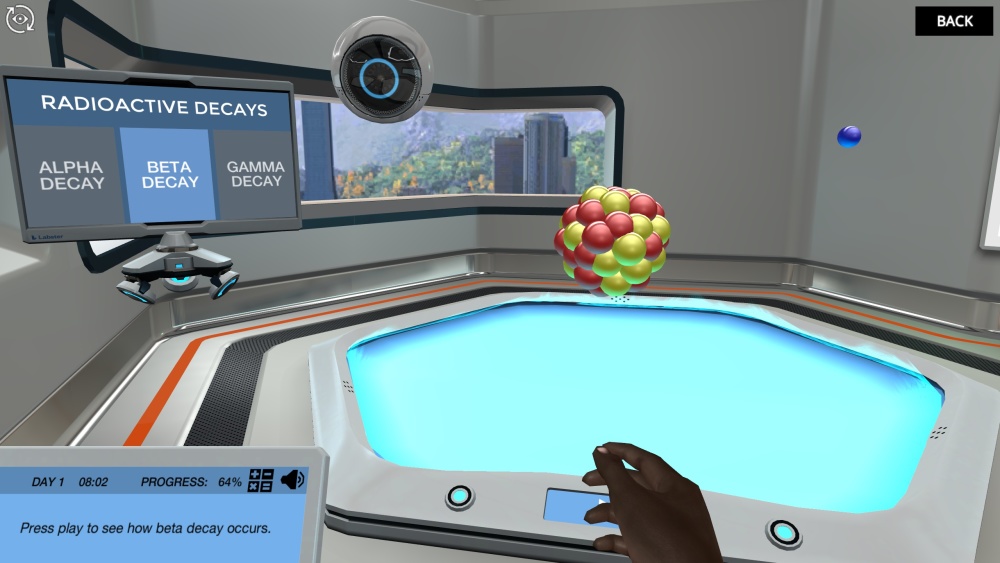 Why does Nuclear Chemistry: Understand the processes happening in the atomic nucleus difficult for students?

Frederick Soddy put forth the hypothesis in 1902 that "radioactivity is the result of a natural transition of an isotope of one element into an isotope of a different element."   Nuclear reactions entail changes in the particles that make up an atom's nucleus, and as a result, these events cause the atom to change as a whole. Because of their naturally occurring radioactivity, all chemicals heavier than bismuth (Bi), and even some elements lighter, are capable of "decaying" into elements with a lower atomic number. In contrast to regular chemical reactions, nuclear reactions do not result in the formation of molecules; rather, they result in the transformation of one element into a different isotope or an entirely different element.

3. It is impossible to experiment

Most of the time, laboratory experiments are used to explain the principles and theories of physics. That is totally improbable in this instance, though. Even scientists are forced to study the response in carefully monitored labs put up in remote locations because it is so violent and devastating. Another factor making this topic difficult for pupils is the lack of experiments to substantiate it.

1. Teach them the history of the topic

Valence electron interactions around an atom's nucleus are what cause conventional chemical reactions to take place. Henri Becquerel's discovery that uranium emits radiation in 1896 broadened the definition of chemistry to include nuclear transformations. Marie Sklodowska Curie started researching radioactivity soon after Becquerel made his discovery and finished the majority of the ground-breaking work on nuclear alterations. The first person to get two Nobel Prizes was Marie Curie, who was also the first woman to do so. The first for finding radioactivity, which she shared with her husband Pierre Curie and Henri Becquerel; the second for discovering the radioactive substances radium and polonium.

The most prevalent nuclear medicine procedure is the use of technetium-99m in the detection of coronary artery disease. It accounts for 80% of all nuclear medicine treatments performed globally. Technetium-99m offers nearly excellent properties for nuclear medicine scans. They are as follows: When it decays, it emits gamma rays and low-energy electrons. The patient receives a tiny dose of radiation. Because low-energy gamma rays have the same frequency as medical X-rays, they can be detected properly by a gamma camera. This is lengthy enough to investigate metabolic processes while being brief enough to reduce the patient's radiation dose.

It is possible to identify and evaluate the characteristics of various materials using nuclear techniques, as well as to monitor and improve industrial processes, sterilize and disinfect elements, measure pollution levels, and alter physical, chemical,  and biological characteristics to create new materials.

4. Tell them how carbon dating works

Even though the plant or animal stops absorbing when it dies, the radioactive carbon it has stored keeps on degrading. Estimating how much is left over allows one to determine how long something's been dead.

Virtual lab simulations are a novel technique to teach nuclear fusion, the source of energy. At Labster, we are committed to creating fully interactive, cutting-edge lab simulations that incorporate gamified aspects such as storytelling and scoring systems in an immersive, 3D environment.