Hydrocarbons are organic compounds that only have carbon and hydrogen elements. For example, methane is the most common hydrocarbon. So, carbon is the most important element of organic chemistry. Let’s discuss the electrons of carbon. Carbon has a total of 6 electrons, and its configuration is 1s2 2s2 2p2. There are 4 electrons in the outer shell of carbon. To follow the Octet rule, a carbon atom must share its four electrons with another atom via single, double, or triple bonds. The octet rule states that an atom must have 8 electrons in its outermost shell. Carbon shares its 4 electrons with the help of orbital hybridization. Three types of hybridizations are possible with carbon (sp3, sp2, and sp). Sp3 means that carbon will have 4 single bonds with other atoms. Sp2 means that carbon will make one double bond and 2 single bonds. Sp hybridization indicates that carbon will have one triple bond and one single bond to complete its valence shells.

There are some angles at which each bond attaches when we talk about bonds. If hybridization is sp3, then every single bond will make at an angle of 109.5°. In sp2, the anglebetween the double bonds is 120°. And in sp hybridization, the bond angle is 180°.

Why it can be tricky to learn carbon valence?

Most of the students find organic chemistry a little tough due to the vast range of carbon compounds. So, keeping all these in mind is a little hectic and exhausting for students. Let’s talk about some reasons which make it a difficult topic to understand:

There are thousands of carbon compounds that have different properties and nomenclature. There are several bonds and further bonds that are very difficult to understand and learn simultaneously. Organic chemistry revolves around carbon and its outermost electrons. The valence of a carbon atom is 4, and each carbon atom will have to make a different combination to complete its outer shells. There are hydrocarbons, and oxygen-carbon bonds and carbon also makes bonds with halogens and phosphorus groups. If we only study hydrocarbons, thousands of combinations of hydrogen and carbon have different properties and names. So, it feels tiring and complicated to learn organic compounds.

There are many mini concepts in this topic. Each concept comes with some definitions and new terms for students. The nomenclature of organic compounds is vast. Then, different atoms can make bonds with carbon. Prefixes and suffixes of hydrocarbons require time and practice. Then, there are different bonds between atoms, which have some angles depending on their type. So, remembering all the terms and definition makes it less exciting for students to study carbon valence.

As we are familiar with the reasons that cause difficulty in this topic, so some solutions can make carbon valence an easy and more approachable topic for students:

1. Learn about the people behind the science:

Students must know about the scientists which have prominent work in this field. Discoveries of different scientists and chemists contributed to organic chemistry advancement. Let’s learn about some scientists behind this concept:

In 1858, these two young scientists came from different backgrounds and independently discovered that carbon atoms can bond to make long carbon chains. This discovery solved many confusions of chemists about the multiple combinations of carbon compounds. Their discovery depended on the theory of Kekule that was proposed in 1857. This theory states that carbon is tetravalent (have valence of four) and valence is the combining capacity of atoms with different other atoms. In his paper on Salicylic acid published in 1858, Couper indicated valence bonds as straight lines linking to other elements. This is a very common and useful practice in most modern structural diagrams.

He was an American chemist. He first developed the hybridization theory in 1931, which explains the structure of molecules like Methaneby using atomic orbitals. He pointed out that a carbon atom can make four bonds with one s and three p orbitals. He supposed that in the presence of all four hydrogen atoms, the s and p form four equivalent combinations, which are called hybrid orbitals.

Each hybrid, oriented along one of the four C-H bonds, is designated sp3 to signify its composition. Although this idea was initially created for such basic chemical systems, it was later expanded upon and is now regarded as a useful heuristic for rationalizing the structures of organic compounds. Alkenes and methane's bonding is explained by hybridization theory. It is possible to accurately anticipate molecule qualities like acidity or basicity by determining the amount of p character or s character, which is mostly determined by orbital hybridization.

Students have some basic knowledge of chemistry and chemical compounds at this stage. The concepts of bonds and their angles are a little familiar. By keeping in mind the basic definitions and mini-concepts, students can make it easy for themselves to learn carbon valence. Discussion is a very important part of the study. The discussion gives a chance to students to share their perspectives and ideas about the concepts of the topic and ultimately it helps to make some clear and easy conclusions. Some of the definitions that students should keep in mind are:

Organic chemistry is the study of organic compounds, their nomenclature, and properties.

Hydrocarbons: The compounds which have only hydrogen and carbon atoms.

Carbon valence: The number of electrons in the outer shell of carbon that is available to form bonds with other atoms.

Orbital hybridization: The combining capacity of atoms through the single, double or triple bonds to follow octet rule.

Octet rule: It is stated that every atom must have eight electrons in its valence shell.

We often hear this proverb that practice makes it perfect. In the case of organic chemistry or organic compounds, practice is the key step toward learning organic compounds. There is a vast nomenclature of organic compounds; if you rely only on cramming, you will never be able to memorize the nomenclature. Practicing the different combinations of a carbon atom with hydrogen, oxygen, phosphorus, and halogens gives clearance to your doubts. You can easily remember the bond types, bond angles, and theories behind every compound.

Imagination is the art of science. You need illusions and imagination to study the concept in any scientific world. We often imagine the characters of a story while reading a storybook. It gives us a more exciting and easy approach to the concept. The same is the case with chemistry. First, you imagine then you want to see if your imagination is true. In reality, seeing the picture of your idea gives you satisfaction and connects you better with the topic. 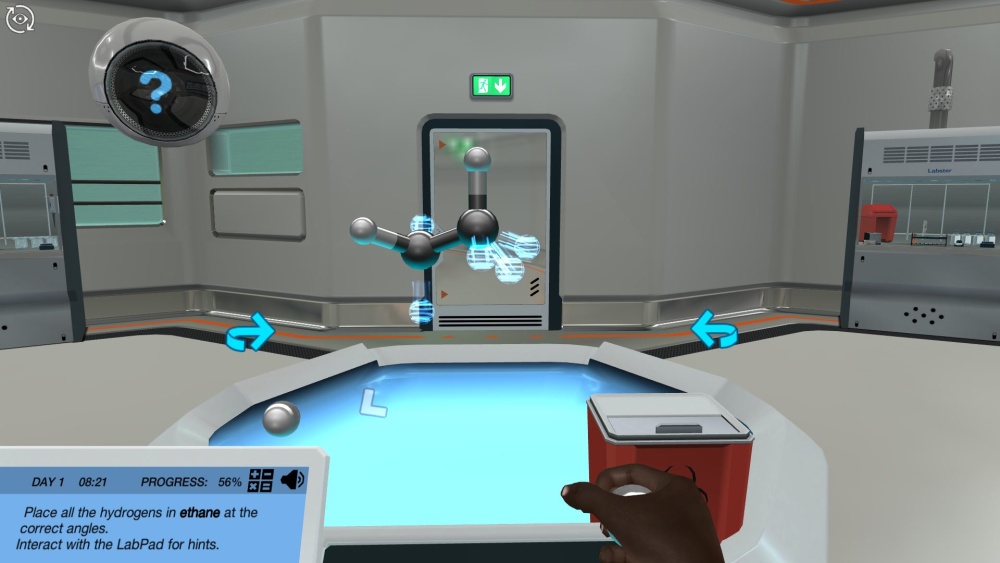 Figure: An image showing bond angles in a compound of Propene

Here is an image of a 3D simulation of a test conducted in Labster, and it shows the angles at which single and double bonds are bonded. This gives a clear representation of molecular bonds and their respective angles.

A virtual lab is a great source of learning for students. At Labster, students can watch 3D simulations related to their topics. Students can also apply their knowledge on Labster. It’s about the experience of applying your knowledge and seeing the results.

Teachers monitor the activities of students. There is a scoring theme in Labster. Simulations are short and easy to watch. This platform helps students to gain confidence in their knowledge and encourages them to try more theories. There is a 3D simulation in which the bonding of propene is shown. The allocation of different bonds is shown very clearly. Students can more easily relate to the topic and cope with the concept.

In the simulation of carbon valence, the whole testing process is shown where students can observe the compound of Propene with single and double bonds and its orientation.