5 Ways to Make Ionic and Covalent Bonds an Approachable Topic

Atoms are the building blocks of matter. Everything we see around is composed of millions and billions of atoms. Have you ever wondered how these atoms are held together?

In the case of an ionic bond, the transfer of an electron takes place from one atom to another atom. The atom which donates an electron becomes positively charged and is called a cation, while the atom which receives an electron is called an anion. This bond is between two ions, that’s where it gets the name ionic. Some examples of ionic compounds include table salt (NaCl), Sodium Hydroxide (NaOH), etc.

Since chemical bonding is the basis of chemistry, you will have to teach this topic during the introductory chemistry course. Students may find this topic hard to understand.  So, read on to learn five strategies through which you energize students about Ionic and Covalent Bonds.

Why the Concept of Ionic and Covalent is Hard for Students?

Chemistry is considered one of the tough subjects, the same is the case here. Here are three reasons the concept of ionic and covalent is hard for students.

Chemical Bonding feels like an abstract concept. The sub-atomic particles called electrons, within the microscopic atoms, participate in chemical bonding. It is impossible to visually imagine this type of reaction. And without any attractive visuals, the subject matter seems hard and dry for students.

2. It's hard to remember the Electronegativities

3. Drawing Lewis Structure can be Tough

When writing the detailed chemical bonding kinetics, students have to draw the valence shells of atoms of each element taking part in the chemical. For that, they need to know the electronic configuration of elements. Again, remembering these values and then drawing the Lewis structure can be hard for students.

5 Ways to Get Students Energized About Ionic and Covalent Bond

Keeping in view some of the reasons why the topic is tough for students, here are five suggestions through which you can make ionic and covalent bonds an easy-to-understand topic for students.

1. Comprehensively Explain the Structure of Atoms

Sometimes, students lack a proper understanding of the internal structure of atoms. Moving ahead without teaching basics may not be a good idea.

Start with basics; tell them about the internal structure of an atom, and how the electrons, protons, and neutrons are arranged.  You can tell them that the center of an atom is called the nucleus. It contains positively charged protons and neutrons. Around the nucleus, electrons revolve in different shells. These electrons of an element take part in chemical bonding.

The next thing to mention is valency. It is a property that tells us about the combined capacity of an atom with other atoms. Valency is governed by the presence of electrons in the outermost shell (valence shell). As a general rule of thumb, an atom needs to have 2 or 8 electrons in its valence shell to become stable.

For instance, if an atom has one electron in its outermost shell, it can either donate that electron or take an electron to fulfill its duplet. Another example can be carbon, it has four electrons in the outermost, meaning it will need four electrons to fill its valence. In this case, the valency of carbon is four.

Figure: The Atomic Structure of Potassium and Chlorine from Labster’s Simulation on Ionic Bonds.

2. Explain the Lewis Structure in a Step-Wise Manner

Lewis structure is the key to describing chemical bonds among atoms in a molecule. It is a concise way of representing the valence electrons of an atom and helps to predict the nature of the reaction that the atoms may undergo. Students often have difficulty understanding the Lewis structure. The best way is to explain it in simple steps.

Here’s a step-wise procedure you can adopt when drawing the Lewis structure of an atom or group of atoms in a compound.

For teaching chemistry to kids, multiple analogies can be used. The technical terms may be hard for them to digest. However, if you explain the same concept with some real-life analogies, that makes it easier for them to comprehend.

For instance, consider two siblings, John and Michael. John has 9 toys and Michael has 7 toys. Now, their parents want to divide the toys equally among them. So, they ask John to give one toy to Michael. In this way, both now have 8 toys each. The same happens in an ionic bond, if one atom has let’s say 9 electrons in its valence shell, it transfers one of its electrons to an atom with 7 electrons. As a result, both the atoms complete their octet and form an ionic bond.

To explain a covalent bond, you can use another analogy. Consider you have 3 burgers and you want to divide them among two people. You can give each person a burger a then share the third one by giving half to each person.  The same kind of sharing takes place in the case of covalent bonds. An electron, instead of being completely transferred, is shared among the two atoms forming the bonding.

4. Explain Some Interesting Facts About Ionic and Covalent Compounds

Chemical bonding, just like other chemistry topics, is rough and dry.  To make it more appealing, you can share some interesting facts about ionic and covalent compounds.

With technological advances, it is much easier to explain complex and tough processes with the help of simulations. Now, you can simulate experiments without the need for any practical equipment.

In Labster’s interactive simulation of ionic and covalent bonds, students first learn the basics of chemical bonding and apply their concepts to find found out about the nature and physical properties of two unknown substances. 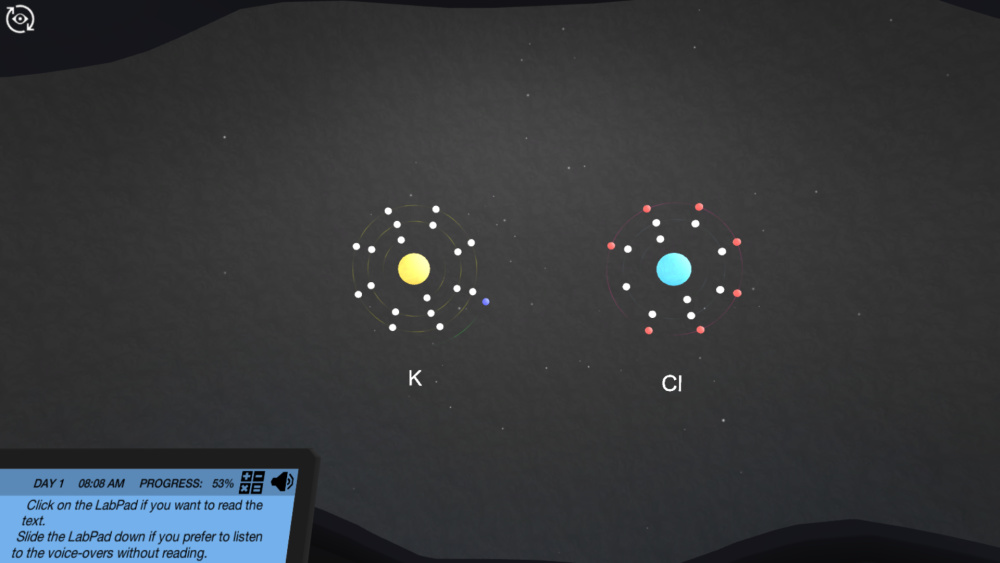 If you are interested in buying our simulation package for your students, you can contact us now. Feel free to ask any questions!