5 Ways to Make Materials Science with Neutrons Interesting for Students

Neutrons are subatomic particles and can be found in the nucleus of most atoms. The mass of a neutron is approximately the same as a proton mn = 1.675*10-27kg, but unlike protons, neutrons carry no electrical charge. If neutrons are expelled from the nucleus, as is done purposefully at the spallation source facility, the neutrons will decay with a half time of τ = 886s – close to 15 minutes. This is well above the time it takes a neutron to travel from the source to the instrument in a neutron experiment, which is usually less than a second. Neutrons exist as both particles and waves, called the particle-wave duality, which is the cornerstone of quantum mechanics. The de Broglie equation describes the relation between the velocity and the wavelength of the neutron (see figure 1. b). 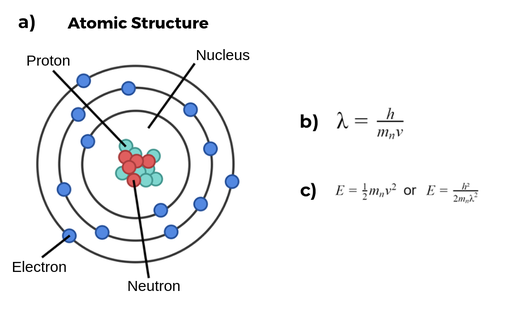 Figure 1: a) Illustration of the atomic structure of an atom. b) the de Broglie equation. c) The kinetic energy of the neutrons (Image source Labster theory).

Why do students face difficulties in learning materials science with neutrons?

The following are the three primary reasons that make materials science with neutrons challenging to understand.

2. Combination of physics and chemistry

Theoretical learning of this topic is complicated; we also cannot see these reactions practically. So the best option is video graphics. If you don't have the facility of multimedia, you can use your laptop enough; otherwise, draw the complete mechanism along with arrows identifying the reaction sites and products.

5 Ways to make materials science with neutrons exciting for students

Radiation is another word for the emission or transmission of energy through waves or particles. When particle or waves interacts with matter, it deposits energy, if the energy is high enough, it can break down or alter molecules which is radiation damage. For organic tissue like in the human body, this damage can destroy the cells or cause mutations that may, e.g., evolve into cancer.

There are several radiation protection measures to consider when working with neutrons, both in terms of shielding high-radiation areas and also in terms of personal protection by limiting your exposure to radiation, monitoring your personal dosage, and always follow the safety regulations.

With external exposure, there are two important factors to minimize when trying to avoid radiation damage to the body: the level of radiation in the area and the time you are exposed. Internal exposure is another problem entirely. Like external exposure, the amount of radiation is important, but with internal exposure, the radioactive material has entered the body; this means that you cannot limit the exposure time since it stays in the body. For this reason, it is strictly forbidden to eat, drink or smoke anywhere close to the instruments in a neutron research facility. The last personal safety measure is monitoring. Radiation damage is cumulative, so it is important to know how much total radiation a person has been exposed to.

3. Explain what happens inside a battery

There are different ways of producing neutrons, but the one we will focus on here is spallation. Spallation occurs when a high-power proton beam hits a heavy element target which releases neutrons.

Neutrons produced in the spallation process, and with most other methods of production, have a large range of energies and, therefore also wavelengths since these depend on each other. The typical energies of the neutrons when they leave the spallation target are in the order of MeV. The inter-atomic distances in materials are on the length scale of Angstrom (10-10m). A neutron with a wavelength of 1 Angstrom has an energy of ~0.08 eV. This energy is 8 orders of magnitude lower than the produced neutrons, so we need to slow down the neutrons in order to use them to study materials.

To slow down neutrons, we use what is called a moderator. In the moderator, the neutrons collide with atoms that roughly have the same mass as a neutron, such as hydrogen. In such a collision, it loses half its energy on average, and it thus takes about 25-30 collisions for the neutrons to cool from energies in the MeV (mega electron volt) range to the ten meV (milli electron volt) range.

Guides transport the neutrons from the moderator to most of the instruments where the experiment is carried out. The guides are tubes made to totally reflect as many neutrons as possible much like how an optical fiber would transport a beam of light.

For most neutron experiments, it is not enough to simply have an intense neutron beam; we also need to have a well-defined beam. When talking about a well-defined beam, we mean that we often want to control the energy or wavelength of the neutrons, sometimes we want to control precisely the direction the neutrons are traveling in before they hit the sample, and we might want to control exactly where on the sample they hit. The first of these three goals can be achieved by either choppers or analyzers. The other two can be achieved by collimator and slits, respectively.

The neutrons which are produced in the spallation process and thermalized in the moderator are guided toward the neutron instruments which the materials scientists operate. The neutron instruments are placed in the instrument hall, and each one has its own designated area where the sample can be inserted and where the neutrons are finally recorded in a detector. The choppers manipulate the beam pulse and wavelength band via an instrument control computer, but sometimes other types of beam tuning are needed via optical components close to the sample, such as a slit or a collimator. We describe some of these optical components as well as the detector below.

The only two parameters neutron detectors can detect is the position of the detected neutron and its arrival time at the detector. To be able to do this we need to know in what direction the neutron was traveling before it hit the sample. Here we use what is called a collimator.

Most of the time it is preferable that the neutron beam only hits the sample, or sometimes a specific part of the sample, and for this we use slits. Slits are adjustable openings where the sides are made from neutron-absorbing materials. A slit is usually placed just before the sample.

Since we cannot directly detect the neutron wavelength, neutron analyzers (or monochromators as they are called when placed before the sample) are sometimes used. They usually crystals that filter out specific neutron wavelengths. When the analyzer crystal is placed at a specific angle with respect to the incoming neutron beam it will diffract neutrons with a corresponding specific wavelength according to Bragg's law.

In neutron experiments, the beam used can be very intense, with billions of neutrons hitting the sample every second but since the interaction with the sample is very small, most of the beam will pass straight through the sample and hit the detector. This can damage the detector and therefore a plate of neutron absorbing material is placed right behind the sample to stop the transmitted direct beam so it does not hit the detector. This is of course not used in an imaging experiment since it is the attenuation of the direct beam that is of interest in such an experiment.

The European Spallation Source, ESS, is a neutron research facility. It can be compared to a giant microscope to study different materials. At ESS the structure, dynamics, and other aspects of materials can be studied using neutrons. Unlike particle accelerators and other such facilities where specific types of particles are investigated, it is not the neutrons that are investigated, but they are rather used as a probe used to make the observation we are after. Neutrons are not easy to produce for this reason large scale research facilities like ESS are needed. 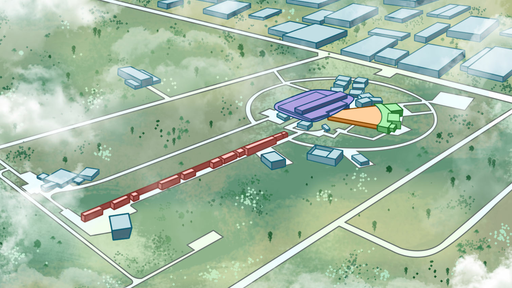 ESS is used for materials science, but you may not know that materials science is needed in many different research disciplines and applications. For instance polymer plastics are used in the food industry, magnetic materials are used in your laptop, you eat chemical powders as drugs, the strength of the building you are sitting may depend on the water diffusion in concrete, and you wouldn’t want to cut open a rare archeological artifact to figure out if it is corroded on the inside. All these things and many more can be studied and developed by neutron scattering.

In Labster’s interactive Materials Science with Neutrons: Observe what happens inside a battery! Virtual Lab, you will learn the basics of neutrons and how they can be used as probes in materials science. You will get to perform experiments in a modern large-scale research facility that requires special permission to enter.