5 Ways to make Mendelian Inheritance Easier for Students to Understand

5 Ways to make Mendelian Inheritance Easier for Students to Understand

Introduction to Mendelian Inheritance from genes to traits

We, humans, have two copies of each chromosome, each of which contains a large number of genes. Each of our parents contributes one chromosome set to our inheritance, and these two sets make up our complete set. Each of our cells contains a total of 46 chromosomes, 23 inherited from our parents, making up the paternal 23 and the maternal 23. The chromosomes numbered 1 through 22 are known as autosomes, while the final pair of chromosomes, which can be either X or Y, are known as sex chromosomes. Chromosome 1 is the longest chromosome, and it is also the chromosome with the most genes. It is also the chromosome with the most base pairs. The number of genes found on a chromosome does not always proportionate to the length of the chromosome. This is because alternative splicing and the amount of noncoding DNA both have a role in this phenomenon. The 23 different pairs of human chromosomes are depicted in figure 1. 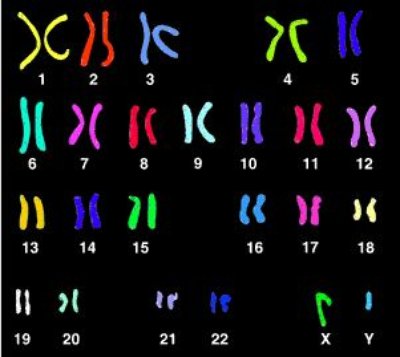 Gregor Mendel was an Austrian who, in the 1860s, developed a novel theory of inheritance predicated on his research investigation with pea plants. This theory was named after him. Before Mendel, the majority of people held the belief that heredity was the result of a combining of parental "essences," analogous to the way that the color green can be created by mixing blue and yellow color. Mendel, on the other hand, held the belief that heredity is the consequence of discrete elements of inheritance and that each individual unit (or genes) in a person's genome was capable of acting independently of the others. This Mendelian idea asserts that the inheritance of a characteristic is contingent upon the transmission of these units from parent to offspring. An individual receives one gene for a certain characteristic from each of their parents through the process of inheritance. This results in the individual possessing a pair of genes for that particular trait. In modern parlance, we refer to the various possible configurations of these units as "alleles." An individual is considered to be homozygous for a characteristic is if two alleles that constitute the pair for that characteristic are identical to one another, whereas they are considered to be heterozygous for the characteristic if the two genes that make up the pair are not identical to one another.

Then, according to Mendel's theory, genes can be composed of three distinct combinations of hereditary units, or "factors," which he designated as RR, Rr, and rr. The large "R" stands for the dominant factor, whereas the small "r" stands for the recessive factor. In Mendel's crosses, the F1 generation was Rr, the F2 generation was RR, Rr, or rr, and the starting seeds were homozygous RR or rr. The way these two interact determines the physical characteristic that is visible to us below.

Mendel's Law of Dominance states that when two organisms with different qualities mate, each offspring only demonstrates the trait of one parent and anticipates this relationship. A person will develop the dominant trait if the dominant factor is present. Only in cases where both components are recessive will the recessive characteristic manifest.

Why Mendelian Inheritance: from genes to traits is, a tricky topic?

1. Nature of the topic

The idea of genetics, inheritance, cell division, and traits' transformation, etc., is a raw and vast topic for students. Students struggle with the subject of this topic for a variety of different reasons. There is a possibility that some of them may not understand the fundamentals of cell biology. They can have difficulty due to the fact that this is an essential basis for genetics. They will have to work through problem after problem related to Mendelian genetics until they have a firm grasp on the underlying patterns.  They will have to understand why those systems behave in the manner in which they do. Combining the Central Dogma approach with the Gene Regulation technique can be tricky in the study of Mendelian genetics. In Mendelian genetics, it's important to keep working through problems one after another. This is a significant amount of labor for students.

Mendelian inheritance is more than genes, traits, cell cycle, mitosis, meiosis, phenotype, and genotype, etc. Students find it confusing about the definite meaning of alleles, dominant, recessive, heterozygous, homozygous, and co-dominant traits etc. They have to put extra effort into understanding these terminologies, which is a laborious and not very long-termed process.

Most of the students get their knowledge from textbooks. Although every child is an individual, they all follow the same curriculum. Since textbooks do not utilize multimedia, it is possible that not all youngsters will be interested in reading them. As a result, it is possible that it did not provide an accurate picture of the process by which qualities can be made. Although there are several ways to teach an idea, the textbook is the most common. The purpose of textbooks is not to facilitate everyday learning; rather, books are intended to be read within a specific time period. Every day, there more studies are conducted on the experiment of Mendelian.

Five ways to teach Mendelian Inheritance: from genes to traits in an interesting manner.

A student should have a clear idea of what he/she is going to learn. Teaching them proper terminologies in a conceptual form is important. The concept should include the following:

2. Interest them with the examples of Mendelian genetic disorders

Telling students why we are studying the current topic and which disease can be related to Mendelian inheritance. Thalassemia is evidence of this disorder that is passed down across generations via the X chromosome. In patients affected by this condition, the body generates an abnormally significant level of the protein known as hemoglobin. Thalassemia is known as Mendelian disorder since it is triggered by a single allele defect in the HBA1 as well as HBA2 genes. These genes are transmitted in a Mendelian recessive way. Therefore, the disorder can only be passed down via families.

One further example: hemophilia, sometimes known as the royal disease, got its name from the fact that it was originally discovered in a royal family. This is an incidence of a recessive condition that is linked to X. This condition is transmitted from an unaffected carrier female to her boys, who then inherit the hemophilic genes from their mother. It is extremely unusual for females to be affected by this condition since in order for a child to have the disease, either their mother or their father must have hemophilia. Carriers of the disease can pass it on to their children.

In order for students to estimate the genetic makeup of a family, activities such as exploring Punnett Squares and Pedigree trees might be assigned to them. What is true for the coloration of the fur on mice can also be applicable to the color blindness that some people have. Will they be able to ascertain whether the patient's offspring will pass on his vision impairment to their offspring? Students like things that engage their minds rather than cramming laws and facts.

Because the process of genes to trait development, also known as heredity, takes place at the molecular level, it might be difficult for pupils to understand. If there was some kind of graphic representation of these biological concepts, then the students would grasp them much better. The utilization of 3D models or video representations demonstrating events such as crossing over or equitable distribution of chromosomes could be made possible in the classroom thanks to advances in technology that educators can leverage. Students would be attracted and excited to learn more about the division of cells if they saw a visual representation like the one given below, which is an example of such a representation.

The process of cell cycle and inheritance can be taught using a virtual lab. Labster's advanced laboratory simulations use gamification components like narration and scoring systems in an immersive 3D realm where you can learn about making Punnett squares.

Check out how to make a pedigree in 3D with the help of Labster’s Pedigree simulation. Watch cells divide to become reproductive cells in the reproductive system to learn about inheritance.

Discover why colorblindness affects more males than women by deciphering X-linked heredity in the Mendelian simulation.

Teachers can make more incisive points while using Labster's virtual laboratory simulations since they provide students with greater visual options so they can follow each stage of the production of different features. They are better able to comprehend how and why each allele combines and what phenotype can result, thanks to the 3D simulations.

Bowler, PJ. The Mendelian revolution: The emergence of hereditarian concepts in modern science and society. Journal of the History of the Behavioral Sciences. 1990 October; 26:379-382.