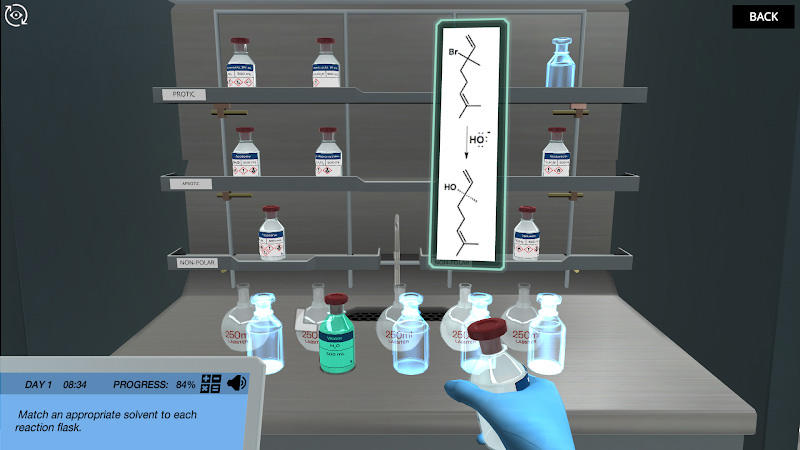 Why do students struggle to learn nucleophilic addition and substitution reactions?

Before going for any topic, the basics of the topic must be cleared. To teach the organic compound, you must first clear the concepts of basic organic chemistry. They don't know about the functional groups, attacking and leaving groups in any compound. Before going further, you must clarify what saturated and unsaturated organic compounds are. They also face difficulties when they have to identify any organic compound by the IUPAC name.

2. A large number of reactions and reaction mechanisms

Theoretical studies of organic compounds and reactions are tricky because most compounds have 3D structures. Organic reactions involve complex reactions mechanisms that are difficult to understand theoretically. You can use 3D models of organic molecules so that students easily understand the structures of molecules. For reactions, mechanisms must use video graphics; if possible, draw the complete mechanism along with arrows identifying the reaction sites and reacting groups.

1. Review the basics of organic reactions

Before going to organic reactions following terms must be cleared:

2. Explain factors that contribute to nucleophilicity

A nucleophile reacts by donating electrons. This means, that the higher the electron density on a species, the more nucleophilic it is, all other things being equal. Generally, a negatively charged species will be more nucleophilic than its neutral counterpart.

Being extremely good nucleophiles, Grignard reagents are highly reactive compounds. This means that we would prepare these in situ in the lab just before we carry out our Grignard reaction. It also means we need to keep any trace of moisture out of our reaction. All glassware and solvents must be anhydrous (dry), and the reaction must be kept in a closed system where water and air cannot get in.

Once the Grignard reagent has been prepared, we can add a solution of our carbonyl compound (aldehyde or ketone) to the reagent to perform the Grignard addition reaction.

The final work-up step involves pouring the reaction mixture into a mixture of sulfuric acid and ice to break down the Grignard transition complex and produce our alcohol product.

Nucleophilic substitution can occur via one of two competing reaction mechanisms. The two main mechanisms are the SN1 reaction and the SN2 reaction. The S denotes 'substitution,' N for 'nucleophilic', and the number represents the kinetic order of the reaction - or the number of reagents involved in the rate-limiting step. There are several factors that could affect whether a substitution reaction occurs via the SN1 or SN2 reaction mechanism, not limited to the high nucleophilicity of the nucleophile, willingness of the leaving group, solvent type, and steric bulk of the alkyl substrate.

SN1 reactions are two-step, unimolecular reactions and proceed via an intermediate carbocation. The first carbocation-forming step is the slower of the two and therefore determines the rate of the reaction. The second step involves the rapid attack of the nucleophile to the newly-formed carbocation. The reaction has two transition states, one before and one after the intermediate. Lowering the energy of these transition states will lower the activation energy of the reaction.

An SN2 reaction arises from combining a good nucleophile and a substrate with an electrophilic reaction center attached to a good leaving group. A good example of this is the carbon-halogen (C-X) bond you'd find in an alkyl halide.

Alkyl halides (also known as haloalkanes) are hydrocarbon compounds in which one or more of the hydrogen atoms have been replaced by a halogen atom (iodine, bromine, chlorine, or fluorine). Incorporating halogen atoms into a hydrocarbon changes the compounds' physical properties, affecting size, electronegativity, bond length, and strength.

Alkyl halides are ideal substrates for reactions that require a good leaving group. The high reactivity of alkyl halides can be explained in terms of the nature of the C-X bond. The differences in electronegativity between the carbon and halogen atoms create a highly polarized bond resulting in a slightly electropositive carbon and slightly electronegative halogen. This electron-deficient carbon becomes a hotspot for nucleophilic attack, making alkyl halides excellent substrates for nucleophilic substitution and elimination reactions.

Other factors - like which C-X bond you need to break - also contribute to the alkyl halides' reactivity and the likelihood of a reaction occurring or not. In selecting the best halide starting material for a reaction - we also need to consider the strength of the C-X bond we are trying to break. C-F bonds are so strong that fluoroalkanes rarely react, so they don't make great starting materials. C-X bond strength falls as we go down the periodic table, meaning the weakly-bonded iodide is the most willing to leave the group, closely followed by bromide.

In Labster’s interactive Nucleophilic Addition: Explore the Grignard Reaction Virtual Lab, you will learn the principles of the nucleophilic addition reaction and put your knowledge into practice by performing a Grignard reaction to synthesize a potential cancer drug candidate. You’ll have the chance to make a ground-breaking drug discovery!

In Labster’s interactive Nucleophilic Substitution Reaction: Alkyl halides substrates Virtual Lab, you will explore the factors that affect substitution reactions and learn how to promote different substitution mechanisms. Put your substitution expertise to the test by using retrosynthesis and reaction design principles to create an assortment of aroma molecules in developing exciting new beverage flavors for a craft brewery!