5 Ways to Make Propagation of Sound an Approachable Topic

Sound waves, like other waves, are produced by vibrations. However, unlike other mechanical waves, we can hear them through our ears.

When an object vibrates, it creates pressure variation in the nearby particles of the medium. These areas of compressions and rarefactions constitute a complete sound wave. And this is how the sound waves propagate in the air or any other medium.

Students usually think that sound waves are just used for communication. However, they are several other examples where sound waves are employed. For instance, the SONAR technique which is used for navigation and measuring sea depth uses sound waves. In the medical field, ultrasound is significantly important to diagnose various underlying medical conditions.

Since it is one of the things we encounter daily, studying sound, its nature, and its properties is quite important for us. As a matter of matter, there is a dedicated field in physics known as acoustics, where people study the production, propagation, and properties of sound waves.

For students, this field of study can sometimes be trickier to understand. In this article, we will cover the three reasons why the propagation of sound can be hard for students to understand. Then, we will mention five ways through which you can make this topic interesting and intriguing for students.

Why the concept of Propagation of Sound is tricky for Students?

Let’s first explore three reasons why understanding the propagation of sound can be hard for students.

Sound waves can be heard as our ears can detect them. However, when studying these waves, we need to draw how their waveform. Unlike light waves, these waves are invisible, so it is hard for students to visualize the path of sound waves and how they travel across the air.

Sound is not a brief topic, you have to mention the production, propagation, and then detection of sound. All these sub-parts are lengthy in terms of content. Understanding all these things in a single go can be tough for students.

3. Understanding the Relationship between Characteristics of Sound is Hard

Sound waves have different characteristics like loudness, pitch, quality, and intensity. Each of these qualities explains a different aspect of sound. Moreover, remembering how each of these is interrelated with each other is difficult tough for students.

5 Ways to Get Students Energized about Propagation of Sound

With some of the reasons listed above, here are five ways through which you can make sound propagation an interesting topic.

1. Mention Some Exciting Facts about Sound

An interesting way to start your lecture is by mentioning some fun facts about sound. These surprising facts will encourage students to learn more and they will take interest in the content being taught to them. Here are some exciting facts about sound.

2. Explain How Sound is Produced, Propagated, and Detected

When an object vibrates it set up the pressure wave in the nearby particles of the medium. For instance, when we speak, the vocal cords set up an oscillatory motion in the air. As a result, a series of high- and low-pressure areas is created in the air. These areas are called compressions and rarefactions, respectively. 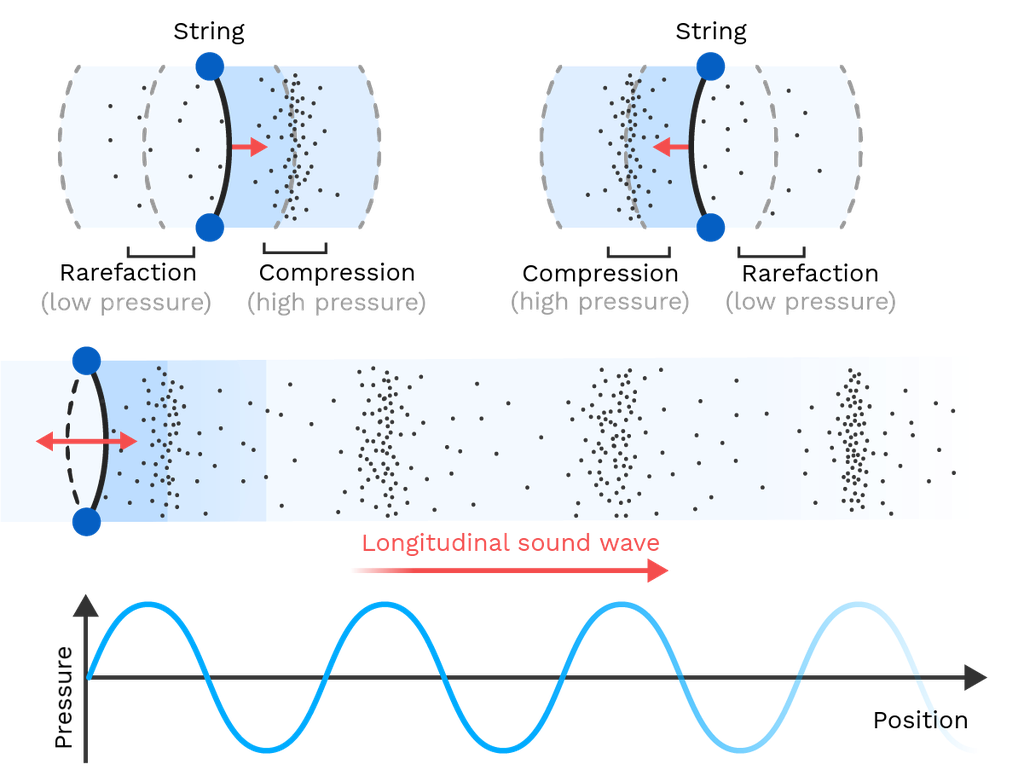 Figure from Labster: It shows how a plucked string produces compression and rarefaction in the air

Sound, being a mechanical wave, needs a medium to produce these compressions and rarefactions in the particles of the medium. Unlike light waves, sound waves cannot travel through a vacuum. That is why we can see the sun but not hear what’s happening on it.

First, the sound is produced, then propagates through the medium and travels to us. How does our ear detect it?

The process is quite simple. The sound waves containing the pressure variations enter the ear canal, and then strike the eardrum; it is a boundary outer and middle ear. The middle year portion, which is right to the eardrum, has air inside at atmospheric pressure. When the sound waves strike the ear drum, it receives a fluctuating net force from the left. As result, it vibrates as per the frequency of the sound wave.  The eardrum vibration triggers the three bones, which further produce vibration in tiny cells in the cochlea. Consequently, some nerve signals are sent to the brain which interprets them as sound.

3. Relate it to the Real World

Physics is all about applications. The whole idea of teaching is to inform students about the processes and phenomena happening around them. We all know that sound waves are used for communication. However, apart from that sound waves have plenty of other applications in the real world.

SONAR (Sound Navigation and Ranging) is a popular technique utilizing waves for navigation, detection, and measuring depths underwater. The SONAR is of two types; active and passive. In passive, we look for sounds to get information. While in passive, we produce a sound and measure the time for its echo to return. The passive technique is largely used to determine sea depths.

The wave of frequencies higher than the audible frequency is called ultrasound. Ultrasound is used in the medical field for internal imaging of organs, such as kidneys, stomach, breasts, etc. The same technique to study the development of the fetus in mothers.

Sonochemistry is a research domain in chemistry, where ultrasound is used to initiate chemical reactions.  Ultrasound creates vacuum bubbles which when implode provide extreme temperature and pressure conditions.

Sound waves also align the molecules and can be used to create new materials. For instance, future batteries, and air purifiers may use materials developed through sound.

Kidney stones are quite common in people. And people usually develop at some part in their lives. A procedure called lithotripsy is used to get rid of kidney stones. A sound beam hits the stones and turns into small pieces that are excreted out of the body through urine.

4. Explain the Properties of Sound with Different Examples

When discussing sound propagation, it’s necessary to mention characteristics like frequency wavelength, amplitude, pitch, speed, and how they are related to each other. 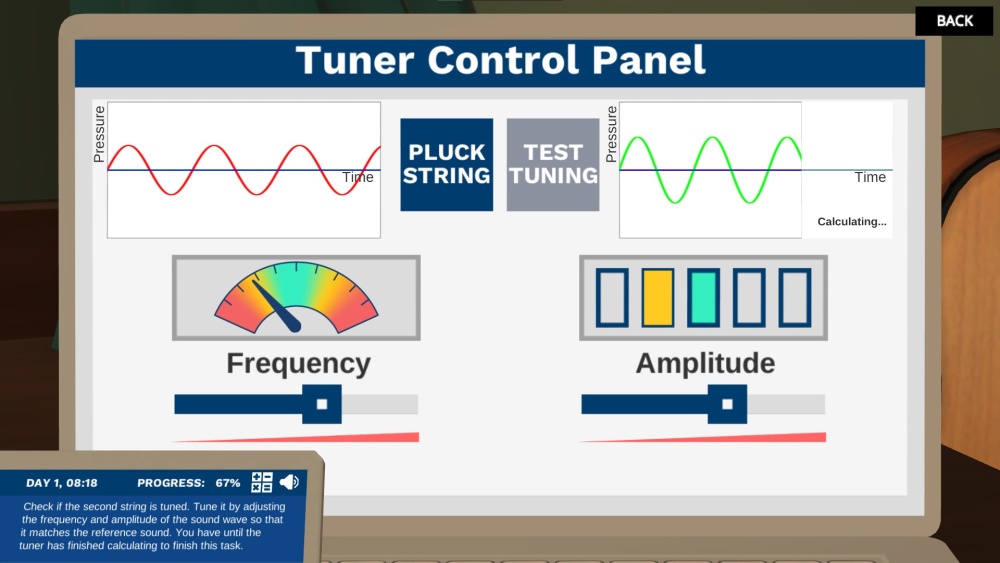 Figure from Labster virtual lab Propagation of Sound Waves: Seeing the change in waveform by altering the frequency and amplitude

Loudness is another important characteristic through which one can distinguish between loud and faint sounds. It is measured in decibels. Since it is a relative term, it’s a dimensionless quantity.

The loudness of the sound depends upon the amplitude of the vibrating body. For instance, if you pinch the guitar slightly, the sound is faint. However, if you pluck the strings violently, then a loud sound is produced.

Pitch is the characteristic of sound through which one can differentiate between shrill and grave sounds. For instance, the voice of girls is grill, while men’s voice is grave. Pitch is associated with frequency; higher frequency means higher pitch and vice versa.

The characteristic of sound through which one can differentiate between sound waves of the same loudness and pitch is called quality.

For instance, you can distinguish between sound played by the flute and piano due to the quality of the sound. In the case of quality, the two waves can be of the same pitch and loudness. However, the only difference is their waveform.

Sound Energy per unit area held perpendicular to the direction of propagation of the sound wave is called intensity of sound. The intensity, like loudness, also depends on the amplitude of the sound.

When explaining how sound travels, reflects, and changes its path, the best way is to use simulations. Since sound waves are imaginary, you cannot show them to students. However, computer simulations can model it for you.

Here’s where Labster simulations are great. We provide 3D gamified simulations through which students learn and make fun at the same time.  For instance, in Labster’s simulation on the Propagation of Sound Waves, students explore how sound is produced by vibrating objects. They visualize the waveform of the sound waves by its characteristics.