Neurons (nerve cells) act as the mail carrier of the nervous system and are responsible for transferring information between nerve cells, gland cells, and muscles—the brain functions due to the structural and functional aspects of interconnected neurons. The total number of neurons varies between species; however, the basic structure remains the same.

The basic structure of most neurons consists of a cell body, axon, and dendrites. The cell body is filled with a nucleus and cytoplasm. The axons and dendrites are the extensions of the cell body, each specific in its architecture and action. The point of contact between two neurons where they communicate is called the synapse.

The messages between neurons are sent or received as electrical impulses. The range of these electrical impulses varies from a few centimeters to more than one meter in length. The axons are wrapped in the myelin sheath, accelerating the signal transmission along the axon. The anatomy and physiology of neurons get complicated as we unravel more details. It makes it an overwhelming and challenging experience for educators and students.

At Labster, we aim to make this topic less daunting and more approachable for students. But first, let’s discuss three reasons why it could be a tricky subject in the first place. Continue reading to discover interesting strategies to help you with more efficient lesson planning and lecture delivery.

Why are the anatomy and physiology of neurons tricky?

The intricacies involved in the structure and function of neurons make it a rather taxing experience. Let's discuss and evaluate the reasons that make it a tricky topic.

Neurons are microscopic components yet an essential aspect of the nervous system. Students cannot feel or see the neurons sending messages with their naked eye. In fact, we need specialized instruments to see the neurons in action. It’s a fascinating experience to watch the interconnected network of neurons; however, it remains hard to believe that chemicals/ions are involved in transmitting nerve impulses.

Three types of neurons are differentiated based on shape, size, location, and function in the body. These intricacies make the topic lengthy and challenging to comprehend for some students. The sensory neurons have a cell body in the middle with dendrites at both ends connected by a long axon. On the other hand, the motor neurons have a long axon in the middle with dendrites on one end and a cell body on the other. The role of four types of neurons are as follows:

Sensory neurons deliver signals from outside the body to the glands, skin, and muscles, leading to the central nervous system.

Motor neurons work opposite to the sensory neurons as it carries signals from the central nervous system to the outer body parts.

Receptor neurons efficiently detect stimuli like light, sound, and touch and convert them into electrochemical energy transferred to the CNS by sensory neurons.

Interneurons have a relatively simple function: sending messages from one nerve cell to another. 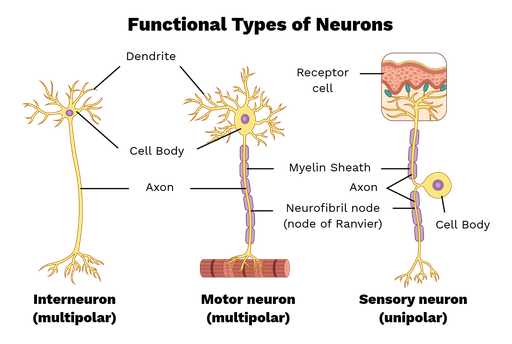 The junction of two neurons is where chemical and electrical changes occur, primarily responsible for sending messages between the body and the brain. This point of contact is known as a synapse, where chemicals (neurotransmitters) and ions are involved and regulate the path of electrical impulses. The different types of neurotransmitters have dedicated roles, making learning about neurons a content-heavy and tricky topic.

There are many ways to make learning about neurons an interesting and fun experience. Here we will discuss the top five practical solutions educators could take advantage of in their lessons. The conventional ways of learning seem less effective in boosting students’ productivity. Interactive strategies like those discussed below have shown proven positive results.

Activities are a great way to keep students engaged in the classroom. There are many easy and manageable classroom activities that you could imply while discussing neurons.

You could never go wrong with printables as they work at every level of education. However, make sure that worksheets are related according to the grade you teach. Find some templates of unlabelled diagrams of neurons (with detailed anatomy). Remember! Give students enough time for preparation before introducing the activity. It is usually a good idea to provide a range of options for labeling, especially if you schedule this activity on the same day as the lecture.

One way to make such topics relatable for students is through 3D models. Encourage students to create models themselves as a group activity. Such hands-on activity makes remembering and retaining memory easier for a longer time.

The information in textbooks might feel daunting at times. Researching some fun facts about the topic will help educators make things flawless for students. Here are some of the exciting facts about neurons that you could use during your lessons. Such related but awe-inspiring knowledge makes students intrigued to learn more about the topic.

3. Lighten up the mood with some fun riddles and jokes

Traditional methods of learning are straightforward and to the point. However, today's youth prefers to do and learn things in clever ways. As a result, educators are constantly on the lookout for novel concepts that are appropriate for younger audiences.  You can never go wrong with amusing riddles and jokes since they help students understand crucial scientific topics quickly. The following are some brainy jokes and puzzles about neurons:

A virtual laboratory simulation is a great way to teach muscle tissue: structure and function. At Labster, we're dedicated to delivering fully interactive advanced laboratory simulations that utilize gamification elements like storytelling and scoring systems inside an immersive and engaging 3D universe.

Check out Labster's simulations for Microanatomy of a Neuron: Build your own neurons! Virtual Lab. In this simulation, you’ll get to follow the path of the electric impulse and how it is propagated. You’ll see how the action potential influences the generation of the signal and which cells are more likely to have electric or chemical synapses. You will also learn about neurotransmitters' importance and mode of action.