5 Ways to Make Waves an Exciting Topic for Students

The movement of particles can be thought of as the movement of matter from point A to point B. Just picture a car moving along a road and perhaps a football being passed back and forth between players. It is possible to move things around from one location to another. Waves vary from one another. The act of moving causes them to carry energies with them, and this act of moving is what we refer to as propagation. Imagine a wave circling football stadium fans. As people stand and sit quickly, a ripple effect spreads through the audience. The wave travels around the stadium, but the spectators don't move. Every time someone stands or sits, they release a rush of energy that motivates the next person. The wave passes energy from person to person around the stadium. This event is called a wave, and the medium is the audience.

When a wave moves through space and transmits energy, particles in a medium oscillate. Equilibrium is the unchanged position. The water itself creates pond waves. Air is a guitar's sound medium. Visible light is an electromagnetic wave. Electromagnetic waves are special. Thanks to electric and magnetic field oscillations, they can transit space without a medium. So, Sunlight can reach the cosmic emptiness.

An oscillating point on a wave that has moved away from its equilibrium point to the greatest extent possible has an amplitude equal to that amount. Imagine waves on a pond. A single ripple has a peak elevated above the unaffected surface and a trough located below it. The amplitude can be defined as the displacement that occurs either from the surface to a peak or from the trough to the surface; nonetheless, these two displacements have the same meaning. The energy of the wave has a strong correlation to the amplitude of the wave. Think of it like this: on a day with calm seas, the waves lap the shore with a little amplitude, but on a day with turbulent seas, the waves smash into the shore with massive amplitudes, pouring enormous amounts of energy. The distance between any two consecutive identical wave segments is known as the wavelength. This distance can be measured from peak to peak or trough to trough. 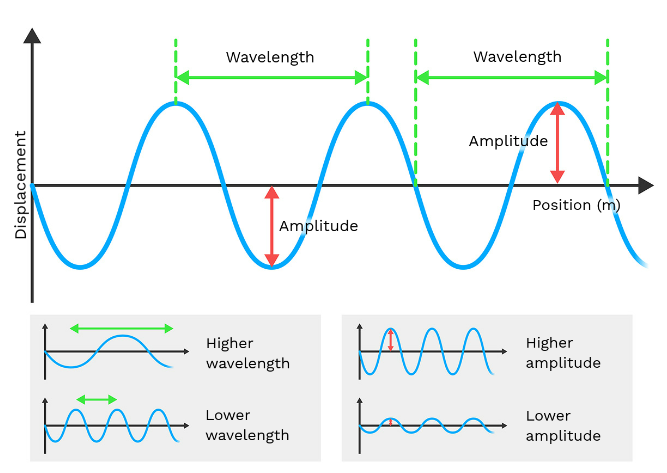 These attributes have an effect on how the waves interact with the outside world. For instance, the length of the wavelength of visible light determines the color that we see, but the amplitude of sound waves impacts how loud we consider them to be. Both of these factors are influenced by electromagnetic radiation.

It is possible to classify waves as either longitudinal or transverse, depending on the direction in which the wave moves. The sound waves generated by a guitar force the particles in the air to vibrate in a direction perpendicular to the path that the sound waves take. A longitudinal wave would look something like this. On the other hand, the waves generated while a pond's surface is rippling force water particles to oscillate in a direction perpendicular to the wave's path. These are known as transverse waves. 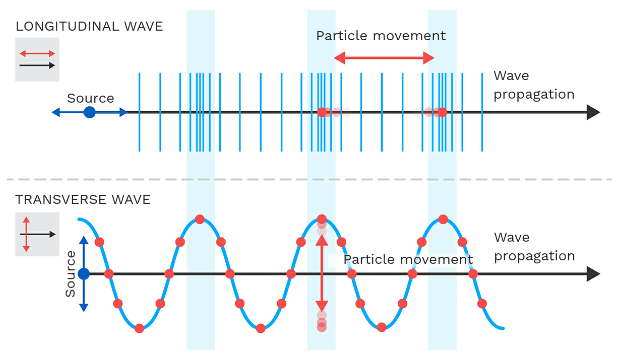 Waves can also be divided into standing and progressing types. The peaks of progressive waves appear to move because energy is transferred from point A to point B. They don't for standing waves. Most waves in the actual world are progressive waves, like sound and ocean waves. When waves are constrained in space, standing waves develop as a specific instance.In contrast to standing waves, where the degree of oscillation varies with position, progressive waves exhibit uniform oscillation at all points along the wave. They have specific spots called stationary nodes, and anti-nodes, which oscillate the greatest. Standing waves are difficult to find in nature since they only happen under specific conditions, yet musicians frequently employ them. For instance, when a guitar string is plucked, it causes a standing wave to form on the string.

Wave speed resembles particle speed. Particles are substances, while waves are energy. Peaks and troughs propagate in consecutive waves. Standing waves transfer no energy, don't propagate and have zero speed. Below is a 1 m/s wave. v = f relates wave speed to frequency and wavelength. It depends on the wave's medium. Sound waves move through the air at 343 m/s, while light waves travel at 300,000,000 m/s in a vacuum. This is why we see lightning before hearing thunder. 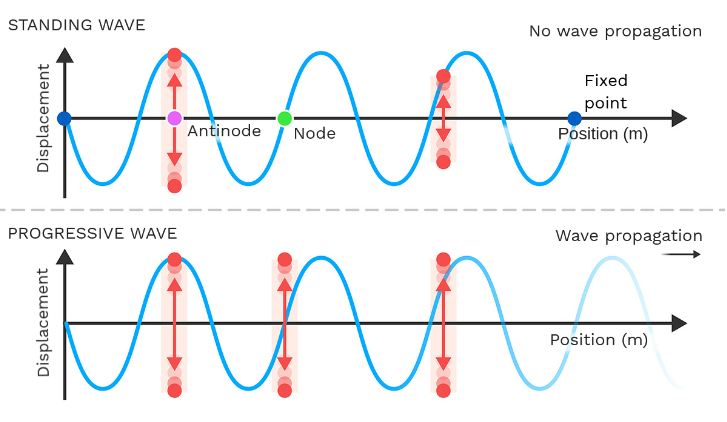 Why is Waves a difficult topic for students?

Wave is a field of study that investigates a variety of waves, including photons, troughs, crests,  frequencies, and wavelengths. Because it is not possible to perceive the waves with the human eye, these are notions that are considered to be abstract. The reason for this is that the waves are of a very minute size. A photon is a particle that makes up a wave less extensive than a complete wave. Therefore, pupils may experience challenges while attempting to comprehend these complex ideas.

Students may have difficulty distinguishing between the many types of waves due to the diagrams and articles in their textbooks. Because of this, it becomes more difficult for them to construct an adequate conceptual framework. If we merely use the word "waves," we cannot adequately express the transition of energy. Students are likely to be confused about what occurred because the terminology remains consistent throughout most of the procedure. Furthermore, the graphics in their textbooks cannot convey the complete picture.

Students need to commit to memory a number of different terminology pertaining to the different sorts of waves. Many people have a difficult time differentiating the concepts of period and frequency. As an illustration, the phrases energy, wavelength, and frequency are utilized while discussing electromagnetic waves. Therefore, it is possible for pupils to become perplexed when they read terminology related to frequency in one paragraph and wavelength in another paragraph.

Five ways to make waves an exciting topic for students

1. Telling them the basics

The ancient Greeks were the first people known to study waves after they noticed how the strings of musical instruments could be made to vibrate in order to produce sound. Christiaan Huygens, a Dutch mathematician and astronomer is credited with developing the first comprehensive wave theory of light. Within the context of this theory, he was also able to determine the principles governing reflection and refraction. He proclaimed a wave, which is the movement of disturbances from one location to another in a way that is consistent and well-organized. The waves that travel on the surface of the water are the ones that people are most familiar with, but waves may also be seen in sound, light, and even the motion of subatomic particles.

The length of time required for a spot on a wave to go through one full cycle of oscillation is referred to as the wave's period. This is the amount of time that must elapse for one complete wavelength of a progressive wave to travel past a given point in space. The number of full oscillations that occur in one second is the definition of a wave's frequency. This is expressed as a frequency in Hertz (Hz), which is equivalent to one oscillation occurring per second. The movement of a single point along a wave over time is depicted in the following graphic. We may find a relationship between the period, denoted by T, and the frequency, denoted by f, by utilizing the straightforward expression: T = 1/f. The way in which the wave interacts with the outside world is likewise influenced by these features. The frequency of a sound wave, for instance, can alter the tone or pitch of the sound that we perceive. When the frequency of the wave is increased, the pitch of the sound also increases.

3. Application of Waves from the real world

Real-world applications are familiar to students. Water's medium is transverse waves. Most typically, the wind blows across the water's surface. Plucked guitar strings vibrate. The frequency of this oscillation depends on string thickness, tension, and length. Since the wavelength is twice the string length, we can only see half at once. Thicker strings produce lower-frequency waves. Air particles oscillate when a guitar string vibrates. This creates a progressive longitudinal wave with the standing wave's frequency. Frequency affects pitch having unique light waves. On oscillating electric and magnetic fields, transverse waves propagate through space. We perceive the Sun's light but not its nuclear processes. Unlike light, sound travels through a medium. 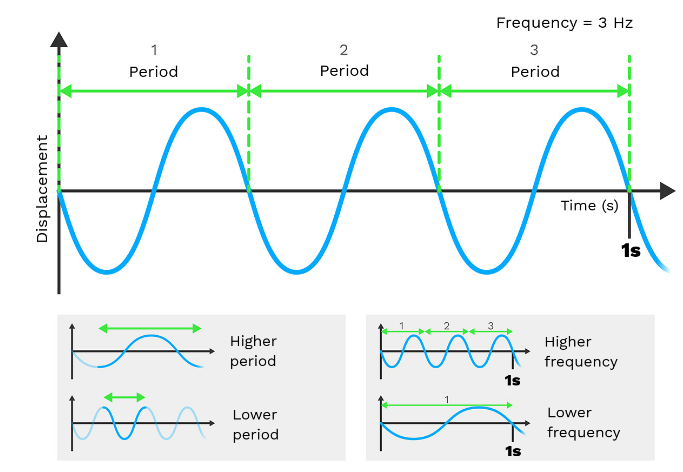 An advanced method of learning about the electromagnetic spectrum is through a virtual lab simulation. We at Labster offer 3D lab simulations with gamification features like narrative and a scoring system. The realistic simulation of waves by Labster illustrates their characteristics, subtypes, and outward manifestations. Check out Labster’s What are waves? Virtual Lab.