Magnets are in your phone, your computer, and even your wallet if you are carrying a credit card. So, we all are surrounded by a world of magnets.

The concept of a magnetic field originates from a moving charge. When a charge essentially an electron moves, it generates current, and a magnetic field around it.  Since all materials are made up of atoms, in which electrons orbit around the nucleus of an atom. These electrons generate a weak magnetic field. Therefore, each atom behaves as a tiny magnet.

However, all substances are made up of billions of atoms. In some cases, the weak magnetic forces of individual atoms align and form a strong magnet. These substances form permanent magnets.

However, in most cases, the magnetic fields cancel out each other, and the substance as a whole is non-magnetic.  There are some materials in which the fields of individual atoms align to pass an electric current through them. Such substances are called ferromagnetic substances or electromagnets.

Since magnets are used in multiple applications, introducing them to students is quite important. However, due to their abstract nature, students find them hard to understand.

Read on to learn five ways through which you can make the study of magnetic fields an approachable topic for students.

3 Reasons Why the Concept of Magnetic Fields can be Tricky

Physics is an interesting field of the physical sciences. However, some concepts, like that of magnetic fields, can be a little challenging for students. Here are three reasons why students find it hard.

Moreover, on paper, the magnetic field is shown by dots and cross signs. For beginners, visualizing this field with such conventions can be tricky.

2. The Interaction of Magnetic Fields is Complex

Analyzing the magnetic field from a single source may be somewhat understandable. However, when magnetic fields interact, things become more complex since at points the fields add up, and at some points they cancel out each other. This thing is even tough for some educators to explain.

Most educators mention that a magnetic field exists around a moving charged particle. This information may provide information about the basics of magnetic fields. However, they are more interested in knowing real-life applications.

Most of the time, educators miss this out. As a result, students find it hard to take an interest in the topic since they don’t find its relevance practically.

5 Ways to Get Students Energized About Magnetic Fields

Some concepts, like magnetic fields, can be a little boring and abstract. To make them more interesting and exciting, tell a story about the scientist who discovered this concept. Stories not only excite students but also give them a way to remember topics. In this case, you can mention the stories of people behind Magnetic Fields.

The history of magnetism traces back to the sixteenth century. William Gilbert, a court physician to Queen, stated the electric nature of a substance. He gave the idea of static electricity and how objects get charged. He also studied magnetism and was the first to explain that Earth is a weak magnet and why a compass needle pointed North.

Then later in the 19th century, Hans Christian Oersted explained the connection between electricity and magnetism. He proved through his experiment that as the electric current passes through a conducting wire, a magnetic field is created around that wire, and this was confirmed by the deflection of the compass needle.

A few years later, a British Physicist, Michael Faraday, introduced the concept of magnetic field lines. He suggested that the magnetic field around an object can be shown with imaginary lines. These lines would help identify the strength of the magnetic field and make it easy for researchers to study the interaction of multiple magnetic fields. His biggest achievement in the field of electromagnetism was the invention of an electric motor. It was the first working application of electricity, in which electrical energy was converted into mechanical energy with the help of magnetism.

3. Use Visuals to Show Them Magnetic Fields

When starting any topic, explaining the basic pre-requisite concepts surrounding it is best. Although some of the students may know them, telling them again gives them a fresh start and clears off any misconceptions they might have.

In this case, you can start with the origin of the magnetic field and how its represented using imaginary magnetic field lines. Then, mention the types of magnets that we encounter.

Since magnetic field lines are imaginary and have no physical existence; they just represent the strength of magnetic force around a magnet. One way is to draw these fields with lines and show them to students. This is the common practice used by most teachers.

However, to make things more exciting, you can use animations to show the magnetic fields, and how a magnet attracts any other object in its range. Moreover, the interaction of multiple magnetic fields can easily be shown to students using this technique. 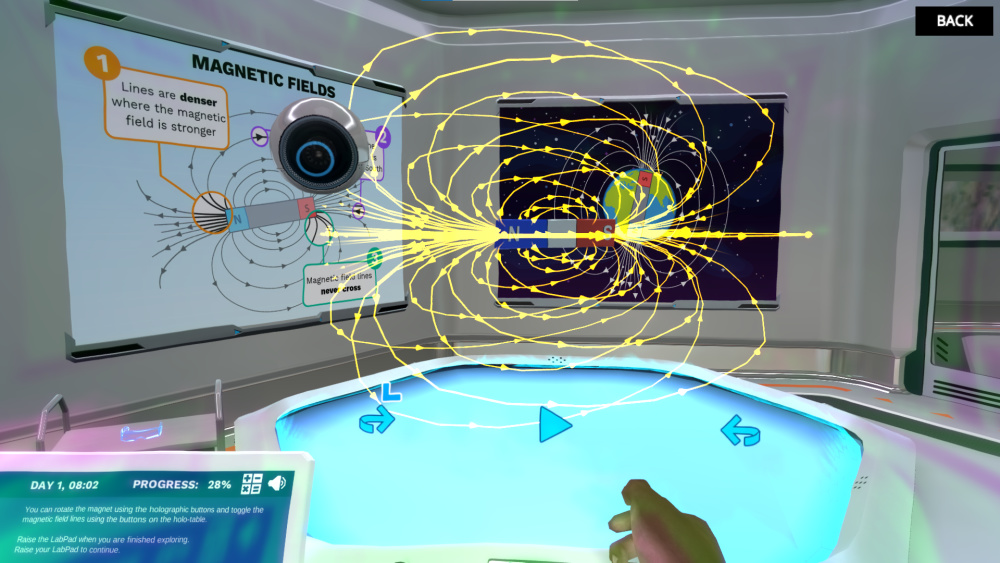 It’s a  figure for Labster’s simulation on Magnetic Fields. It shows a 3D visual of the magnetic field lines of an ordinary bar magnet.

4. Relate it to the Real World: Cite Applications

Physics is all about the working principles of phenomena happening around us. So, when teaching, you must link your topic with its practical application. These applications energize students and give them the motivation to learn about the topic.

Luckily, magnets have various applications in our daily lives. These are some of the common applications of magnets you can cite during teaching.

Physics is learning and trying out things with multiple experiments. One way is to carry out experiments to study the behavior of magnetic fields. For that, you will need high-end labs and apparatus.  The modern approach is to use virtual lab simulations. With simulations, students can experience the same as when doing physical experiments. Moreover, with simulations, they can get to see phenomena that may not be feasible to show experimentally.

Here, Labster can help you greatly. At Labster, we are committed to delivering engaging simulations that are narrated in the form of stories that are set in a virtual world. With multiple games within the simulations, students learn and enjoy simultaneously.

You can check out our simulation on Magnetic fields, where students learn about magnetic fields through a puzzle. They unlock the lab room using magnets and visually see magnets in action.

Contact us now to get a Labster High School simulation package for your students.