TLC is used in several domains like in qualitative testing and separation of pharmaceutical drugs, biochemical analyses of plant and bodily metabolites, identification of natural products, and purification and detection of adulteration in commercially important commodities ranging from those in the food industry to the cosmetic industry. With such widespread usage, TLC enjoys a good repo in both academic research and industry.

Since TLC works at the core of chemistry, developing a deeper understanding of the concepts like stationary phase, mobile phase, volatile and non-volatile mediums, determination of Rf factors, etc can help the biologists in interlinking the two subjects. In the absence of such an interdisciplinary approach, delivering a lecture won’t be promising. It might end up being another cramming session for your students.

For teachers explaining TLC in their classes, this article can provide real help as it highlights the blocks encountered by students and lists practical solutions to resolve them. By the end, we’ll share why a virtual lab simulation will prove useful not only for your students but also for you as an educator to deliver concepts more efficiently.

Figure: A GIF from TLC (Thin Layer Chromatography) simulation by Labster. It is available for University / College classes.

3 reasons why TLC can be tricky to teach or learn

There are 3 reasons why students dread and confuse the topic of the TLC separation technique. Acknowledging these blocks is the first step toward making the topic more approachable.

It is one of the most common reasons that teachers delivering lessons about separation techniques are oblivious of. The majority of the students learning biology can fear chemical sciences. Since analytical techniques like TLC and even other chromatographic techniques work at the junction of different chemistry concepts, biology students can be unnerved at the mere introduction of these concepts.

2. Lack of both practical handling and visualization.

Students at the high school and university level aren’t usually provided with enough lab handling practice. Due to the limited availability of funds or consumables, experiments like these are usually either demonstrated by educators themselves in labs or conducted in groups. Under such a condition, it comes as a passive acquisition of the technique where students don’t know how to load the sample with a capillary tube, how cautiously one should handle the TLC plate, or why the loading spot shouldn’t be immersed in the mobile phase. Students often miss the point of using a pencil to mark the sample loading site instead of an ink pen (as it would mix and mislead the results of the separation technique due to ink loading). There are several such small details that are only understood and acquired when a student handles the TLC plate themselves.

Additionally, the deficiency of any video demonstrations of the TLC also shuns any possibility of learning these minute details and tricks in a more interactive manner. No wonder why theoretical lessons on TLC can become non-conductive.

3. Finding it useless in the real world.

Students are often expected to learn techniques and methods in science in an uninformed position about their utilities in the real world. The scenario is the same for TLC.

The demonstration or group experiment on TLC usually uses the blood serum or plant extract in the labs. Though loading the samples and visualizing the separation, it is fascinating for most students, the idea and principles of the technique fade away after the lab session as the students aren’t given the proper take-home message.

5 ways to make TLC a more approachable topic to understand

In order to address the blockades encountered while teaching the TLC technique, educators can engage the under-listed solutions in their classes. These can clarify many instrumental aspects of TLC. Not only can they make teaching easier for educators like you but will also make lessons clearer and easier to assimilate for your students.

1. Drive out the fear of chemistry

Since TLC involves terminologies and concepts that can be overwhelming at first, easing out their meanings for your students can serve the purpose of slashing out the fear of chemistry. We list a few tips and tricks that you can put to use in your next class.

1. Explaining the basic principle behind TLC: The separation principle of TLC works based on the ‘differences in the nature of stationary and mobile phases’. The individual components of the sample mixture that we load for separation have an overall nature; either aligning with the mobile phase or the stationary phase.  There is an active competition going on between the 2 phases for the loaded samples. While the stationary phase (silica) tries to restrain the components of the compound from moving and subsequently separating, the mobile phase (solvent) tries to separate and move them. As per the differential polarities/nature of the individual components of the loaded mixture, they move different lengths of distances.

Example: You can explain it using the example of different components of the leaf pigments extraction (chlorophyll A, B, carotenes, xanthophylls, etc). Since each of these components has a distinct polarity, they will move different lengths of distances on the TLC plate.

The group will separate in the adventure park based on the ratio of these 2 features. A similar ratio (Rf=Retention Factor) is calculated for the individual components in the TLC run. You will see the most adventurous friend riding most of the adventurous rides (MOST MOBILE) while you’ll see a range of friends being moderately adventurous and not taking all the rides. And you’ll also witness the less adventurous friends enjoying the least number of rides. (MOST STATIONERY).

Just like this group of friends separated in a well-dispersed manner based on their differential drive for adventure, the components of the mixture separate on the TLC plate based on the differential nature of polarity.

Using such examples, educators can make room for core concepts in their students’ memory. 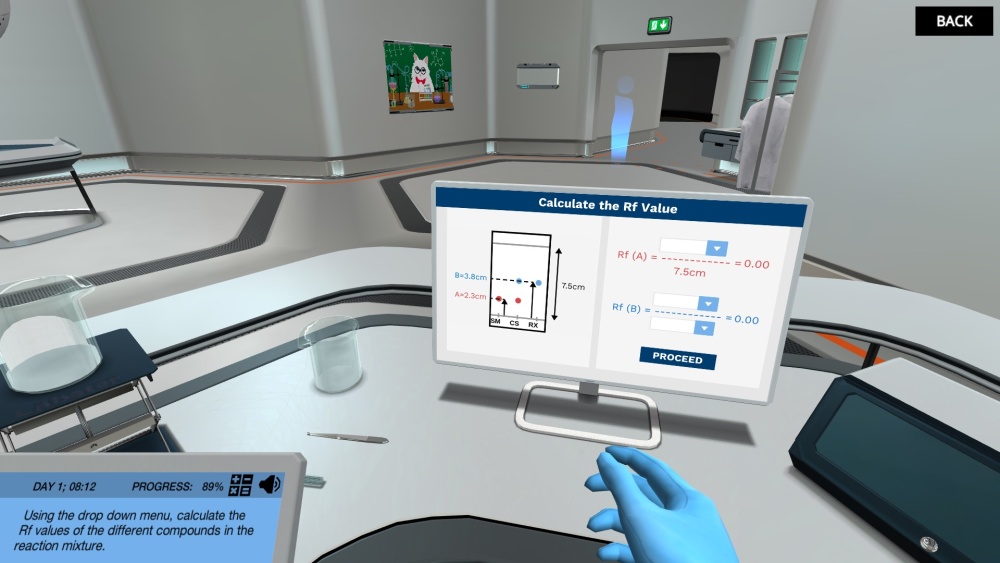 Figure: A snippet from TLC (Thin Layer Chromatography) simulation by Labster’s virtual laboratory shows how the Rf calculation is performed. It is available for University / College classes.

2. Reason out the intricacies of each step of TLC

TLC involves several intricately detailed steps, which if wrongly performed, can result in erroneous experimental results. Because of this reason, a lot of care is demanded by performing each step. In order to make your students meticulous about all these details, explain the reason for these steps.

Similarly, try to explain the reasons behind each of the intricacies involved in TLC handling. This can make your student understand how research work demands unwavering attention and dedication and prepares the next generation of scientists for STEM research. 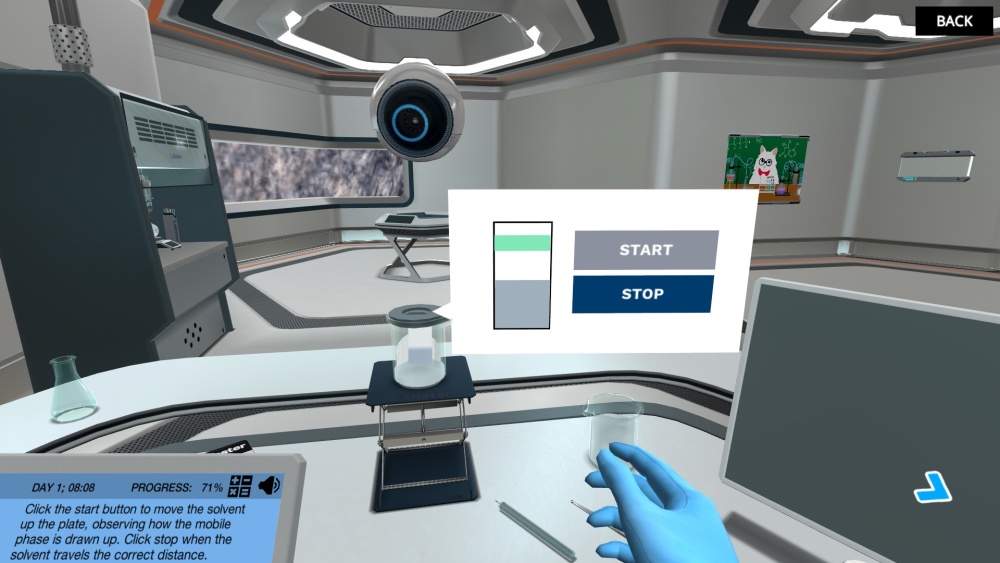 Figure: A snippet from TLC (Thin Layer Chromatography) simulation by Labster shows how the mobile phase moves up the stationary phase. It is available for University / College classes.

Since TLC or any other technique for that matter is best taught by the physical involvement of students in the class, educators and teachers can try to approach Sci-tech-based companies to source some extra consumables from them. Usually, the industry waste (obviously check for hazards) can be recycled and used for lab demonstrations. Since schools and colleges aren’t funded as well as industries, building collaboration with industries can help the former in a very big way.

If the lab handling is still compromised, educators can opt for interactive YouTube videos if available. The real-time run of TLC can make the topic intriguing and interactive for classroom teaching. Alternatively, educators can use the TLC (Thin Layer Chromatography) simulation provided by Labster. 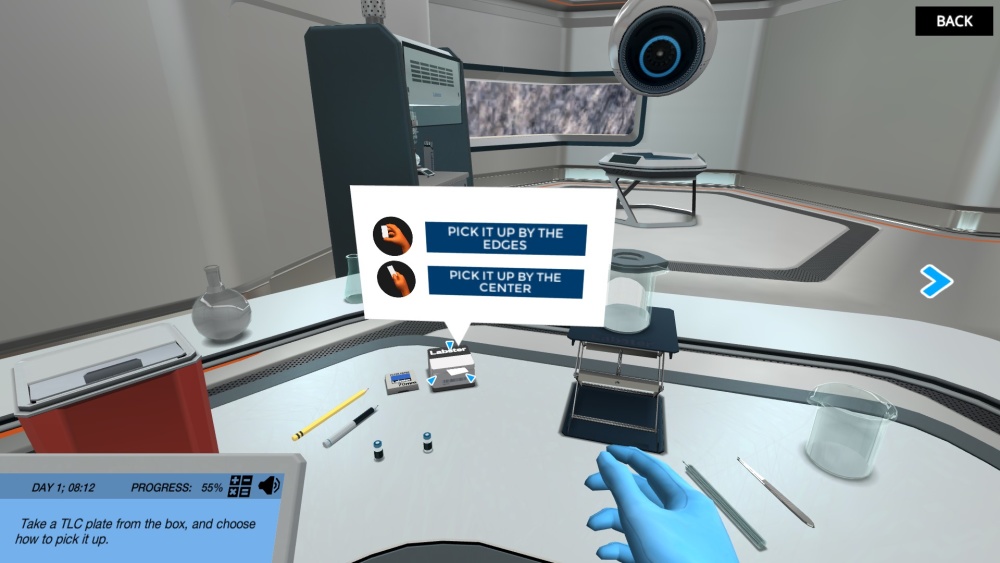 Figure: A snippet from TLC (Thin Layer Chromatography) simulation by Labster. It compensates for the lack of lab handling as your students can interactively learn the technique. It is available for University / College classes.

4. Engage them with the stories of scientists behind the technique development

People in general, engage more with things when they feel a ‘connection’. The air of being supreme is usually associated with discoverers and inventors. This makes the students feel that the science they practice in classrooms is inferior or useless. Telling stories about the discoverers and inventors that humanize their lives and scientific journeys can help your students in becoming more motivated to learn the subjects. You can here engage the story of TLC’s inventor.

Example: The scientist who developed the idea of TLC has such a life story; Nikolai Izmailov. Izmailov, while searching for new methods to study pharmaceutical analysis, came up with the idea of the “drop-chromatographic method” in 1938. This later came to be known as “thin-layer chromatography”.

Izmailov had a childhood full of hardships since his dad died when he was only 2. This self-made man not only endured hardships in his early life while sustaining his family but also suffered in his later life due to the outbreak of World War II which halted his research work. But as self-made men are, he never compromised his Science. Even during WW II, he contributed a lot to the needs of defense services with the aid of his scientific tools. Meanwhile, he invented the technique of TLC that finds abundant utility across the world today!

Since TLC can be too theoretical in absence of lab handling sessions, educators are advised to search for visually interactive videos. YouTube doesn’t always provide such an option for all the topics. In order to overcome this visualization constraint in the learning process of the students, virtual laboratory simulations from Labster provide teachers with an option to use TLC (Thin Layer Chromatography) simulation. This can help in making more insightful points as students are rendered with better visual options. Your students don’t have to struggle to imagine different steps of TLC themselves as our interactive TLC simulation along with gamification elements comes to the rescue. By using this way of active and immersive teaching, our virtual learning platform takes an advent in the field of Science to make the upcoming scientists thorough with the “basics of their respective subjects”.

You can learn more about the TLC (Thin Layer Chromatography) simulation here or get in touch to find out how you can start using virtual labs with your students. 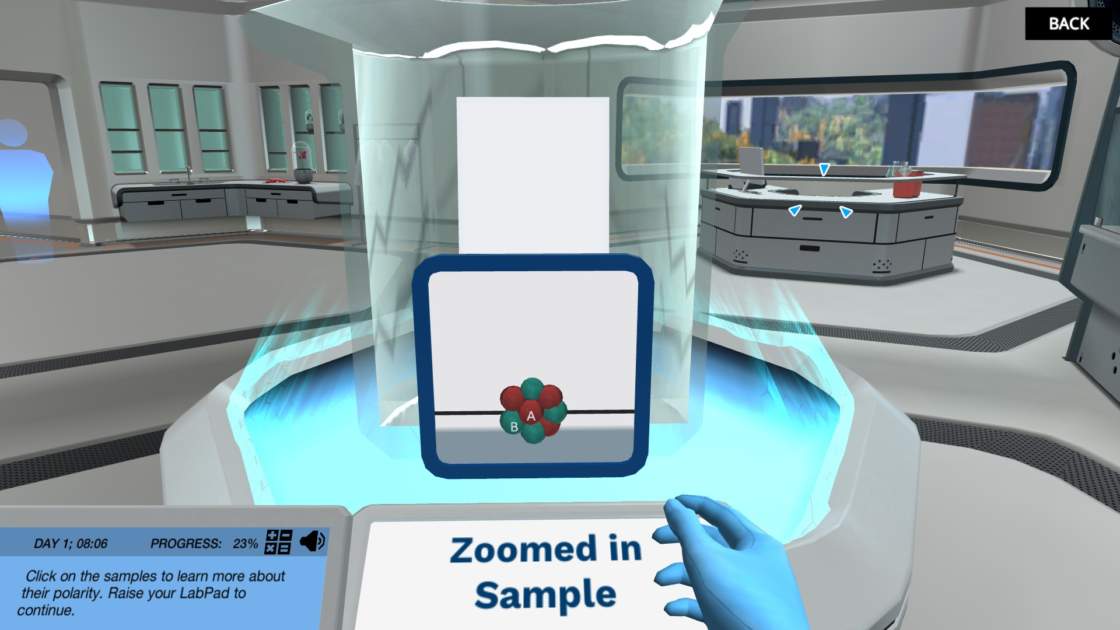 Figure: A snippet from TLC (Thin Layer Chromatography) simulation by Labster. It is available for University / College classes.