5 Ways To Get Students Energized About Viral Gene Therapy

Gene therapy is an experimental technique for treating disease by altering a patient's genetic material. Most commonly, gene therapy works by inserting a healthy copy of a defective gene ( also called the therapeutic gene) into the patient's cells. In gene therapy, viral and non-viral vectors are used to deliver therapeutic genes to patient cells. Therapeutic genes are used in gene therapy as functional copies of disease-causing genes. They are delivered as nucleic acid polymers (RNA or DNA) that replace mutated or missing genes in treated patients. Various vectors carry therapeutic genes and deliver them into patient cells. Viral vectors are the most commonly used, but non-viral methods such as naked DNA injection or DNA complexing also exist.

Read on to know why this can be a frustrating subject for teachers and students, five ideas for changing this outcome, and thoughts on why virtual labs can make things better.

Why Viral Gene Therapy Can Be Tricky

Three (3) reasons specifically why viral gene therapy can be difficult for even the most diligent of students.

Since viral genetic therapy occurs at the molecular level, you can’t see or feel it. Not being able to visualize the procedure, and not observing its relevance to the real world can make studying it demoralizing, and make it tough for students to stay excited.

Viruses are ideal tools for transporting nucleic acids because they have naturally evolved to transport their genetic material into cells for replication. Some viruses, such as retroviruses, even insert their genes into the host cell genome. To ensure the safety of the viral vector, either the entire viral genome is replaced with a therapeutic gene or the disease-causing part is removed from the viral vector. Several types of virus vectors exist, namely: 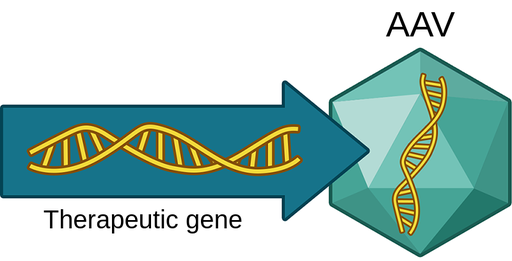 The challenge in developing gene therapy approaches using viral vectors is the specific targeting of the vector to tissues in the body, because off-target vectors have the potential to cause serious side effects. One possibility is to manipulate viral surface proteins to specifically bind to cellular receptors that are only expressed in target tissues. This approach is also known as pseudotyping. In addition, some viral vectors are known to naturally infect certain tissues, e.g. Adeno-Associated Virus (AAV) 2, which is a natural tropism for skeletal muscle, neurons, vascular smooth muscle, and liver cells.

Finally, gene therapy drugs can be injected or administered intravenously to ensure that certain tissues in the body are targeted. Another level of specificity can be achieved further by expressing therapeutic genes from tissue-specific promoters.

Adeno-Associated Virus (AAV) is a small, single-stranded DNA virus belonging to the family Parvoviridae. AAV infects humans and other primates; However, it is not known to cause disease. The lack of pathogenicity makes AAV attractive for its application as a viral vector for gene therapy.

AAV is characterized by an icosahedral capsid and a genome size of 4.7 kb. The genome contains two open read frames encoding rep and stamp. Rep consists of four genes that code for viral proteins required for replication. The cap contains VP1, VP2, and VP3 which together form the viral capsid.

The therapeutic gene of interest cDNA is inserted between two inverted terminal repeats (ITRs) that aid in the packaging of the viral genome into the viral capsid. After infection with recombinant AAV, the introduced therapeutic gene is not integrated into the host genome but remains in the nucleus as an episomal linker. Therefore, AAV DNA is lost during cell division because episomal DNA is not replicated. Compared to other viral vectors, AAV has a rather low cloning capacity and requires a complete 4.7 kb genome replacement. This allows the entry of only a small therapeutic gene. The application of AAV as a viral vector for gene therapy is limited by the fact that some patients have been inadvertently infected with AAV and therefore have produced neutralizing antibodies against the virus, thereby reducing the effectiveness of the treatment.

With these facts in mind, here are five things you can integrate into viral gene therapy to make it convenient and fun to teach your students.

The first attempt to modify human DNA was made by Martin Klein in 1980, but the first successful human nuclear gene transfer approved by the National Institutes of Health was made in May 1989. The first application of viral gene transfer therapy, as well as the first direct insertion of human DNA into the nuclear genome, was carried out by William French Anderson in experiments that began in September 1990. It is believed to cure many genetic diseases over time.

The first gene therapy studies began in 1990. A four-year-old girl named Ashanti DeSilva was treated for 12 days for a rare genetic disorder known as severe combined immune deficiency. DeSilva lacks a key enzyme called adenosine deaminase (ADA) that cripples her immune system and puts her at constant risk of catching infections that could kill her. The viral vector was used to introduce functional copies of the gene encoding the ADA enzyme into DeSilva immune cells. This improves the functioning of her immune system and allows her to lead a normal life without having to be isolated to avoid infection. The success of the DeSilva case was an important milestone, and many other studies were launched with enthusiasm in the 1990s.

There are several systems for producing recombinant adeno-associated viruses (AAV). The most common system is based on co-transfection with 3 plasmids from HEK293 cells as a packaging cell line. After lipid-based transfection, cells were harvested by lysis and the virus was purified for target cell infection. 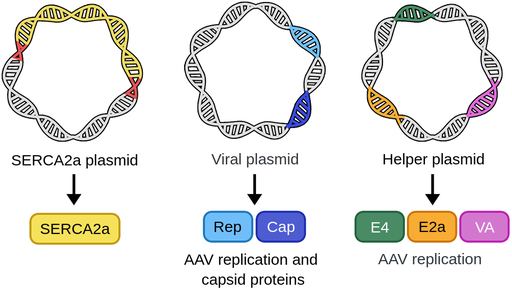 Figure 3: Plasmids required for AAV production. The viral plasmid encodes a replication protein (Rep) and a capsid (Cap). Helper plasmids encode major factors E4, E2a, and VA. Without these factors, there would be no replication. Finally, the third plasmid was co-transfected with the therapeutic gene cDNA ( shown here in yellow). 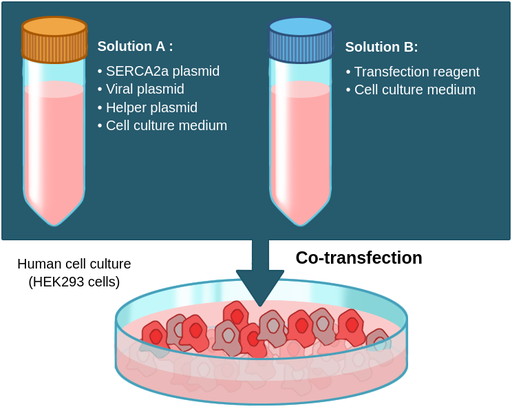 Animal models are used in research to perform experiments that would otherwise be impossible; for example, due to time constraints in developmental studies, or for ethical reasons in the study of human disease. The results were then extrapolated to humans. The criteria for selecting an animal model depend on the purpose of the study, but one of the most important considerations is the extent to which the processes studied are conserved in humans. Therefore, the similarity of animal models is very important when trying to apply experimental conclusions to humans. The animal models that are most often used in research are mice and rats. The main disadvantage of this approach is the need to maintain expensive animal facilities. Research centers usually have common services that are shared by all research groups.

Knock-out mice are laboratory mice in which researchers have disabled, or " turned off" existing genes by replacing them with artificial DNA pieces or destroying them. The loss of gene activity often leads to changes in the phenotype of mice, which include appearance, behavior, and other physical and biochemical characteristics. Removing the activity of a gene provides valuable clues about what that gene normally does. Humans share many genes with mice. Therefore, observing the characteristics of knockout mice provides researchers with information that can be used to better understand how the same genes can cause or contribute to disease in humans. Examples of research where knockout mice have been useful include studying and modeling various types of cancer, obesity, heart disease, diabetes, arthritis, substance abuse, anxiety, aging, and Parkinson's disease. Knockout mice also provide a biological context for developing and testing drugs and other therapies. 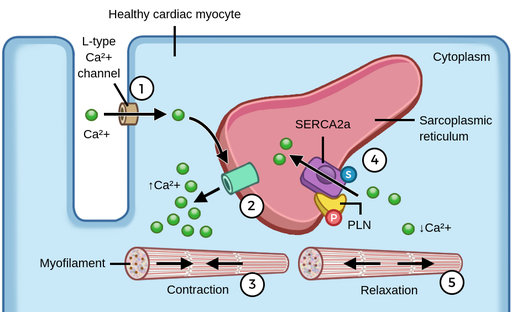 Figure 6: Schematic representation of SERCA2a function in healthy myocardial cells. During diastole, Ca2+ enters the cell (1) and triggers the release of large amounts of Ca2+ from the sarcoplasmic reticulum (SR) (2). This causes the myofilaments to contract (3). Simultaneously, SERCA2a is released from the inhibitor PLN and transports CaCa2+] back to the SR (4), allowing the myofilaments to relax (5).

SERCA, or sarco/endoplasmic reticulum Ca2+-ATPase, is a P-ATPase of the calcium type ATPase. It is located on the sarcoplasmic reticulum (SR) in myocytes (see Figure 6) and regulates Ca2+ reuptake in the SR. In this way, it regulates the contractile properties of muscle cells. There are three main paralogues:

SERCA2a was found to specifically regulate Ca2+ cycling in cardiomyocytes, specifically Ca2+ removal, which induces myocardial relaxation. Therefore, SERCA2a is considered an important factor in the development of heart failure

The ejection fraction (EF) describes the amount of blood pumped out of the ventricles with each contraction of the heart. The resulting percentage indicates impaired cardiac activity and helps diagnose heart failure or other types of heart disease. See Figure 7 to see how EF is calculated. The normal EF value for a healthy heart is 50 to 75%.

Heart failure, sometimes called congestive heart failure, describes a condition in which the heart cannot pump enough blood to meet the body's needs. In particular, in patients with heart failure, the walls of the heart or myocardium are enlarged. Heart failure is a deadly disease and the leading cause of hospitalization for people over the age of 65. Causes of heart failure include coronary artery disease, high blood pressure, heart attack, or conditions that put a strain on the heart. Typical symptoms of heart failure include shortness of breath, fluid buildup (eg, swollen ankles, legs, abdomen), decreased exercise capacity, weakness and fatigue, and a fast or irregular heartbeat. Additionally, heart failure can be triggered by physical exertion, when the heart experiences a lot of activity.

Conventional treatments include ACE inhibitors, beta-blockers, diuretics, and angiotensin II receptor blockers (ARBs). However, most common medications have strong side effects and many patients still have a short life expectancy despite treatment.

Viral gene therapy is a broad and complex aspect of science. The following memory aids can help students save time and clear up ambiguities, or better yet, encourage them to create their own. A mnemonic for the different types of virus vectors is "HAVe Right'' where lowercase letters are excluded and 'A' stands for two virus vectors.

A unique way to teach viral gene therapy is through virtual laboratory simulations. At Labster, we are dedicated to providing fully interactive state-of-the-art lab simulations that use gamified elements such as storytelling and scoring systems in an immersive, 3D world.

Explore Labster's Viral gene therapy simulation, which empowers students to learn through active inquiry-based learning. In the simulation, students embark on a mission to help some street basketball players understand how birth defects can be corrected using viral gene therapy.

Learn more about simulated viral gene therapy here or contact us to find out how you can use virtual laboratories with your students.