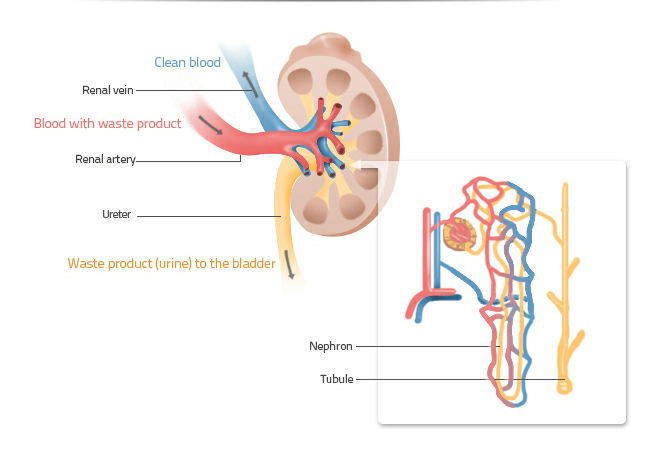 Renal physiology is the science of the kidney. It covers all the functions of the kidney, including filtering waste products from the bloodstream and recycling nutrients and ions. In addition, the kidneys play an important role in regulating blood pressure, electrolyte balance, and red blood cell production.

The kidney structure is complex and multilayered, and its functional unit is called the nephron. This is achieved when oxygenated blood enters the kidneys through the renal arteries and then flows through the nephrons, where waste products and excess water are filtered from the bloodstream and sent to the ureters and eventually the bladder. Thus, in humans, the kidneys process up to 180 liters per day, with most of the filtrate being reabsorbed into the bloodstream, resulting in an average typical urine volume of only 3- 5 liters per day.

The kidney has a characteristic structure whose primary filter is a nephron located in the medulla and cortex of the inner tissue. In the outer layer we have:

The internal and functional network consists of:

Finally, in the concave area of ​​the kidney, there is the hilum where the arteries, veins, and ureters join into the kidney tissue.

Find out why this can be a frustrating topic for teachers and students, five suggestions for changing it, and ideas for why a virtual lab can make things easier.

Why Can Kidney Physiology Be Difficult?

There are three distinct explanations for why kidney physiology can be hard for even the most energetic student.

We teach students about the renal system and its primary function of removing bodily waste from the blood. However, they cannot see this process even if the kidney is dissected because the process takes place at the cellular level of our body. Everything seems like nonsense to the students. 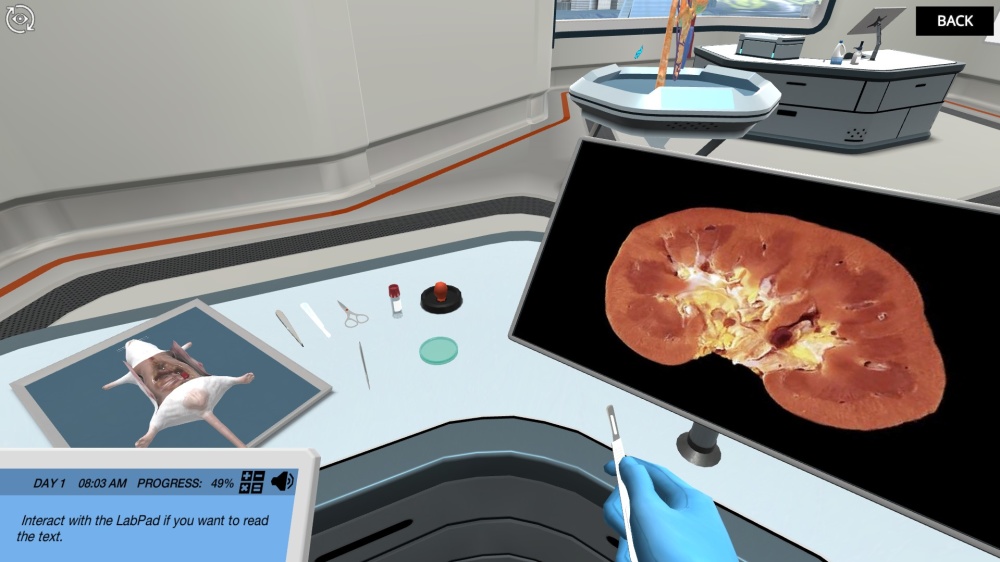 Figure 2: A snippet from the renal physiology simulation by Labster showing the kidney after a dissection. It is available for School and University/College classes.

Renal nephrons are the main structures that filter the bloodstream, recycling important molecules and ions before metabolites are excreted into the urinary tract. Renal nephrons are found in the medulla ( in the renal pyramids) and the cortical tissue of the kidney. It is estimated that one human kidney contains up to one million nephrons.

Structurally, the nephron is a long tubule, one end of which ends in a spherical shape called Bowman's capsule. The other end connects to the renal pelvis, which leads to the ureter. Going by the filtering, and recycling process, the structure is as follows:

Overall, the nephron is a highly efficient recycling station, retaining more than 90% of essential nutrients and ions, and water to, maintain homeostasis and help regulate body fluids.

The first stage of the filtration process in the kidney occurs in a structure known as the glomerulus, in the part of the nephron located in the cortex. Blood enters the tiny glomerular capillaries within Bowman's capsule from the afferent arteriole. Because the capillaries are squeezed between the two narrowed arterioles, strong hydrostatic pressure "pushes" water, ions, and other small molecules across the filter membrane into the nephron duct and further into the proximal tubule. It is a passive process in which the membrane acts as a special net to facilitate the filtration of metabolites in the bloodstream.

GFR depends primarily on the difference between external pressure ( pressure exerted by the beating heart and contracting arterioles) and internal pressure (hydrostatic pressure exerted by the tubules in Bowman's capsule). This difference is called the net filtration pressure. To measure the filtration rate, we can also use the creatinine loss in the bloodstream. Creatinine is a by-product of metabolic processes in muscles and is almost completely filtered into the urine by the kidneys. By measuring plasma and urine creatinine concentrations and urine volume, we can estimate the glomerular filtration rate. However, this is presumably because some creatinine is actively secreted into the nephrons and not as a result of passive glomerular filtration which contributes to the final concentration of creatinine in the excreted urine. 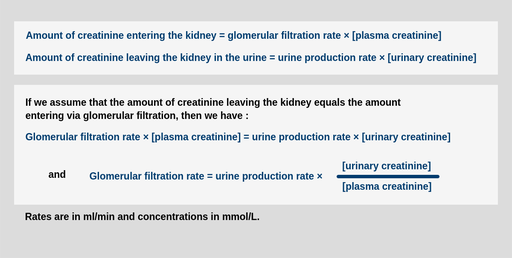 Now that you have the right foundation, let's review five ways to make kidney physiology class engaging, easy, and fun for you and your students.

Very little was known about renal physiology until the mid- 19th century. The turning point occurred in 1842 when the famous German physiologist and physician Karl Ludwig (1816-1895) proposed a theory of a two-step process (filtration and resorption) that lead to the excretion of urine. This document focuses on Ludwig and the time in which he lived. It also tells the story of the study of anatomy in the 17th century and the chemical approach to urine and kidney physiology in the 18th century that preceded Carl Ludwig's research. The theory of filtration and reabsorption contradicts another theory (the theory of secretion) which considers the kidneys to be glands, like the salivary glands. The origins of this theory go back to Marcello Malpighi (1628-1694) in the Renaissance but continued by William Bowman (1816-1892) and especially Rudolf Heidenhain (1834-1897) in the 19th century. Research in the 1920s and 1930s marked the end of the struggle between the two theories. It proved Ludwig right and posthumously gave him the recognition he deserved.

Here we will use the term antidiuretic hormone to summarize the two main hormones that can reduce urine production in the human kidney. The first is vasopressin, also called ADH (antidiuretic hormone), and the second is aldosterone. They have obvious medicinal importance because of their important role in regulating body water.

ADH is a peptide hormone produced in the hypothalamus that acts directly on the kidneys. At higher than normal blood flow osmolarities ( higher than normal concentrations of ions and metabolites), ADH is released from neurons and, upon reaching the renal nephrons, acts on the distal tubule to cause a higher rate of water reabsorption. The extra water retained in the blood dilutes the metabolites and lowers the osmolarity to normal levels, thereby maintaining homeostasis. The obvious side effect is a decrease in urinary volume excretion, hence the antidiuretic effect.

Aldosterone is also a hormone, this time it is produced in the adrenal glands above the kidneys and acts on the distal tubule in the nephron. Below normal blood pressure or an increase in plasma potassium concentration triggers the production and secretion of aldosterone, among other things. Aldosterone, in turn, stimulates the transmembrane Na+/K+ pump of cells lining the distal renal tubule, causing reabsorption of Na+ (and hence water) and excretion of K+. Reabsorption of Na+ and water causes an increase in blood volume and thus an increase in blood pressure and a decrease in the plasma potassium concentration to normal values. Aldosterone also regulates several other processes in the gut, saliva, and sweat glands related to K+ secretion.

Hypertension, also known as high or raised blood pressure, describes abnormally high blood pressure and is a physiological condition in which the walls of the arteries are constantly under pressure. The cause of high blood pressure remains unclear, but many factors have been found to worsen the condition or increase the likelihood of its occurrence. These factors are:

The medical standard for diagnosing hypertension is a blood pressure of 130/ 90 mmHg (systolic/diastolic) or higher outside of exercise compared to a normal value of 120/ 80 mmHg. When blood pressure reaches the level of 180/120, the condition becomes a hypertensive crisis and requires immediate treatment. Symptoms of high blood pressure are not always obvious and raised pressure can cause damage over a long time. Possible complications are:

There are various kinds of treatment depending on the severity of the disease and the combination with medications already being taken for other ailments. However, the most common high blood pressure medications can be broken down into 5 categories.

A good resource for memorizing high blood pressure medications is the ABCD, where "A" represents two categories of medications.

A unique way to teach renal physiology is through virtual lab simulations. At Labster, we are dedicated to providing fully interactive state-of-the-art lab simulations that use gamified elements such as storytelling and scoring systems in an immersive, 3D world.

Learn more about renal physiology simulations here or contact us to find out how you can use the virtual lab with your students.