5 Ways to Make the Food Web a More Approachable Topic

"No man is an island"; is a phrase that was coined from John Donne's Poem, in the 15th century. This idiom is so true that it doesn't only apply to men. It applies to plants, animals, man, woman, and every other creature in existence.

The idiomatic expression captures the whole concept of a Food web. It simply means that no creature can live independently of every other creature.

This can be explained by taking a look into the nutritional relationship that exists at tropic levels, and how a consumer becomes a producer to another specie.

For instance, a plant in the first trophic level synthesizes glucose through photosynthesis. The next organism in the chain (Herbivore) feeds on the glucose produced by plants, to generate its own energy. The heterotrophs generate energy by feeding on herbivores. The heterotrophs decay in turn becomes a source of energy for the saprophytes. All these nutritional relationships and the complex interconnections that exist between them are what make a food web.

In context, a Food web is a graphical representation of the complex feeding relationships that exist between species of organisms in an ecosystem. Unlike food chains, where the relationship exists only in a linear sequence, a food web represents the interconnections between food chains.

3 Reasons why Teaching the Food Web Might be Tricky

1. It is mutually inclusive with the food chain.

A food web can be likened to a mother set, having several food chains as its members.

No matter how simple, a food web cannot occur independently, except with the co-occurrence of many interlinked food chains.

For any student to comprehend fully what a food web is, he must have obtained a prior background knowledge of a food chain.

Likewise, a teacher who wants to effectively pass this information across would need to go the extra mile if they must get positive feedback from their students.

A Food web contains several interlinks between chains, with arrows pointing across different directions. These cycles are complex. lt can render a non-motivated student uninterested and easily daunted.

3. It requires a visual representation.

The Food web is in itself a "diagrammatic representation".

There is no easy way this concept can be grasped fully, without including a visual illustration. Similarly, it might be difficult for a visually impaired student to fully understand what it entails.

Imagine a scenario whereby a teacher intends to introduce the food web to his student for the first time, with the aim of explaining the nutritional interdependence between tropic levels in an ecosystem and the flow of energy biomass in the ecosystem.

If he takes the class in a virtual room using only texts and voice, it doesn't matter how well he tries to simplify it; the students will get disengaged. Textual information and audio discussions alone cannot portray the scope of a food web.

Find out how to manage a food web class by following through this  article.

5 Ways to Make the Foof Web a More Approachable Topic

Having understood the reasons why some students may find it difficult to understand the scope of the food web,  there is a need for the teacher to go the extra mile to effectively communicate this topic to all students, irrespective of their academic or learning prowess.

Here are five practices that can enhance food web comprehension

The importance of visuals in a food web class cannot be overemphasized. Without a pictorial or video graphic, the food web can sound as ambiguous as any other abstract topic.

Ordinarily, for an average student, the food web should be relatable and provoke some interest. However, even the smartest of students can run out of imaginative strength when the web starts getting complex.

According to a study review by Eliza Bobek et co. visual explanation improves cognition. The research was carried out to determine the role of visual communication in learning, and the results showed that visual explanation is the most effective method of teaching.

It is faster and more reliable as the student may never need to retake the class. Textual or audio description alone is not reliable because it is prone to error. Such error can either be on the part of the teacher or due to misinterpretation from the student’s end.

Other importance of visual learning include:

According to studies, the brain receives more visual impulses from the eyes than any other sense organ. This makes visual learning more reliable.

What visual methods can be adopted in this topic?

What class interaction does is that it encourages participation from students. A lot of students only attend classes without participating in any aspect of it. Some students do not participate because they don’t have confidence in their academic performance. For such students, educational activities excluding the regular long talks in class can drive their motivation.

Let’s see one of the possible ways to achieve this goal:

CLASS SHOULD BE SPLIT INTO SIZEABLE TEAMS OF ABOUT 3-5

IT SHOULD CAPTURE THE CONCEPT OF THE VARIOUS TYPES OF HETEROTROPHIC NUTRITION; ESPECIALLY HOLOZOIC ORGANISMS (OMNIVORES, CARNIVORES, AND HERBIVORES) AND SAPROPHYTIC NUTRITION.

MEMBERS OF TEAMS SHOULD BE CALLED RANDOMLY, TO GIVE A REVIEW OF THE LESSONS IN THE VIDEOS.

(Relate the food web to socialization and interdependence among humans)

A food web is one of the best ways to capture the ideology behind the effect of inter-relationships.

As earlier mentioned in the introductory paragraph, no man is an island. A Food web is the exact replication of that idiom, put into a pictorial illustration.

Plants, in the process of photosynthesis, utilize 3 compulsory elements: sunlight, water, and carbon dioxide to manufacture glucose and generate energy.

Even though plants are the first producers in the trophic levels, they do not produce without the contribution of their consumers (herbivores). The carbon dioxide the plants utilized for the photosynthesis process is obtained from the atmosphere, of which a major source is an animal exhalation.

This is where socialization and interdependence come into play. The plant depends on the animal, as much as the animal depends on it. At one point or the other, every man would need the help of another person. That is the law of nature.

The most fascinating story behind this is how the waste product released by one organism, becomes a useful resource to another. After the process of photosynthesis, plants release oxygen as a by-product. The oxygen released into the atmosphere is the most essential element for the existence of all aerobic organisms.

This can come in form of a class activity, assignment, or project. Students should be made to go through the process of drawing a food web.

According to research, drawing helps improve cognition and perception. It helps one to focus and grasp details that require concentration, it gives perspectives and boosts spatial memory. Little wonder students in preschool are brought up with drawing and coloring.

Aside from the cognitive importance, drawing is known to also have some psychological impact. It ameliorates the symptoms of anxiety and stress.

When students draw, they participate actively in their cognition-enhancing process. This goes a long way over mere visualizing or reading. It helps them figure out complex information more easily and also enhances retention for a longer time.

Advisably, this activity should be done as class work rather than an assignment. Teachers should see to it that all students partake in this illustration activity.

Grades should be awarded for the activity, in other to encourage the students to participate well.

If the task would be given as a group project, the teacher should assign a group leader, that would report the contribution of each member of the group.

Labster develops virtual laboratories and science simulations with the aim of training students in and outside the classroom. Some objectives of Labster simulations include:

When students watch simulations, it prepares them ahead of what they would meet in the lab. By so doing, they perform well in the lab and also finish on time.

Among the several hundreds of science simulations developed by Labster, are some dedicated to Food web training such as 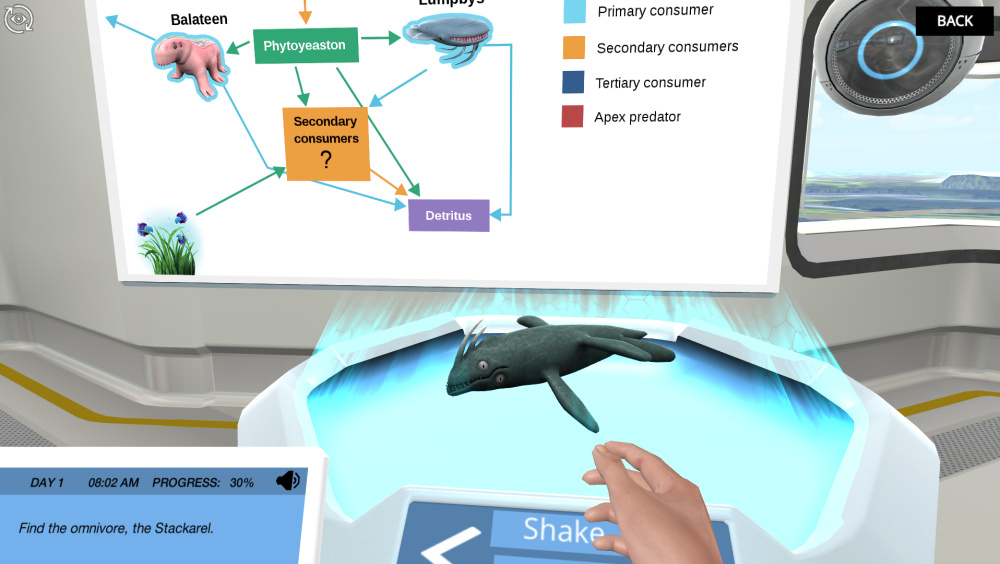 Food web simulation was designed with very relatable visual content. With this simulation, you can have an in-depth experience of the food chain, ecosystem, trophic cascades and primary production.

Get in touch to find out how you can start using virtual labs with your students.