MAGE, which stands for multiplex automated genome engineering, is a recombinant engineering technique that may be used for large-scale programming and can speed up the development of cells. Before George Church developed MAGE, researchers meticulously modified one gene at a time, observe the phenotypic changes, and began the process all over again. MAGE is a quick and effective, cost-effective, and extremely scalable system. In addition to this, it gives researchers the ability to modify particular or random places throughout the genome, and it also works constantly in-vivo. The portability of MAGE is MAGE's most significant drawback. It has only ever been utilized in E. coli. On the other hand, its application in Corynebacterium glutamicum was just recently described, which raises the prospect of expanding the range of compatible microorganisms.

MAGE enables the simultaneous modification of several different DNA regions. MAGE applies a collection of artificial single-stranded DNA (also known as oligos) to the bacterial chromosome to initiate the alteration. These oligos are electroporated into the bacterial cell. The phage recombinational protein, which is expressed in one of the plasmids used in MAGE, is used to integrate the oligo(s) into the bacterial genome. 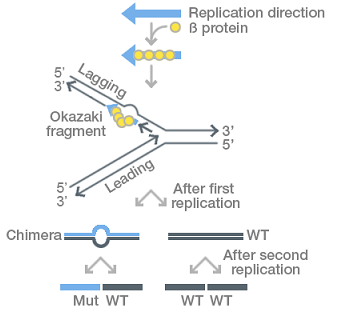 During the replication cycle, the oligo will anneal to the trailing strand of the chromosome of the bacterial cell. At the conclusion of the process of DNA replication, the mutation is introduced into one strand of the chromosome, which results in the creation of one chimera and one wild-type copy (WT). After one more cycle of DNA replication, we will have one completely mutant cell (Mut) and three cells of the wild-type genotype.

Identifying the target site in the replichore is the first step in the oligo design process for MAGE. It is necessary to take into account the strandedness of the oligo(s) throughout the design process to achieve the maximum possible allelic replacement frequency (ARF) when the oligo is annealed to the lagging strand. As a result, we need to build the oligo(s) sequence(s) in a manner that considers the target site's location. Once the target site has been identified in the replichore, the following basic guidelines for oligo design can be seen in the following:

Replichore 1 (+)  or Replichore 2 (-) strand. - The oligo sequence should be the reverse complement of the target sequence.

The workflow known as Multiplex Automated Genome Engineering (MAGE) is comprised of the following six steps:

2. Identify the target loci: Find all of the genes associated with the phenotype or genotype you want. There are a few different methods that, in order to assist in locating the necessary loci, make use of computer algorithms.

3. Design oligo: The mutation will be carried by the synthetic single-stranded DNA, also known as ssDNA, or by oligonucleotides, also known as oligo. To obtain a high allelic substitution frequency, it is necessary to construct these oligos with certain requirements in mind and make sure they are met.

5. MAGE cycling: MAGE cycles comprise a sequence of processes that make it possible for oligo(s) to recombine with the chromosome of bacterial cells.

6. Checking the Background: A screening is performed on bacterial cells to determine whether or not they have the phenotypic or genotype that is wanted. PCR-based approaches or DNA sequencing are utilized in the process of screening mutant cells when working on a project that is genotype-oriented. When it comes to phenotype-oriented projects, the screening process is carried out by plating colonies for additional morphology identification.

Why is Multiplex Automated Genomic Engineering (MAGE) a difficult topic?

Students will learn about the genetic building blocks of the human body, which are DNA and RNA, as well as how these two molecules work together. However, because the process takes place inside the cell, they cannot observe it. These connections cannot be seen with the naked eye. Thus, it is up to pupils to create their own mental images of how they could exist.

2. Reluctance to incorporate notions of computational biology into more conventional forms of study.

If a person cannot rationally organize, clean, process, and analyze data, there is no point in employing the MAGE technology to generate a great depth of knowledge because they will not benefit from it. Processing the gene mutations might be difficult for students using the standard computer systems that are often found on the campuses of schools and colleges. This is because the raw data is quite weighty. Because students typically have little to no background knowledge of the subjects at hand, teaching may be an extremely challenging endeavor for both students and teachers.

Because MAGE is the most sophisticated biotechnology, students could find it difficult to understand the notion. Most of the time, theoretical instruction illustrated with diagrams is used to discuss the topic of litmus testing, along with its numerous subtopics and the basic concept that underlies them. On the other hand, students often struggle to understand the importance of each step in the process. You must first have sufficient expertise in a number of different subjects before you can understand the MAGE technique to that level. You must do this in order to get ready for the following action.

Basic molecular biology and biotechnology concepts are often not understood by pupils. Before teaching students complex biochemistry and novel biotechnology concepts for MAGE, their fundamental principles must be established. While many ideas may appear simple to educators, they can occasionally be difficult for pupils to grasp. We include some of them here that typically annoy the largest group of pupils.

The toolbox for genome engineering has grown tremendously recently, enabling us to study how genes function in cellular networks and help produce excessive amounts of proteins, drugs, chemicals, and biofuels. Recent multiplex automated genome engineering (MAGE) advancements have increased the scientific community's interest in strain engineering. MAGE is a straightforward, quick, and effective method for genetic code assignment, non-natural amino acid integration, and simultaneous gene manipulation across several loci. MAGE can be extended further to the industrial-scale engineering of quick, hardy, and over-producing strains for pharmaceuticals, medicines, and biofuels.

3) Make it stick with word-play

A good mnemonic for remembering MAGE is a good way of attracting students. With the help of world play, students develop ideas simpler to them.

4) Tell them the pros and cons

Students get attracted to the topic when they know the pros and cons of the technique they are learning.

Pros: MAGE is affordable, quick and effective, and incredibly scalable. Additionally, it constantly runs in vivo and enables researchers to change particular or random places in the genome.

Cons: MAGE's main limitation consists of its portability. It has only ever been applied to E. coli. However, its application in Corynebacterium glutamicum has only recently been described, which raises the possibility of expanding the range of suitable microorganisms.

A fantastic technique to teach litmus testing is using a virtual laboratory simulation. At Labster, we're committed to providing a fully interactive advanced diagnostic simulation laboratory that uses gamification components like narrative and score systems inside a captivating 3D setting. After touring a full-scale sewage facility, you'll work on a litmus testing of carboxylic acids.