Stereochemistry has gained popularity in the field of chemistry. The reason behind this is that the toxicity and reactivity of molecules change by altering the stereochemistry. In our body, many reactions take place that are stereospecific. Stereospecific means that the receptor sites can accept only molecules with a specific spatial arrangement. 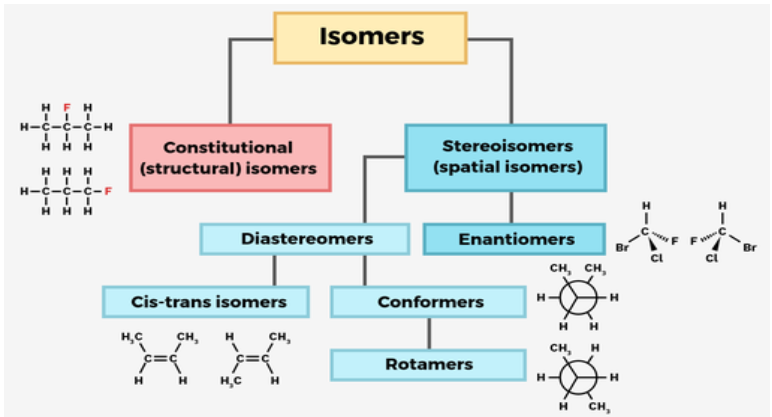 Figure: An image of classification of isomers from Labster theory of stereochemistry from stereocenters to E/Z isomers.

Why stereochemistry can be tricky to learn

There are three main reasons why stereochemistry from stereocenters to E/Z isomers is a difficult topic to understand, even for hardworking students.

Several subtract terms are used in stereochemistry. For instance, the molecules, isomers, reactions, and optical involvement all are abstract terms. It is difficult for students to remember the structures of different isomers from learning through textbooks. The reason is that students cannot see them with the naked eye due to the very small particle size. They need to imagine the structures when they read the topic from the textbook.

2. Too many structures of molecules

Since chemistry is a subject full of chemical reactions, it may be difficult for students to remember these reactions. There are several organic compounds that have isomers. The structures have some similarities and at the same time some differences. Students should be able to recognize and differentiate the structures of different isomers. Learning about stereochemistry can be complicated for students. They do not like this topic due to its complexities and also find this topic time-consuming.

5 ways to make stereochemistry a more approachable topic to understand

As you know the reasons that make stereochemistry a tough topic to understand, here are five ways to make this topic simpler for students to learn.

Louis Pasteur was a French chemist who played an important role in the field of stereochemistry. In 1848, he discovered the recognition of molecular chirality. He observed the group of compounds that were tartrates and also examined their chemical, crystallographic, and optical properties of it. He also resolved the problem related to the nature of tartaric acid. Pasteur observed that the molecules of tartaric acid have smaller faces. When examining those tartrates in the mixture of racemic mixtures, he noticed that half of the crystals were left-handed while others were right-handed. The left-handed molecules were levorotatory and the right-handed molecules were dextrorotatory. He also noticed that tartrate molecules were non-superimposable mirror image isomers. Pasteur was the first person who explained molecular chirality and the concept of isomerism.

2. Explains the basic types of stereochemistry

Diastereomers: When two isomers do not act as mirror images of each other, it is called diastereomers. These compounds have different physical properties and also chemical reactivity. In isomers, the diastereomers are more optically active, and they are not enantiomers.

Enantiomers: These isomers can give one pair of optical isomers, but the structure of enantiomers is not superimposable in mirror images. These are stable and isolable compounds that can exist in discrete pairs. The two enantiomers possess the same properties, but their interaction in a polarized light can be changed. Additionally, enantiomers are those isomers that are mirror images of each other. 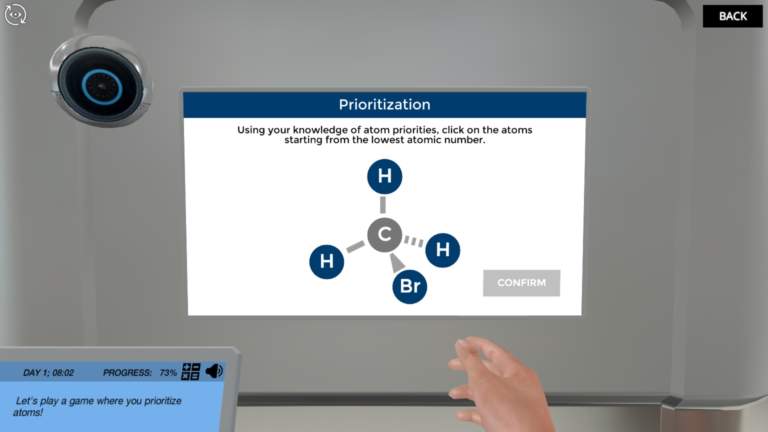 Figure: An image of prioritization from Labster virtual laboratory of stereochemistry from stereocenters to E/Z isomers.

Figure: An image of cis/trans isomers from Labster theory of stereochemistry.

Color diagrams play an effective role to understand difficult topics like stereochemistry. Visual learning can help to develop visual thinking in students. Learners can understand the topic more effectively when they see color images related to the topic. The diverse colors make stereochemistry easier and simpler for students to remember. In stereochemistry, students need to learn structures, their isomers, and the bonds between atoms. These can be easier to learn through color diagrams.

The color images presented below show the isomers of Limonene. Limonene has two enantiomers which are R-Limonene and S-Limonene. These two enantiomers have specific smells and flavors. Chiral and achiral are two main terms used in stereochemistry. The chiral is the non-superimposable mirror while achiral molecules are the superimposable mirror images of each other. Limonene is a chiral molecule. 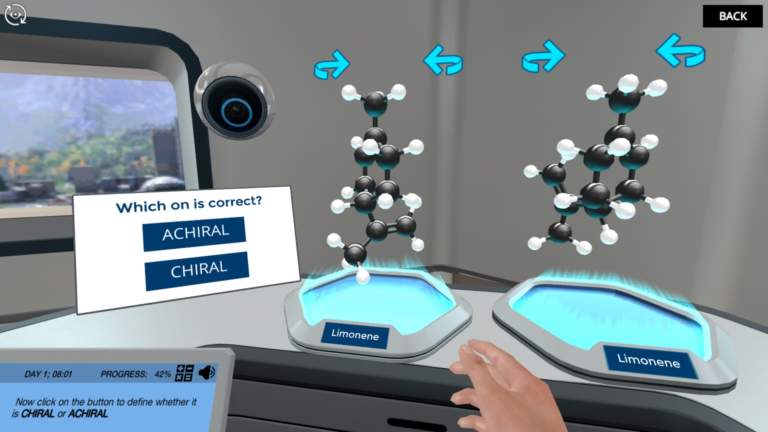 Figure: An image shows the 3D structures of isomers of Limonene from the Labster virtual laboratory of stereochemistry from stereocenters to E/Z isomers.

5. Use of virtual laboratory simulation

The virtual lab simulation is an effective method to explain tough topics like stereochemistry. It is helpful for teachers to convey the topic to their students. At Labster, we provide advanced 3D simulations that have gamification elements like storytelling and the scoring system.

Check out Labster's stereochemistry simulation here, or get in touch to find out how you can start using virtual lab simulation with your students.