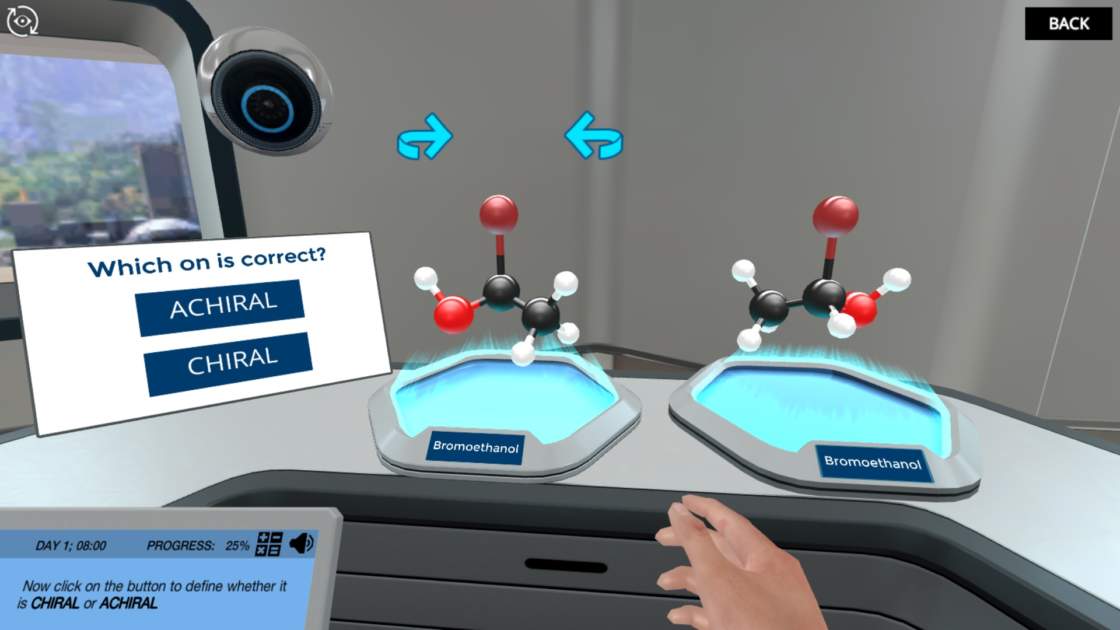 From 2D sketches to 3D molecules

In this simulation, you’ll first be guided through the theory behind isomers and chiral centers, just to make sure you are familiar with these topics. Then, our friendly Dr. One will move your attention to 3D structures of stereoisomers and will need your help to solve some tasks.  Here, you’ll be asked to recognize chiral and achiral molecules, rotate them and even break a couple of bonds (don’t worry, we have good insurance).

As you get used to the 3D visualization, the complexity of the molecules will increase, and your understanding will be tested through quizzes and tasks.

Prioritize the groups in different enantiomers

Once the concept of stereoisomerism has been introduced, you will learn how to assign the relative configuration of enantiomers through prioritization rules. This is fundamental to understanding R and S configurations and by looking at some artistic posters, we’ll be able to make it less tricky and a bit more intuitive.

Once you grasp the concept, Dr. One will test you using the 2D representation often used in the theory books, but we’ll add some feedback and animation depending on your answers.

The next step will be to distinguish between cis and trans isomers. To do so, a visual game on the main screen of the laboratory will suggest six different molecules, and you’ll decide whether they are cis or trans.

Finally, after an introduction to E and Z isomers, you’ll be asked to identify three new molecules before the final quiz.

Take a deep dive into the world of molecules: discover how they are structured and understand how their spatial arrangement can make all the difference in their physical and chemical properties.
Stereochemistry concerns the structure and shape of molecules in three dimensional space. The positions and connections of atoms in molecules can affect their properties, that’s why stereochemistry is crucial in the introduction to organic chemistry
However, using only your imagination to visualize these 3D structures can be tough, especially if you’ve just started your journey into this topic.

A million dollar lab in your browser

Our virtual laboratory simulations are aimed at university, college and high school level, within fields such as biology, biochemistry, genetics, biotechnology, chemistry, physics and more.

With access to our simulations, you will have hundreds of hours of engaging, high-quality learning content available to you.

We currently have 218 simulations that cover everything from biology and medicine to physics and chemistry.

Evolution: Journey of the canids

Wave Model of Light (Principles): Use reflection and refraction to take photos

Learn how you can use Labster in your science course