5 Ways to Make the Synthesis of Aspirin Interesting to Students

Salicylates are a class of drugs that includes aspirin. It accomplishes this by inhibiting the production of certain naturally occurring compounds responsible for symptoms such as fever, discomfort, edema, and blood clots. There are various formulations of aspirin that combine it with other drugs, such as antacids, pain relievers, and pharmaceuticals for treating coughs and colds. The esterification reaction with ethanoic anhydride is required to convert salicylic acid to acetylsalicylic acid, the primary component of the medicine that is more widely known as aspirin. This reaction takes place in laboratories and is typically performed for academic purposes.

The synthetic approach, when carried out, includes a step known as recrystallization, which aims to separate the product from any impurities that may have been present. To accomplish this separation, a solvent is selected that will dissolve the solid while it is hot but will not do so when it is cool. In order to complete the procedure, there are several processes involved:

First, using a tared scale, measure out one gram of salicylic acid and place it in a dry flask in the shape of a pear.

To prevent the reagents from spilling out, move the flask inside the fume hood and fasten it to a support suspended above a warm bath. The next step is to incorporate 2 milliliters of ethanoic anhydride, followed by adding 8 drops of phosphoric acid in concentrated form. To prevent the spread of fumes, the condenser should be installed. Activated charcoal can remove contaminants from a solution during the process of particular synthesis by being added to the mixture.

After placing the solution in the hot water bath and stirring it with the magnetic stirrer for the first 5 minutes, continue doing so for another 5 minutes after the solid has dissolved.

Take the flask out of the heated bath and carefully pour five milliliters of ice water into it. It is necessary to decrease the solution's temperature in two stages. The conical flask must first be chilled to room temperature before it can be placed in an ice bath for additional chilling. Once the flask has been cooled to room temperature, it can be placed in the ice bath. If the solution is immediately placed into an ice bath, the rapid freezing and production of crystals could entrap some of the impurities again in the crystals, resulting in a reduction in the effectiveness of the purifying process. 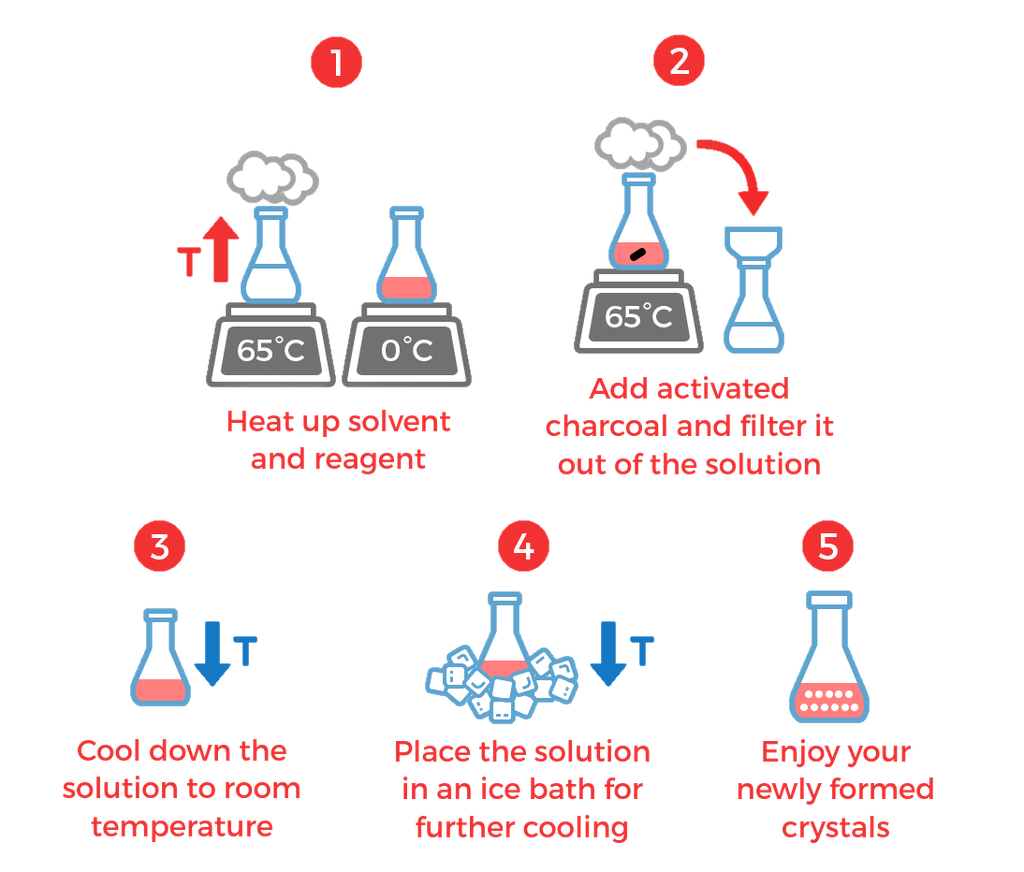 As per reports, between 10 and 18 percent of students globally experience migraines. According to a review published in November by The American Journal of Medicine, aspirin was shown to be an effective and safe treatment option for acute migraine headaches when administered in high doses ranging from 900 to 1300 mg. Additionally, further research showed that aspirin might effectively prevent recurrent migraine headaches when administered in doses ranging from 81 to 325 mg. As the authors point out, effective prescription drugs that have been shown to benefit patients can be used to treat acute migraines and prevent recurrent attacks. However, for patients who have high co-pays or who do not have health insurance, it is possible that these medications will not be available to them or that they will be too expensive for them to afford. It is estimated that 8.5% of people in the United States do not have health insurance, with Florida having one of the highest percentages at 13%.

Why is the Synthesis of aspirin a difficult topic for students?

1. Nature of the topic

For students, chemistry and chemical reaction are confusing and hard to learn. The idea of how a medicine forms via a chemical process may be overwhelming for them. Before moving to the practicals of making aspirin, they should have a clear knowledge of what is happening during the process. Because of the nature of the topic, it requires a combination of abstract thought, intensive research, and complex reactions. The majority of a chemical reaction constitutes a conglomeration of different elements' symbols and numbers, arrows, shapes, and lines. Chemistry applied to medicinal purposes is essentially its own language. Because it focuses so strongly on applying rules rather than memorizing material, it is consequently taught in a more mathematical fashion than literature. A significant portion of the information presented in organic chemistry is based on a technique known as "arrow pushing." This method of sketching molecular diagrams represents the flow of electrons during chemical reactions. It is impossible to remember how these arrows travel or the reasons for the behaviors of specific substances.

Chemistry students can predict reactions' results by basing their assumptions on how particular elements bond. The image of aspirin is far more difficult to conjure. One of the students mentioned how much she depends on physically interacting with the material she is learning. Drawing on principles learned in earlier chemistry courses, many students attempt to comprehend medicinal chemistry by employing mathematical modeling, elemental knowledge, and logical reasoning. However, many responses challenge previously held expectations of what ought to occur and instead take an unexpected turn.

Organic chemistry will appear to be an almost insurmountable task for pupils who cannot articulate how various elements interact with one another, how and why electrons form bonds, or how to design Lewis structures. Many college students find that it is simple to get behind in the subject of chemical reactions. Still, a lot of students believe that medicinal chemistry will be simpler in some way or that they will at least be able to review some of the challenging information from the classes they have taken previously. The reality is that there is a lot of content to cover in medicinal chemistry, and because of this, there is very little time left over to go over previously covered ground. The instructors will go directly into the new material, assuming that the pupils have a solid understanding of everything they have learned up until now.

Five ways to make a synthesis of aspirin interesting for students.

1. Teach them the history of aspirin

Aspirin is the drug that revolutionized modern medicine. Teach your students about its origin and history. Thomas Maclagan, a physician from Dundee, employed salicin as a treatment for patients who suffered from rheumatism. He published the salicin's positive benefits in The Lancet in 1876. In 1897, a German chemist named Felix Hoffman, who was employed by the Bayer business, successfully modified salicylic acid to produce acetylsalicylic acid, which was later given the name aspirin. After acetanilide's success a decade earlier, researchers at the Bayer company, which manufactured drugs and dyes, started looking into acetylated organic compounds in 1897 to see whether they could be used as potential new medications. By 1899, Bayer had developed acetylsalicylic acid, given the medication the brand name "Aspirin," and began marketing it internationally.

2. How does aspirin work biologically?

Teach them how aspirin goes into our body and does its work. When we relate it to the effects, students tend to learn quickly. The anti-inflammatory effects of aspirin are achieved through the inhibition of an enzyme that is responsible for the production of prostaglandins in the body. Prostaglandins are compounds that participate in a wide variety of physiological processes, including those related to pain and inflammation. Aspirin's ability to decrease pain and inflammation is due to its ability to inhibit this manufacturing pathway.

Aspirin is typically prescribed to patients who suffer from migraines that range from mild to moderate severity and do not cause them to get nauseated or vomit. This is because nausea and vomiting may prevent patients from properly absorbing the medicine. Antiemetics may be necessary for those who throw up during migraine attacks to ensure that their bodies can absorb other medications.

3. Side effects of aspirin on students

It is very important for students to learn about the side effect of any drug to avoid self-medication. Aspirin's most typical adverse effects include digestive discomfort bloating, and nausea. Less frequently, people may encounter asthma symptoms, worsening breathing difficulties, and tinnitus. Rarely, serious negative effects can include: ulcers, bleeding in the gut pronounced allergy responses.

Students will never understand the basis of aspirin processing if they have no idea about how it works. To give the visual aid, show them this graphical representation by Labster.

At Labster, we have virtual labs that help you and your students understand the process of aspirin synthesis and its properties. By using the gamification feature, you will be challenged to understand the correct reagents and products involved in the synthesis of aspirin.

Check out our Synthesis of Aspirin: How to fight students’ migraines Virtual Lab.