5 Ways to Teach Bromine Test For Unsaturated Bonds to Students

The bromine test is a qualitative test that is used to determine whether the substance in question has alkene or alkane, functional groups. In the absence of light, alkene groups combine with bromine water to produce an addition reaction, which ultimately results in a solution that has lost its coloring. On the other hand, alkane does not react with bromine water, which is evidenced by the fact that the coloring of the bromine water does not change. The bromine water test is most frequently performed on enols, aniline, alkenes, glucose, phenols, and acetyl group chemicals. In addition, the test can determine whether or not the substance in question contains an aldehyde group.

The water containing bromine goes from having a yellowish hue to being completely colorless as the process progresses. The bromine test is used to determine whether or not a carbon-carbon bond is unsaturated, such as in the case of an alkene or an alkyne. An addition reaction, which is a sort of chemical reaction, is used in the test. In this reaction, a reactant, in this case, bromine, is introduced to an organic compound to break the double or triple bond. One such would be the introduction of bromine to but-2-ene:

When bromine is dissolved in water, it takes on a hue that is somewhere between orange and brown. Because of this, the color of the solution changes when an alkene or alkyne is present for the bromine to react with. Because alkanes only have a single bond, bromine is unable to react with them; as a result, there is no change in color when these two types of compounds are combined. However, bromine will react with aromatics such as phenol. In the presence of catalysts, benzene is able to react with bromine; however, this is not possible in the absence of a catalyst since benzene is not reactive enough. Because phenol is much more reactive than benzene, it is capable of reacting with bromine even in the absence of a catalyst. Because of this, the electron density of the delocalized benzene ring is increased by the contribution of the alcohol group. 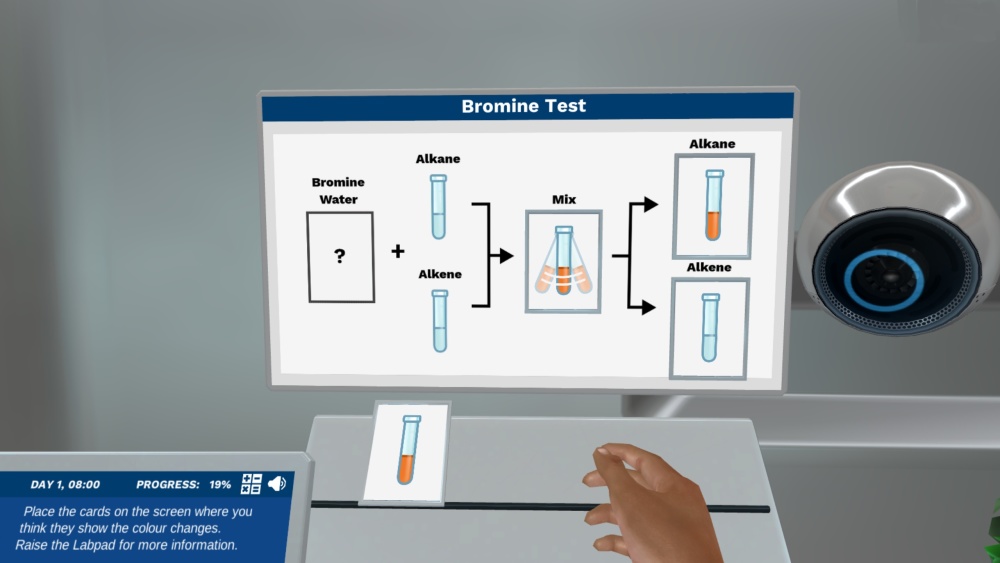 The element bromine is caustic, poisonous, and a threat to the environment. Burns can occur in the digestive tract, the respiratory tract, the eyes, and the skin when bromine is present. Because it is a powerful oxidant and potentially lethal if inhaled, avoid doing so. A fire could start if this material comes into contact with other substances. Corrosive to metal. Carbon tetrachloride is a carcinogenic substance. The chemical chloroform is hazardous. It is recommended that this test be carried out at room temperature.

Why Bromine test is difficult for students?

1. A lack of concept of the fundamental idea

This is one of the primary reasons why the vast majority of pupils do not comprehend how the Bomine test and other biochemical tests carried out for hydrocarbon contamination in food. Students will report that the test becomes less rational and more theoretical when the underlying idea is not adequately explained. Young students need to have a comprehensive understanding of both the "why" (the reason for completing the test) and the "how" (the underlying principle of the test) of each test that is done for a distinct macromolecule.

2. The core concepts of biochemistry are lacking

It is possible that you should reconsider include a lesson on the bromine test in the next session you teach. Many students are unaware of the fundamental distinctions between topics such as "carbohydrates and sugars," "the basic chemistry of bromine water," “carbohydrates vs hydrocarbon”, "the difference types of hydrocarbon," "the nature of molecular bromine," etc. Before moving on to more advanced areas, such as biochemical testing and the reagents used for various tests, one must have a fundamental understanding of carbohydrates, including their structure, the bonds they involve, and so on.

3. Not being aware of its relevance in everyday life

When students are unable to envision themselves conducting research, working in industry, or running their own businesses using what they have learned, it makes taking a biochemistry test seem pointless. Students are frequently presented with the bromine test without being informed of the actual applications of the technique. The learning process becomes uninteresting and unconducive as a result of this.

Give students the idea of hydrocarbons. Any of the organic chemical compounds of the hydrocarbon class only include the atoms carbon (C) and hydrogen (H). The hydrogen atoms bind to the carbon atoms in various ways to create the compound's structural framework. The main components of natural gas and petroleum are hydrocarbons. They are used as fuels, lubricants, and raw materials for making industrial chemicals, rubber, polymers, fibers, solvents, and explosives.  In nature, there are many of hydrocarbons. In addition to being a component of fossil fuels, they are also found in trees and plants, such as carrots and green leaves, where they can be found as carotenoid pigments. The sorts of chemical bonds that hold the atoms of a hydrocarbon's constituent molecules together have a significant role in determining its structure and chemical composition.

2. Are there different types of hydrocarbons?

Give students an idea of the history that how hydrocarbons are categorized. According to their origins and characteristics, hydrocarbons were categorized by nineteenth-century chemists as either aliphatic or aromatic.

The chemical decomposition of oils or fats produces aliphatic hydrocarbons, which are named from the Greek word for fat, aleiphar. Alkanes, alkenes, and alkynes are the three categories.

3. Show them how to approach scientifically

One of the many different biochemical tests that are utilized in academic research as well as the R&D processes of various corporations is known as the bromine test. If you teach your pupils how to approach an issue scientifically, it will be easier for them to reason out the circumstances in which the bromine test should and should not be used. Due to this, they will be better able to recognize the strategies' application to practical situations. In addition to this, it will increase their self-assurance in applying theoretical concepts to actual situations.

4. Showcase the method in detail.

Students who participate in hands-on learning experiences using laboratory techniques are more likely to recall the content of the lessons as well as the specifics of those lessons. We know that it is not always practical for educators to run individual practice sessions for each experiment, and we respect this limitation. If this is the case, one of our recommendations is to perform a demonstration of the experiment at least. Students might find the Bromine test to be rather interesting when they see the color change in front of their eyes because the test is dependent on a chromogenic change, which means a change in color. In addition, if you want to get more students involved in the experiment, you might ask them to bring a range of foods from home that they think contain a lot of unsaturated carbs so that you may include them in the experiment. This would allow you to test the students' hypotheses.

At Labster, we are aware of the difficulties teachers and students encounter. We, therefore, offer present-day educators the chance to utilize Labster's Bromine Test simulation to its full potential. It transports your students to a virtual setting where they may see how bromine reacts with unsaturated bonds.

They will examine the process at the molecular level under the microscope. Test your abilities in experimental mode and aid chemists in locating their incorrectly labeled liquids. Your kids won't have to struggle any longer because our gamified interactive simulation of the bromine test (https://www.labster.com/simulations/bromine-test-for-unsaturated-bonds/) will come to your rescue. Our virtual learning platform uses this method of interactive, immersive instruction to introduce future scientists to the "basics of their particular fields" in detail.