Seals are carnivorous, semi-aquatic, and primarily marine mammals. Seals store oxygen in their lungs, blood, and muscles. They have a large blood volume, which allows them to store large amounts of oxygen for use during diving. 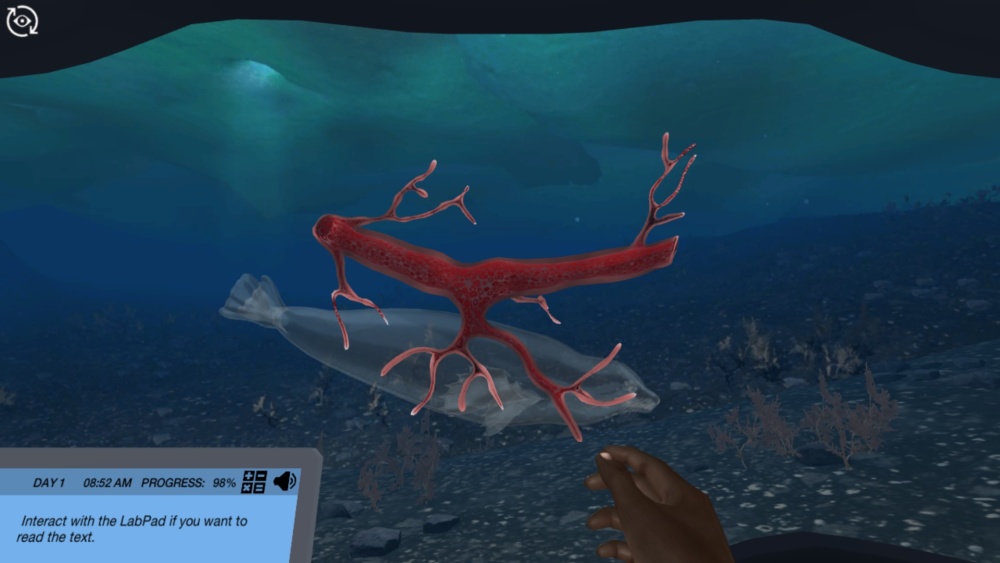 Figure 1: An image from cardio-respiratory simulation from Labster. It is available for High School and University/College courses.

Seals have larger lungs than humans because they are also larger animals, but there is more oxygen in the blood than in the lungs. 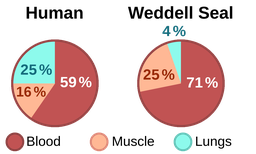 Read on for some thoughts on why this can be a tough topic for teachers and students, five suggestions for changing the situation, and the benefits of using a virtual lab.

Why Can Teaching Cardio-respiratory Physiology Be So uninteresting?

There are three reasons why understanding cardio-respiratory physiology can be difficult for even the most active student.

The mechanism of breathing occurs at a cellular level. You cannot see or feel it. Not being able to imagine how seals efficiently store oxygen within themselves and not understanding its relevance to the real world can frustrate studies and make it difficult for students to stay motivated.

2. Adaptability is an advantage

Seals have several cardio-respiratory adaptations that allow them to dive to depths of 600m for long periods. These include relatively smaller lungs than humans, high levels of myoglobin in muscles compared to humans, and high levels of hemoglobin and blood volume in humans.

As you can see in the image above, seal airways are reinforced with muscle and/or cartilage, which allows them to compress and avoid bending and in the image below you can see a summary of the main adaptations that seals have that allow them to make deep and long dives. 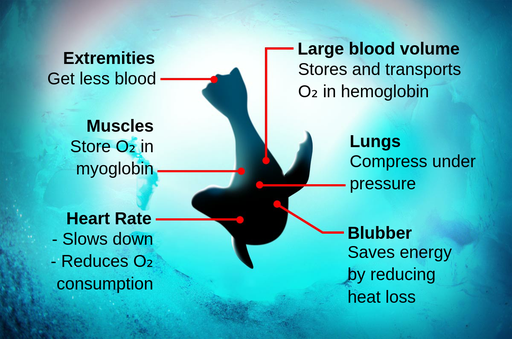 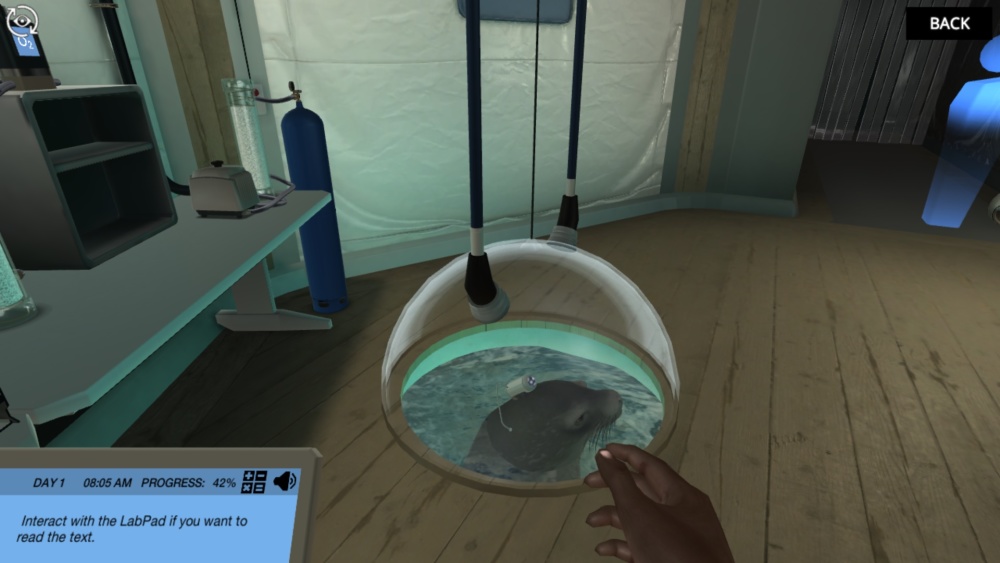 Figure 5: An image from cardio-respiratory simulation from Labster. It is available for High School and University/College courses.

Measurement of blood lactate concentrations in Weddell seals and emperor penguins before and after diving led to the definition of the aerobic dive limit (ADL) as the duration of the dive after which there was an increase in post-dive lactate concentration. For all other species where there were no pre- and post-dive lactate measurements, the dive aerobic limit was calculated by dividing usable oxygen stores by the estimated level of oxygen consumption during the dive. Using both approaches because Weddell seals can dive at least 2-3 times longer than their ADL. This means that the ADL still has usable oxygen in storage. The following are the equations used to calculate oxygen stores and the limits for aerobic diving from reserves. For calculating the oxygen stored in the lungs

Calculate oxygen stored in the blood

Calculate oxygen stored in the muscle

Now that the discussion of student challenges has ended on this topic, here are five things you can incorporate into a cardio-respiratory physiology class to make it more engaging, accessible, and fun for you and your students.

1. A discovery that brings light into the darkness

The Weddell seal was discovered and named in the 1820s during an expedition led by British seal captain James Weddell in the region of the Southern Ocean now referred to as the Weddell Sea.

2. Connect it to the real world

F is the flow rate (mL/min), FIO2 is the oxygen entering the dome, FEO2 is the oxygen exiting and m is the seal mass (kg). To calculate the rate of oxygen consumption during a dive, time is also added to the equation:

F is the flow rate (ml/min), FIO2 is the oxygen entering the dome, FEO2 is the oxygen leaving the dome, m is the seal mass (kg) and t is the duration of the dive (min). Compared to humans, harbor seals show a markedly reduced increase in oxygen consumption during diving.

If pre- and post-dive blood lactate measurements are not available, the aerobic dive limit (ADL) can be calculated by dividing usable oxygen stores by the estimated level of oxygen consumption during the dive. However, Weddell seals can dive at least 2-3 times longer than the ADL. This means that the ADL still has usable oxygen in storage.

Weddell seals can perform aerobic dives, in which ATP is made from oxygen, as well as partially anaerobic dives, where ATP is made from lactate. It was observed that no lactate was accumulated during the 12-min dive and that 8mmol lactate was accumulated during the 30-min dive. To find out what percentage of ATP is produced by aerobic or anaerobic metabolism, all we have to do is divide the corresponding number by the total and multiply by 100.

Some general terms for all clinical studies, be it anatomy, physiology, or cardio-respiratory physiology. Some examples are:

As students often find it difficult to begin their science journey with so many new terms and concepts being presented, there is a need to make teaching this topic more interactive. One way to achieve more excitement and active student participation is to use Labster's cardio-respiratory physiology simulation, which is designed to help students learn about oxygen reserves, aerobic diving pathways, aerobic and anaerobic ATP production, and specific cardio-respiratory adaptations that allow seals to make deep, long dives that are impossible for humans to do without diving equipment.

Labster's virtual laboratory simulation provides many benefits, such as appreciating interactive diving with seals, where you can watch a summary of their basic cardio-respiratory adaptations for diving. 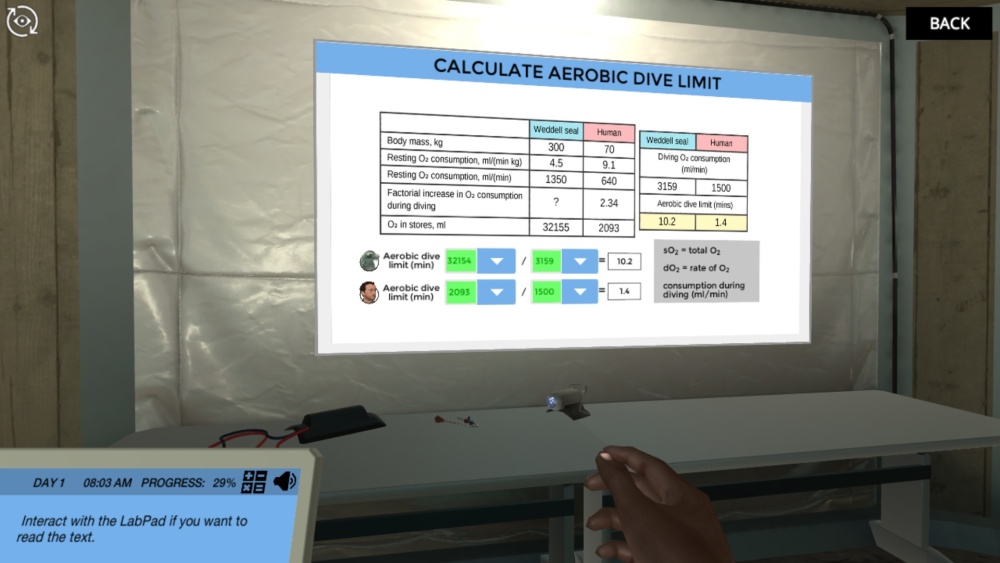 You can learn more from cardio-respiratory physiology simulation from Labster here, or contact us to find out how virtual labs can be used with your students.