The majestic atmosphere of our planet Earth has been here for millions of years and has caught the attention of human life ever since. Though commonly believed that the atmosphere’s age must be equal to the age of this planet, it isn’t true. Yes, planet Earth was formed first and existed even without the atmosphere. It was only after several intermediate steps that the Earth’s atmosphere came into existence.

Students are taught about the different aspects of Earth's realms or geospheres like biosphere, lithosphere, pedosphere, hydrosphere, and atmosphere that cumulatively ensure the sustenance of life on this planet. The atmosphere is one of the most important realms that envelopes the planet in form of gasses and extends up to an approximate range of 10,000 km above the Earth's surface. The phenomenal composition of the atmosphere and its even more striking history of development spanning over millions of years has left mankind spellbound even to date!

With such an interesting developmental history and composition, one can wonder why students would not, particularly like this topic. Almost every high school and college curriculum tries to introduce this subject as a ‘preliminary topic’ to understand more complex ones. But we have observed that students are often challenged when studying this preliminary subject and hence clarifying the air of doubt and confusion around it gains pivotal importance.

We, at Labster, understand the complexities of this subject. This article can provide some help to educators as it attempts to identify the major obstacles encountered by students while studying this topic. It also lists practical solutions that teachers and educators can incorporate in their next class. By the end, we’ll convince you why a virtual lab simulation will prove useful not only for your students but also for you as an educator to deliver concepts more efficiently.

Why can Earth's Atmosphere be tricky to teach or learn?

There are 3 reasons why students dread and get confused about the topic of Earth's Atmosphere. Acknowledging these blocks is the first step toward making the topic more approachable.

1. It feels conjectural and too philosophical

The mere introduction of Earth’s atmosphere and its development which is explained to have occurred some 4 million years ago feels quite theoretical to students. It makes no sense to them as none of us or even far-ancestors existed at that time to testify to the development. Because of this time estimation and association of different events in the atmosphere’s development to different geological phases, students fail to approach and understand the topic with logic; rather they feel it’s more philosophical!

If the students manage to somehow overcome the 1st issues listed above, the second major issue is the breadth of the subject. The Earth’s atmosphere is not constituted by one or two gases. It’s an admixture of a range of gases like oxygen, carbon dioxide, nitrogen oxides (many types), neon, hydrogen, argon, etc. The development of Earth’s atmosphere is another massive topic for students as there were too many factors that contributed to its development like volcanism, ocean development, the evolution of life and photosynthesis, the Great Oxidation Event, the Cambrian explosion, etc. These details tend to overwhelm the students who have no idea about these terminologies, let alone their roles in the development of the atmosphere.

3. The lack of sufficient visual tools

Since the scale of the atmosphere is beyond the limit of our visualization, this topic often becomes quite theoretical and invites no engagement in classroom teaching. When educators try methods to make it visually engaging and interactive using 3D models and projects, it kills a lot of their time as the details are too many. The lack of viable options in the form of videos and interactive simulations is so little or null that educators fail to understand and figure out a way to make the topic interesting yet informative for students. Eventually, students aren’t left with many options to understand the science behind the atmospheric constitution and its evolution and are forced to cram details with zero understanding and rationale.

To address the issues encountered while teaching about Earth's Atmosphere, educators can engage the under-listed solutions in their classes. These can decode many different aspects of biomes. Not only can they make teaching easier for educators like you, but they will also make lessons clearer and easier to assimilate for your students.

1. Make sense of the timeline

Earth’s atmosphere developed a long time ago which is not easily comprehensible for any human being; whether you are a scientist or a high school student. But you can explain this timeline to your students by explaining how scientists have meticulously worked on several pieces of evidence, conducted innumerable in-house experiments, and then worked on these “estimations of dates”.

It becomes important that you explain to your students that these dates of Earth’s formation around 4.6 billion years ago (bya) and subsequent formation of Earth’s first, second, and third atmospheres are “ESTIMATES” and not “ABSOLUTES”! Explaining this can clear the air of speculations and the idea of this topic ‘being too conjectural’. This can make the topic sound more real to students and hence more worthy.

Once they are convinced, then you can explain the timeline with the major events associated with each time phase. For instance, oxygen didn’t exist in the Earth’s atmosphere till the ‘third-atmosphere development phase’ occurred around 2.4 billion years ago. Only after the occurrence of the Great Oxygenation Event, oxygen appeared for the very first time on the face of Earth. Again, emphasize the point that this “2.4 billion years ago” is an estimated time range when oxygen is “believed” to have appeared. 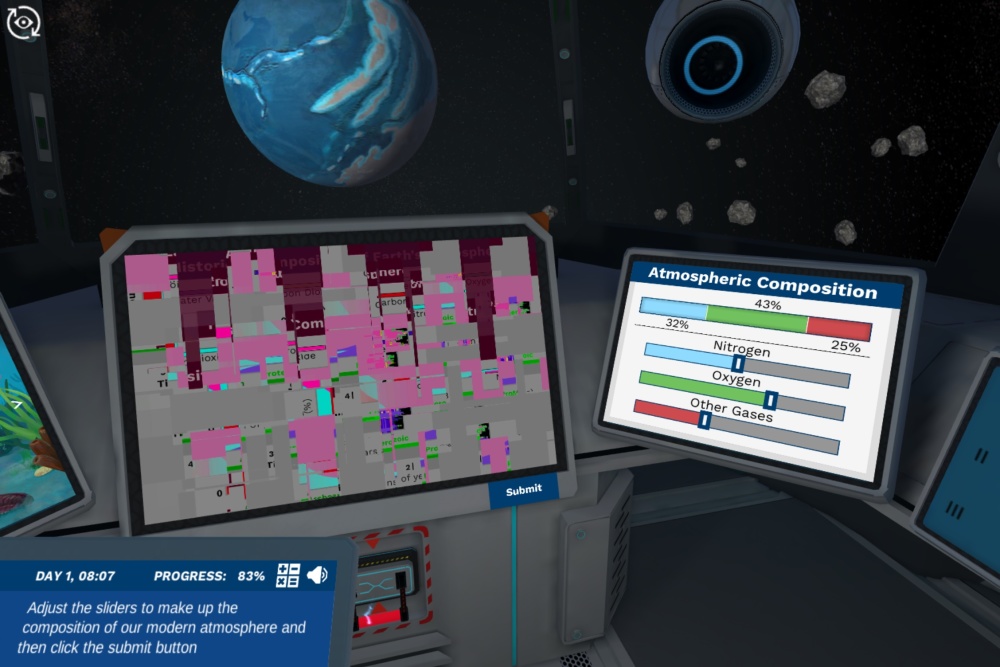 Figure: A snippet from the Earth’s Atmosphere simulation by Labster showing the composition of Earth’s atmosphere. Full simulation is available for High School classes.

2. Explain the main contributing factors with a rationale

A long list of factors accounts for the development of the Earth’s atmosphere. Students are often seen hassling to learn these factors without rationally understanding their roles. Educators can take an advent and explain the rationale behind all their contributions.

We list a few of them for you to get your students energized about this topic!

Similarly, you can explain the roles of oceans, the evolution of life, the photosynthesis process, etc in the development of the atmosphere. 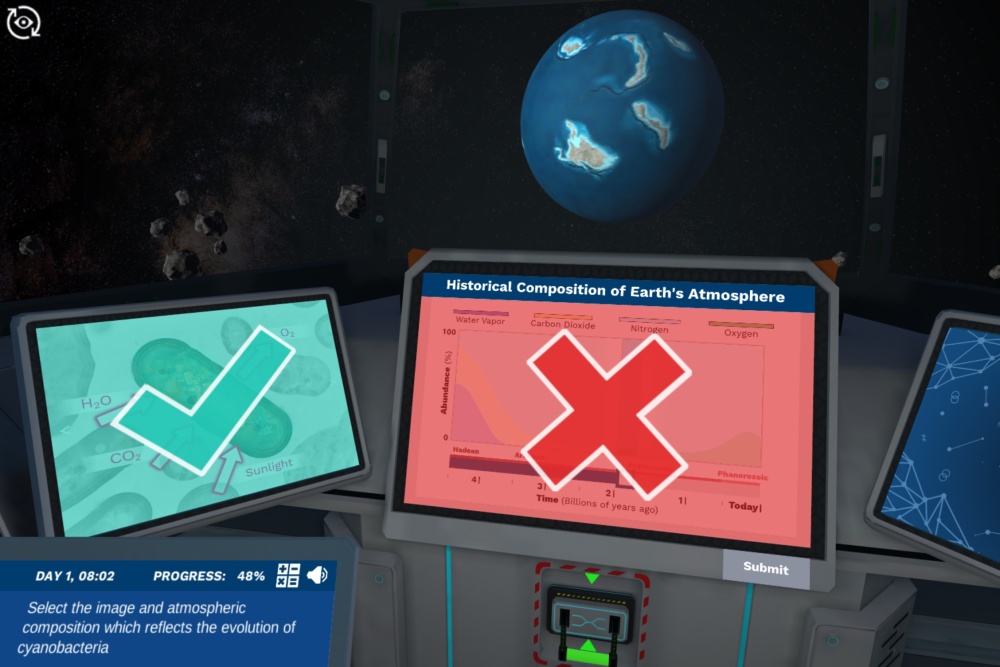 Figure: A snippet from the Earth’s Atmosphere simulation by Labster showing the importance of the “evolution of life” in the development of the Earth’s atmosphere. Full simulation is available for High School classes.

3. Make it sound important for the survival of the human creed

Similarly, you can take one gas or element at a time that constitutes the Earth’s atmosphere and stress their indispensable roles. 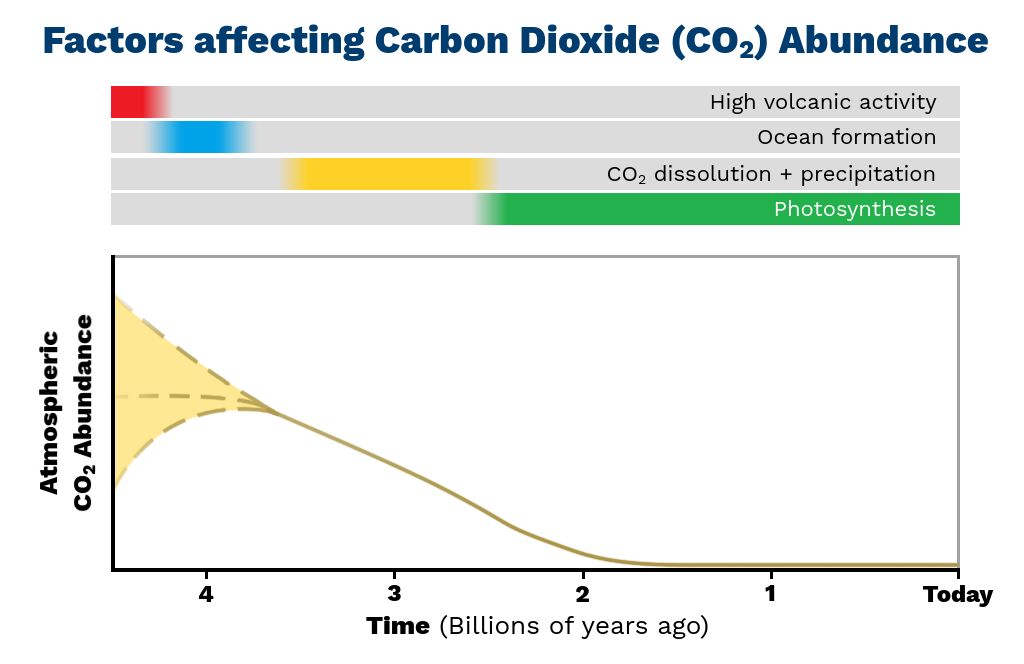 Figure: A graphical representation of the variations in the level of atmospheric carbon dioxide over the Earth’s history. Image Source 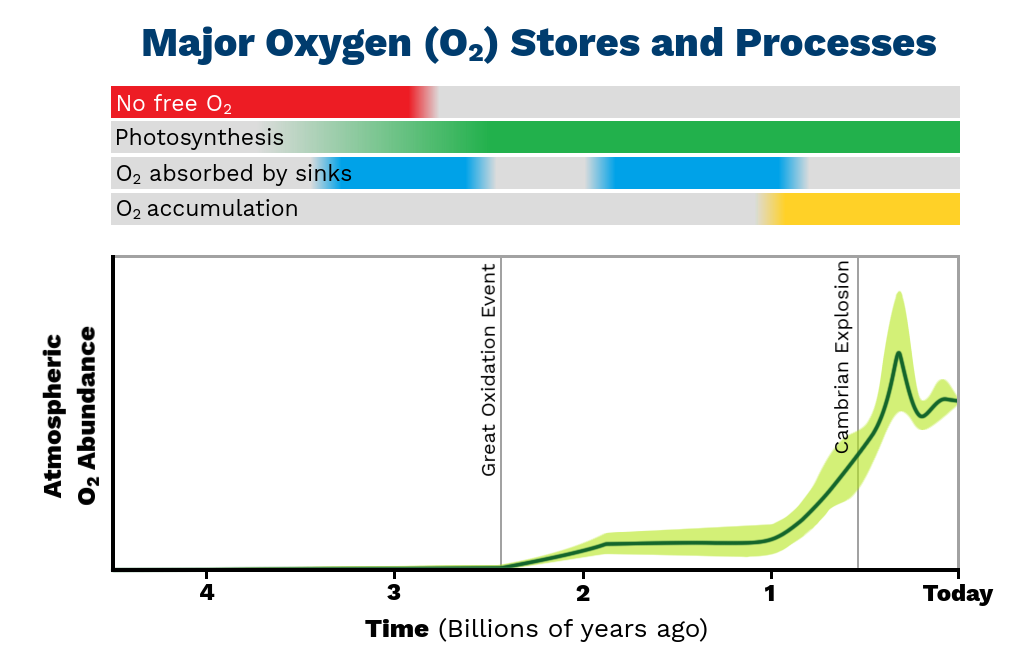 Figure: A graphical representation of the variations in the level of atmospheric oxygen over the Earth’s history. You can explain the contributions of ‘The Great Oxidation Event and the ‘Cambrian Explosion’ as postulated by many experts. Image Source

This is another way of making the classes more interactive. Plus, talking about these pressing issues of climate change, global warming, ozone depletion and many more anthropogenically ignited issues is important. Since the students are younger than us and the torchbearers of the era to come, making them understand how the Earth’s atmosphere has changed (in a bad way) over the past 100-200 years is very important. Educators should engage their students in short research works where students should access the recent reports from international conventions discussing these issues. This can serve as a very effective tool to make them understand the different aspects of the topic; the atmosphere’s importance, composition, changes, sensitivities, and much more.

Unabated pollution, emission of greenhouse gases, disruption of global cycles (carbon, nitrogen, phosphorus, water cycles), accumulation of heaps of waste, and many more such problems have all negatively implicated the Earth’s atmosphere.

Figure: A snippet from the Earth’s Atmosphere simulation by Labster showing the historical composition of the Earth’s atmosphere. Full simulation is available for High School classes.

Since the topic of Earth’s atmosphere is a massive one with a lot to comprehend and assimilate for students, we recommend modern-day educators make the most of the Earth’s Atmosphere simulation from Labster.

Your students can delve deeper into the Earth’s developmental history and learn more about the monumental events that shaped the Earth’s atmosphere as we see it today. They can engage in critical discussion over several contending theories about development and gather evidence that supports or reject them.

Since this is a virtual experience, your students can fasten their seatbelts and time travel to different geological periods in a hi-tech spaceship and learn about the conditions and factors that finely tuned the Earth’s atmosphere.

Educators can gather the undivided attention and interest of their students as the Earth’s Atmosphere simulation also comes with interactive quizzes.  This is teaching made easier and more insightful. With better visual options, the topic will now come in a free-flowing manner to your students.

By using this way of active and immersive teaching, our virtual learning platform takes an advent in the field of Science to make the upcoming scientists thorough with the “basics of their respective subjects”.

Figure: A snippet from the Earth’s Atmosphere simulation by Labster showing the historical composition of the Earth’s atmosphere. Full simulation is available for High School classes.

You can learn more about the Earth’s Atmosphere simulation here or get in touch to find out how you can start using virtual labs with your students.