5 Ways to Make the Female Reproductive System Easier to Learn

The anatomy and physiology of the female reproductive system are essential aspects of human biology and reproduction. This localized system found in the pelvic cavity consists of primary sex organs and accessory organs. It helps maintain hormone levels, produces eggs, fosters a fetus, and enables females to bring a child into this world.

The primary sex organs in the female reproductive system include two ovaries (right and left) which produce egg cells (Oocytes) and regulate some hormones. The egg cells undergo a series of changes in the ovaries and eventually enter into the female reproductive tract, primarily composed of uterine/fallopian tubes, uterus, and vagina. This tract serves as a site for egg fertilization, implantation, and development and delivery of a baby.

If the egg is not fertilized or implanted, the uterine lining disintegrates, resulting in the menstrual flow. The female reproductive system is activated briefly from puberty to menopause. The egg production process in ovaries could be affected by factors like age, diet, stress, smoking, physical activity/inactivity, etc.

At the top of complex scientific ideas, social norms attached to the topic challenge teaching reproductive systems at the college/university level. However, there are ways to make this a relatively comfortable, enjoyable, and approachable topic for all students. This article will cover the top three reasons that make it a tricky one, along with five effective strategies that would help you make the teaching and learning process flawless. 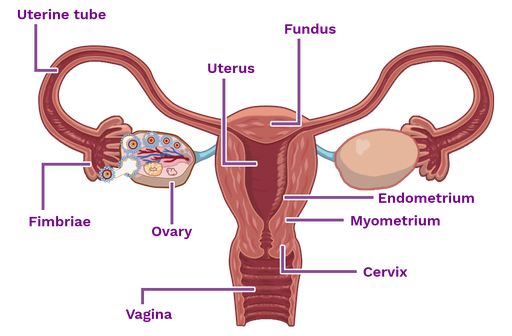 Why could the female reproductive system be tricky?

The anatomy and physiology of the female reproductive system is a complex process that makes students and educators feel overwhelmed. A cultural, social, and religious stigma is attached to the topic taught in college/universities. This adds pressure on educators and makes it the trickiest topic to teach in biology.

Students quickly get demotivated as they continue to learn complex anatomy, followed by physiology. For instance, problems in ovulation lead to health issues, like tumors or Polycystic ovary syndrome (PCOS). Female students could relate to the topic and might get frightened by introducing common health problems associated with their reproductive system. Teachers always look for ways to break this content-heavy topic into simpler parts. Still, the intricacies of this particular system remain a challenge for educators.

3. The hormones play an essential role in the egg's journey

The levels of sex hormones fluctuate and somehow regulate the production of egg cells in females. When discussing the follicular and luteinizing phases, the positive and negative feedback system in an egg's journey could get more complicated.

As the name suggests, the follicular phase deals with the follicles enclosing egg cells. The brain releases follicle-stimulating hormone (FSH) and luteinizing hormone (LH) that stimulates egg growth (increasing the size of the follicle). These hormones enhance the production of another critical female hormone, i.e., estrogen. The high estrogen levels signal and decreases the production of FSH. This delicate balance is crucial in limiting the number of follicles and egg release. All follicles do not make it till the end; only the dominant follicle(s) continues to maturity while all other disintegrates.

The high LH and estrogen levels release the egg from the ovary (ovulation), which goes into the fallopian tube to decide its fate. The empty ovarian follicle transitions into another structure known as the corpus luteum. It stimulates the release of estrogen and another sex hormone called progesterone, essential in preparing the uterus wall for implantation. In case of no fertilization, the corpus luteum disintegrates, and a new cycle from the follicular phase starts. The egg journey gets tricker with introducing new concepts and depth at the college/university level.

The female reproductive system could be made a more approachable and easy-to-read topic for students by following the following tricks.

1. Highlight the misconceptions along with the journey that led to the understanding of the female reproductive system

Storytelling is an excellent way of hooking students and keeping them engaged as they learn about struggles that led to the discovery of important scientific information. The history of the discovery of the female reproductive system faced many challenges as the people in the past were more conservative and sensitive toward the topic. However, physicians, philosophers, and scientists have always shown a great interest in understanding the mysteries behind life formation. The secrets of the origin of life lie within the female bodies or the female reproductive system. Due to a lack of better understanding, the initial idea about this system was that it moves freely inside the body (which we know is not true).

The first description of ovaries was presented by an anatomist Soranus of Ephesus (ca.50 AD), who named now known ovaries as didymi (paired organs). Much later, in 1555, Vesalius gave the first convincing description of follicles in ovary and corpus luteum, a major breakthrough in human biology. In 1562, Fallopius (student of Vesalius) introduced the fallopian tubes, which explains the name. Fallopius and Fabricius published the first most authentic book "('De Formato Foetu,' 1604" on the comparative anatomy of the female reproductive system. William Harvey, 1651 a student of Fabricius, studied the science behind reproduction but failed to uncover the process of conception correctly. He presented the oocyte as the product of conception, which we soon came to know as incorrect. However, he also played an essential role in understanding some important aspects, like the birth of twins or triplets.

2. Share interesting facts to spark an interest in the topic

The scads of information (including but not limited to complicated anatomical terms) would make the female reproductive system a rather tedious topic. Sharing exciting or fun facts is one way to make any topic more relatable for students. Students get intrigued by fascinating facts and show a positive attitude toward learning about the world around them. Sharing such knowledge at the college/university level boosts the learning process and makes students more engaged.

Here are a few fun facts you could pitch in your class to wake a dozing audience.

The journey of the egg following the follicular, ovulatory, and luteal phases could be accessible and engaging for the students using 3D models and simulations. The 3D models of reproductive systems are available at most colleges/universities; however, you should look at Labster's simulations. This interactive and fun learning experience makes things easy for educators and teachers.

The snippet below shows how you could motivate your students to learn about the female reproductive anatomy while making all the intricate scientific terms less scary. The 3D simulations provide more physiologically relevant settings than 3D models because they closely resemble microenvironments. 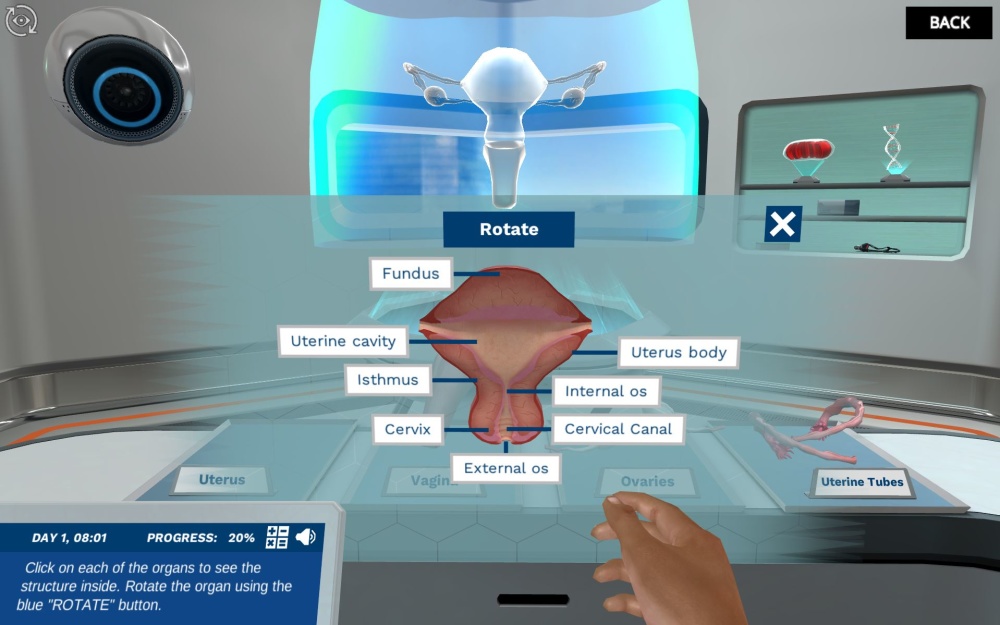 The female reproductive system is a complicated and tricky topic for college/university students to understand and memorize. The tips discussed above would help with the understanding, but students need to memorize the complex vocabulary and stream of information for the exams.

Here are a few tricks to help students memorize the anatomy of the female reproductive system and an egg's journey.

A virtual laboratory simulation is a great way to teach the female reproductive system. At Labster, we're dedicated to delivering fully interactive advanced laboratory simulations that utilize gamification elements like storytelling and scoring systems inside an immersive and engaging 3D universe.

Check out Labster's simulations for the female reproductive system. You can take advantage of the opportunity to closely follow the egg creation journey through the follicular, ovulation, and secretory phases. You will recognize and explain the stages of the ovarian cycle and be able to define the placement of the egg throughout its entire journey from the ovaries through the uterine tubes to the uterus. 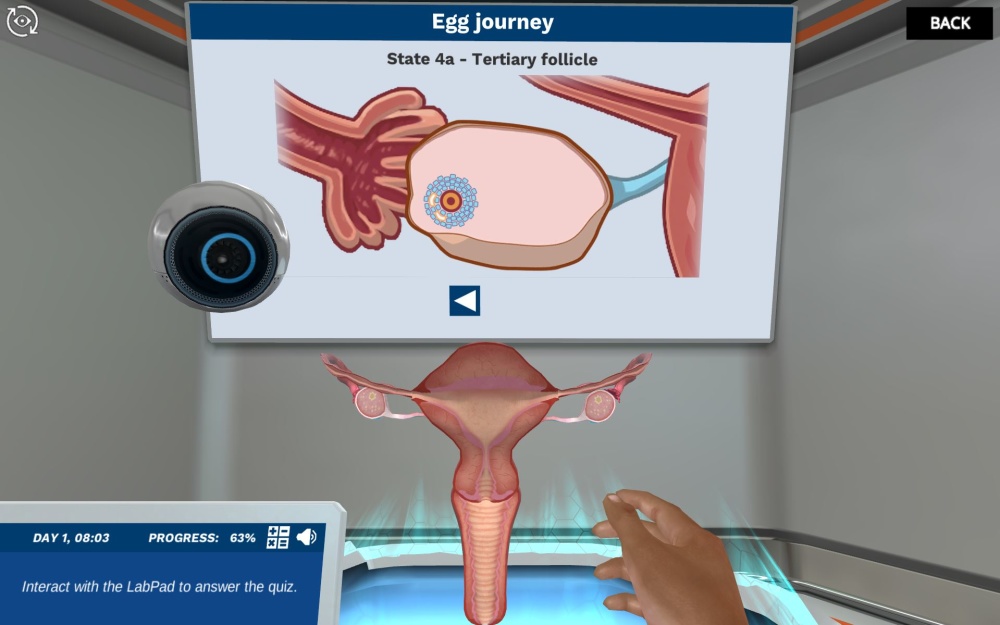