The cells in our body continually divide in a controlled way to help us grow, regenerate and reproduce. For instance, the cells in our hair, nails, and skin are constantly duplicating, which allows these organs to grow and regenerate. The cell division in eukaryotes could be divided into two types, i.e., mitosis and meiosis.

Mitosis is observed in both prokaryotes and eukaryotes, which helps in cell growth and proliferation. Contrary to this, meiosis is a more complex process occurring only in eukaryotes responsible for reproduction. There are two types of cells, somatic cells and gametes, pre-destined to follow either mitotic or meiotic cell division. Moreover, many similarities and differences between mitosis and meiosis make students anxious.

Cell division gets more complicated at the college/university level with the introduction of new terms and aspects like inheritance, sex-linked diseases, and cancer therapy. This article will discuss why mitosis and meiosis could be tricky topics and five effective ways of making them rather enjoyable and approachable topics for students.

Reasons why cell division and inheritance could be a tricky topic

Mitosis and meiosis are subdivided into different phases. The chromosomes in parental cells act in a specific way to ensure equal distribution of genetic material in daughter cells. Slight disruption in this distribution would lead to uncontrolled cell division (cancer) or the development of genetic disorders. Such complex characters make teaching and learning cell division a tricky topic. We'll discuss the top three reasons (experienced by most educators) that make fundamental scientific topics tricky.

1. Using a microscope to identify different phases of mitosis and meiosis

The crossing-over of chromosomes is fascinating, but students get overwhelmed as they fail to identify the paternal and maternal chromosomes. The process of cytokinesis is slightly different in animal and plant cells. In animals, the cell membrane starts pinching inward to divide the cell; in plants, the division begins from inside. It is difficult for students to identify the cell's origin at this stage.

2. The comparison between mitosis and meiosis

Walther Flehming discovered mitosis, while Oscar Hertwig discovered meiosis. Mitosis occurs in all cells (somatic cells), while meiosis only occurs in gametes (germ cells) or reproductive cells. The first part of meiosis, termed "Meiosis I," follows the exact similar phases of mitosis (with different chromosomal action), while "Meiosis II" is entirely different. The differences and similarities between mitosis and meiosis are content-heavy making it difficult for students. The comparison discussed below is between the phases of mitosis and meiosis I.

Anaphase: In mitosis, the spindle fiber pulls chromatids apart, which moves towards the poles, while in meiosis, the sister chromatids remain intact and homologous chromosomes drift towards the opposite poles.

There are also some similarities like mitosis and meiosis occur in the cell nuclei and involve DNA synthesis. The similarities or differences are complicated and content-heavy, making it a tricky topic for educators and students.

3. The pattern of inheritance in sex-linked diseases/disorders

The genes are responsible for passing a trait or disorder to the next generation. Genes are located on chromosomes (X or Y). Females have two X chromosomes (genotype-XX), while males have one X and one Y chromosome (genotype-XY). The genes on either chromosome could either be dominant or recessive. The X-linked recessive genes only express in females if both copies of the gene (one on each chromosome) are the same, while in males, only one copy of a gene (on one X chromosome) is capable of expressing the disorder or trait. Females with a copy of only one affected gene may not exhibit any disorder symptoms.

For instance, color blindness or hemophilia are X-linked recessive disorders, and males have a higher chance of expressing such disorders due to genetic makeup. Daughters may act as carriers and pass the disease on next generation sons. Such complex inheritance trends could confuse students initially, but learning additional concepts like 'Punnett square' and 'Mendel's law of inheritance' might help.

Educators could adopt many ways to make cell division and inheritance a more approachable topic for students. The five most effective and practical strategies help make this topic fun to teach and learn.

One of the most effective ways to get students excited about cell division and inheritance is to share interesting facts. Some of the fun facts that educators could use to make students feel at ease while studying such complex biological processes are as follows:

Many terms repeatedly used in this topic are usually familiar to college/university students. However, it is a good idea to help students freshen up their memory before diving deep into the intricate details. Knowing the following terms is crucial for students to comprehend cell division easily.

Mitosis is the type of cell division in which a cell splits into two daughter cells, identical to parent cells.

Meiosis is the type of cell division in which a cell splits into four daughter cells, each having half the number of chromosomes.

Sister chromatids are identical copies of a chromosome formed by DNA replication. Both copies are held together by the centromere.

Homologous chromosomes are pairs of chromosomes in which one comes from the mother and the other from the father. The chromosomes have the same gene sequence, centromere location, and chromosomal length.

Gametes are the haploid reproductive cells that fuse during reproduction to produce a diploid zygote (2n). The female gamete is egg (n), while the male gamete is sperm (n).

Crossing over is exchanging genetic material between two non-sister chromatids of homologous chromosomes in meiosis.

The process of mitosis, meiosis, or inheritance occurs at the molecular level, which makes it abstract for students. Students would be able to understand such biological concepts better with some visual representation. Teachers could take advantage of the technology to use 3D models showing the events like crossing over or equal distribution of chromosomes.

The snippet shown below is an example of a visual representation that would make students intrigued and excited to understand the division of cells.

A virtual laboratory simulation is a great way to teach cell division and inheritance. At Labster, we're dedicated to delivering fully interactive advanced laboratory simulations that utilize gamification elements like storytelling and scoring systems inside an immersive and engaging 3D universe.

Check out Labster's simulations for Meiosis, Mitosis, and Plant Gametes; Meiosis: How is color blindness inherited?; Meiosis: Understand how traits are inherited; and Mitosis: Using a toxic compound from the yew tree in cancer therapy. At the end of these simulations, you'll be able to explore the phases of mitosis and meiosis. Investigate the principles of Mendelian inheritance and discover how color blindness is inherited by observing chromosomal rearrangement in an animation. Moreover, you'll find out how traits are inherited and the essential roles of cell division. You'll also get a chance to learn how a poisonous compound from a yew tree can be used in cancer therapy.

Lasbter's snippet below highlights the chromosomal differences in normal and color-blinded individuals. 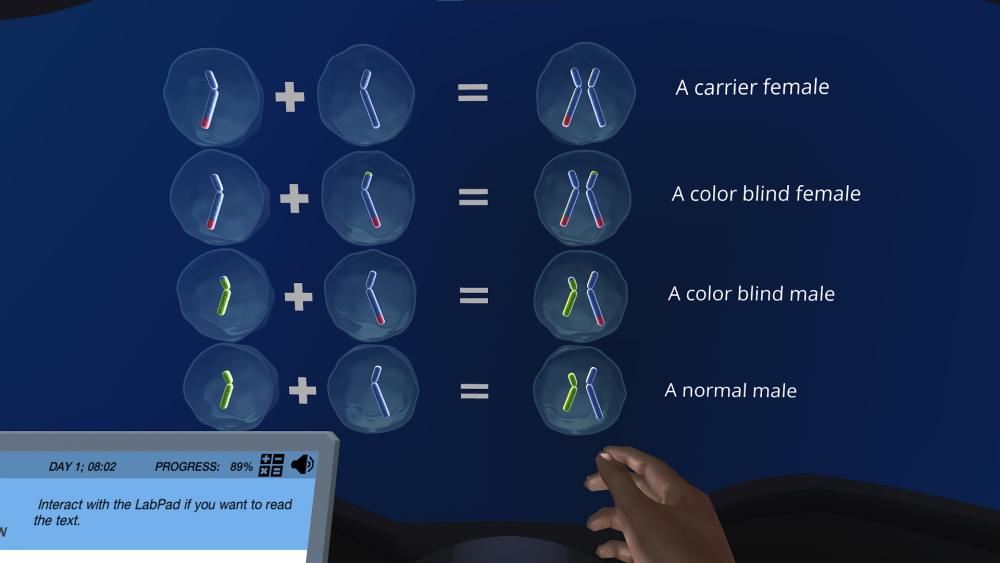