5 Ways to Get Students Energized about Basic Electricity

Electricity? We are surrounded by it! The lights that brighten our homes, the air conditioners that cool our rooms, and the machines we use to wash our clothing, all run on electricity. In short, they are countless examples of appliances that run on electricity. But wait, have you figured out what is it and how it flows around?

The basics explained may be easy for teachers, but for students, these theoretical concepts are dry and boring.  If you are interested in energizing your students about basic electricity, then you may benefit from reading through this article.

We will cover the three reasons why the concept can be trickier for students to comprehend and explore five ways to make electricity exciting and interesting.

Why does the concept of electricity seem tricky?

The concept of electricity can be trickier for some students for the following three reasons.

For students, the concept of electricity is too abstract. They usually prefer to learn things that can be easily touched or visualized. However, in the case of electricity, there is an atomic level movement of free electrons, which cannot be shown to students. So, without any visual representation, it becomes difficult for teachers to explain and students to understand.

To understand electricity, first, students need to learn about charges, their types, and how their flow becomes electricity. Studying electricity, they further across the concepts of voltage, resistance, current, and their SI units; this seems to be a lot for students to digest in.

3. Circuits Can Be Confusing

Understanding the flow of current through a simple bulb and power source may be simple for diligent students. However, as you increase the components, it is difficult for students to figure out how the current flows through the circuit. And what results will they see on changing current and voltage in the circuit?

Moreover, regarding this concept, students get to solve different circuit diagrams for unknown values, which is another reason, they don’t find the subject matter interesting.

With a few reasons why the topic seems boring and abstract for students, here are five ways to make concepts of basic electricity more approachable.

1. Show them People Behind Science

For students, theoretical concepts are dry and boring. However, when you tell them about the people who discovered it, they become curious and eager to learn. Since most scientific discoveries are quite interesting, students may be more likely to listen to them.

Here, you can tell them the stories of Benjamin Franklin and Michael Faraday who paved the way for the discovery and use of electricity.

Benjamin Franklin is typically credited with discovering electricity. However, there are traces that Greek scientists had some knowledge of static electricity.

Benjamin Franklin was a scientific genius of his time. The most interesting fact people don’t know about Benjamin is that he was a writer and publisher during his early career. He even started his own weekly newspaper.

He developed an interest in electricity in the middle of the eighteenth century. Until then, scientists were primarily familiar with static electricity and experimented with it. Benjamin Franklin advanced the situation significantly. He proposed the idea that electricity contained both positive and negative components and that it moved between these components. He further said that lightning was a type of this flowing electricity.

The electricity rushed down the thread, shocking him. He was fortunate that he didn’t get hurt. However, he won't regret the shock because it supported his theory. Benjamin’s experiment paved the path for further research on electricity.

Just like Benjamin, he wasn’t a physicist from the start. He was a very well-known and experienced chemist who developed the first known compounds of carbon and chlorine. However, during that era, the concept of electromagnetism and electricity was famous among scientists.

Since Faraday had a long experience working in labs for his chemical experiments, he used that to develop the first device which could use electric energy (electricity) and convert it into mechanical energy. It was an electric motor, the first-ever application of electricity.

Nowadays, numerous devices take on electrical energy and convert it into other forms of energy. For instance, fans, LED lights, washing machines, etc.

Electricity is an abstract concept, and you cannot show the microscopic movement of electrons. However, you can use analogies to explain it to them. One famous analogy for explaining how current flows through wires is by discussing a water tank model. 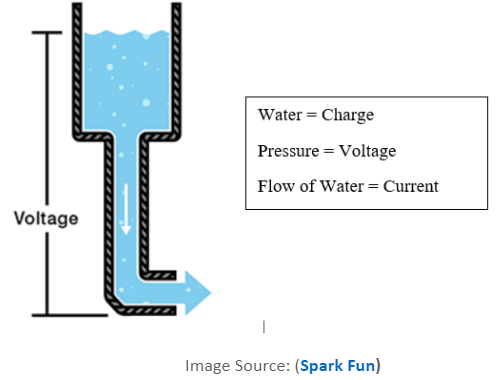 Consider a tank of some height “h” filled with water. For simplicity, ask students to consider water as charges or electrons, pressure as the voltage, and the water tank as the battery which stores charges.

When you will perform an experiment, you will observe that the water flow is higher at the start when the pressure difference between the two ends is more. That means when the voltage is higher, more current flows. However, as the height of the water drops, the rate of flow decreases. The same happens in an electrical circuit, if you reduce the voltage, the light gets dimmer.

3. Use Animations to Explain

Seeing is believing; there is nothing better than an animated visual to understand how a process works. With intriguing animations like the one shown, students can see the movement of electrons in the circuit.  They can visualize what they have learned, gaining a more concrete knowledge of the otherwise abstract process.

The figure from Labster’s Virtual Electricity Lab shows the electrons leave the negative end of the battery, which is at higher potential. They pass the bulb, and lose their energy, as it is converted into light energy. The weak electrons then return back to the positive end. The battery supplies them with potential energy and they return back to the circuit. In this way, the cycle continues until you press on the switch which cuts the path of charges, and the flow of charges stops immediately.

4. Show them the Relevant Applications

The current generation of students is interested in knowing the practical use of topics. They ask themselves, “What do I have to do with it”?; “Why am I learning this?” So, relating the theory with practical applications is most important when teaching any physical sciences subject.

In the current case, where numerous electric gadgets surround us all, your job becomes much easier. Since in the classroom, there are numerous electrical appliances, you can ask students one by one to name a few of those appliances. You will engage them and let them participate in the discussion. 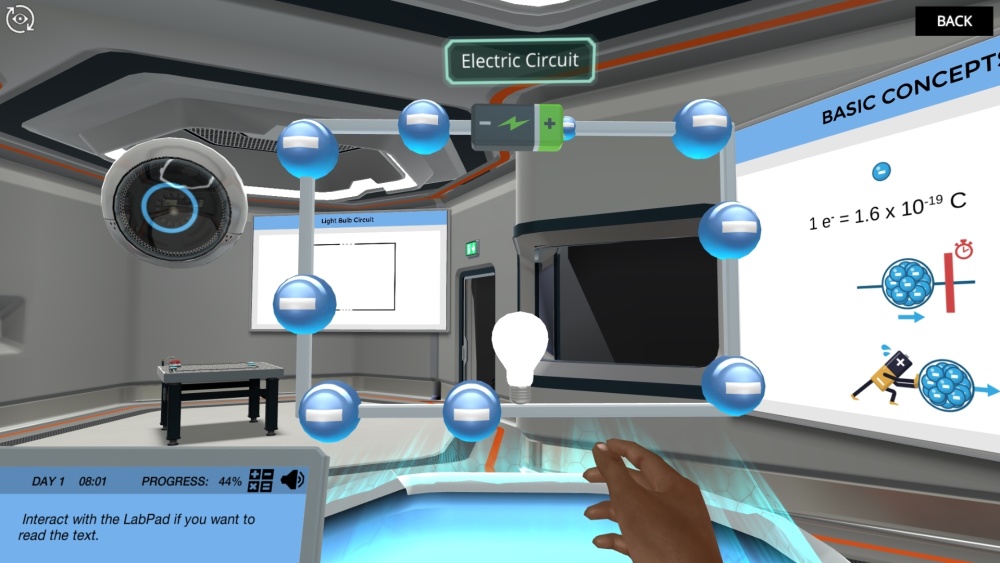 In this reference, you can check out Labster’s Basic Electricity Simulation. In the simulation, students embark on the journey to restore the power supply in their lab. They build on electric circuits and see how changing voltage and current produce different results.

To learn more about Labster simulations and how you can utilize them for teaching students, contact us now.